Why do Townhouses never have decks? (Upgrades) 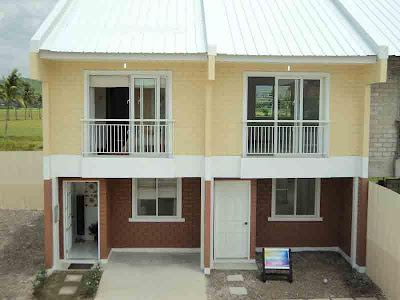 A lot of new home construction is sold with no deck on the house, but rather a french door with a piece of fence across it, so the owner can "add" a deck as an upgrade.   In many developments, these decks never get built for years.   What's up with that?

As I noted in my Upgrades posting, home builders love to sell buyers on the concept of "upgrades".   When Mark sold townhouses in Northern Virginia, he was encouraged to sell these lucrative add-ons, as they added a lot to the bottom line for the builder.   A $400,000 townhome could be "upgraded" to a $500,00 townhome, in short order, simply by selling the deluxe kitchen, upgraded carpeting, and marble bath accents - as well as a finished in-law room in the basement.

The builder makes money on these upgrades, as they don't cost him much more than the basic level of materials.   Labor is the big cost, and whether you use a crappy "contractor grade" carpet or an upscale plush makes little difference to the overall cost.   And since the builder owned a marble business, adding marble accents was a real money-maker for him.

But one upgrade that is rarely sold in most home developments is the deck.    When traveling across America, we see a lot of these "new homes in a cornfield" with sliding glass doors blocked off with little fences, as shown in the photo above.  The homeowner did not opt for the "deck upgrade" and likely won't add one, for many years.

Well, from the builder's point of view, a deck is an additional structure, and something that requires both additional labor and materials.    And the labor involved is not labor you have on-site.   Your framers are not going to be good deck builders, nor are your sheetrock workers, plumbers, or electricians.   You basically have to "farm out" this business to a deck-builder.

So the home builder gets a quote for a deck, doubles the amount, and presents that as an "upgrade" to the buyer.   Not surprisingly, most buyers balk at the high cost of the added deck, and say to themselves, "We'll add the deck later!"

And since they are new home owners - and have financially stressed themselves out over the optional sun nook and upgraded carpet - they can't afford to put the deck on the house, at least for five or ten years.

As a result, you see a lot of these new homes, sans deck, for many years after they are built.

And maybe another reason builders don't want to mess with decks is the liability involved.   When we lived in Northern Virginia, not a year would go by without some tragic deck story hitting the paper.  Harry and Harriet Homeowner contract out to Bubba & Co. to build a deck.   And when it is finished, they have a party, invite all their friends, and crank up the music and have 20 of their friends dancing on the new deck.

Since Bubba & Co. lag-screwed the deck into the siding (and not into anything solid) the deck collapses, injuring, maiming, and perhaps killing some of the guests.   That's about when you wished you had that umbrella liability coverage! 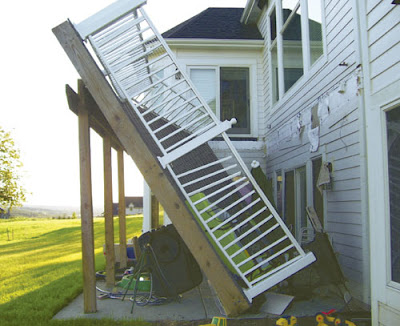 Bolting a deck into the side of a house as the main means of support is not a very good idea, particularly if the bolts are just going into siding.


For this reason, many responsible deck builders put posts near the house, to carry the load of the deck.   The deck may still be bolted to the house (to help keep it from moving) but the load is carried by beams and posts that are independent of the house structure.

So what's the point of this post?  Perhaps none.  It just got me to thinking, after reading my "Upgrades" posting, how many vinyl-clad townhomes-in-a-cornfield we see across America, with no decks on them.

Are builder upgrades worthwhile?   I suppose that would depend on the upgrade involved.   Bear in mind that a lot of things like carpeting and even kitchens, end up being replaced, over time.   It may be cheaper to go with the base carpeting and then wear it out over ten years, rather than "upgrade" to fancier carpeting from the get-go.   This is particularly true if you are financially stressed in buying the home in the first place.

And bear in mind that once the townhomes (or houses) are built, the value of each home is going to be roughly the same, as neighborhood (location) and home size determine price more than fixture and amenities.  If you live in the home for 10-15 years, chances are, the new owner is going to rip out the kitchens and baths, anyway.

I guess it also illustrates how buying a home that already has the things you want can be a far better deal.   While a deck adds some value to a home, the value added is generally less than the cost of construction of the deck.   So it may make more sense to buy a home that some homeowner already plowed money into, rather than buy new.  In some cases, it is better to move than remodel, as remodeling returns only pennies on the dollar, in terms of increased home value for money spent.