Lessons From the Dust Bowl 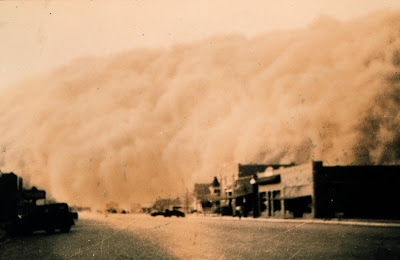 Was the dust bowl caused by nature, or man?
And who is to blame for the economic hardship that ensued - the banks or the people?

I recently watched Ken Burns' documentary "The Dust Bowl" which was interesting on a number of levels - but probably not as Mr. Burns intended.   Since it was a PBS documentary, it had a liberal slant - that people were "victims" of external forces beyond their control, mostly greed and capitalists (the usual suspects) and that everyone was wiped out by the disaster.

But if you watched the whole documentary, a different picture emerges.

Yes, greed was a problem, but not on the part of banks, lenders, or major corporations.  In The Grapes of Wrath, the Joads are shown being tossed off their homestead by heartless bankers, who can't wait to get their hands on all that dusty non-productive land.  And while it is true that banks foreclosed on a lot of small farmers like that, it is not because they were "greedy" but because they needed to be paid back the money they lent on the land.   If they didn't foreclose, the banks would go bankrupt.  And many did, too.

And in this regard, the stories of the survivors of the dust bowl are interesting.  Early settlers moved to these areas and settled down and grew wheat.  During World War I, demand for wheat skyrocketed and they made a lot of money.  Since they had little or no debt, they did well, and became prosperous.

Others, seeing money to be made, bought land in the area and planted wheat.  They called these folks "suitcase farmers" - who came out on the train with little more than a suitcase and some vague ideas on making money.  They leveraged themselves with loans and debt and planted wheat and made money - for a while.

But the weather in that area was cyclical - just as business can be cyclical, with ups and downs.  The older generation farmers, with little or no debt, were able to survive weather cycles.  The thinly financed suitcase farmers abandoned their properties during the early years of the drought.

This was brought home by two comments made in the documentary.  One survivor, whose family had been farming the area for generations, noted that after the sixth year of the drought, they were finally running out of the grain they had harvested in prior years.  These farmers, with little or no debt, were able to bank and store feed, as well as money, and survive the drought to farm again, when the rains returned in late 1930's.  As as World War II came about, they once again made money - enough to survive the post-war drought.

The second comment was even more telling.  Although people referred to the displaced farmers as "Oakies", most of those farmers were actually from Arkansas, and were relatively new to the business.  In other words, these were small farmers who were leveraged in debt, and could not survive several years of drought.  The established farmers, on the other hand, were able to survive.

For the most part, the older family farmers in Oklahoma survived the dust bowl, and many of their descendents are still farming there today.

So what do I take away from all of this?  Well, not the "We're all victims of greed and banks" message that the people at PBS want you to think.   Rather, I take away other messages, that are very relevant today:

1.  When an area of business seems lucrative (farming wheat, dot-com startups, mini-mansions in cornfields) people jump into it late, often leveraging themselves with debt, hoping to make "easy money" in a field where growth is already starting to taper off.  People do this to themselves, not banks or "evil corporations".

2.  Being leveraged in debt - whether as a business or individual - means that you cannot survive economic downturns, whether it is a six-year drought, a layoff from your job, or a downturn in the economy.  The companies and people who have healthy balance sheets survive in the long-term.

3.  Much of the folklore we hear from the media is mostly wrong.   Grapes of Wrath was an excellent book, and well illustrated the plight of migrant farmers during the depression.   However, its simplistic "Workers good, Capitalism bad" outlook was a more than a bit of propaganda.  The reality of the dust bowl was more complicated that a black-and-white image of greedy bankers evicting noble dirt farmers.

And with regard to the last point, we hear much the same story today.  The media loves to report stories about "people losing their homes" - as if by some magic, the bank holding the mortgage should just "excuse" the debt and allow people to live in a home they could never afford.   It is a story that sells to the plebes - the debt slaves out there who buy into the idea that they are put-upon and disadvantaged in this world.   Their own actions or inactions are never called into question.

Most people in the US today are still highly leveraged with debt.  Our recession has been officially over for several years now - even though people still refer to it as a "down economy".   But with interest rates falling and money becoming more freely available, guess what folks are doing?

Yup.  Leveraging themselves into more debt.

And after losing their shirts trying to "buy and flip" Real Estate in 2008, what are people doing today?

Yup.  Looking for the "next big thing" in the stock market, and bidding up junk stocks.