The Beatification of Nelson Mandela 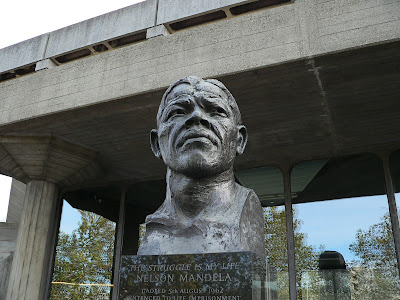 Nelson Mandela died the other day.  The media and politicians are falling all over themselves to declare him a saint.   But was he really?   And what did he accomplish?

As I noted in an earlier posting, it is all too easy to get caught up in other people's causes, without understanding them thoroughly.     And for the most part, being a "Cause-ista" is never a very profitable use of your own personal time and energy.

And the problem is, since you don't have the time and energy to thoroughly investigate causes, charities, and other "issues" it is entirely possible you will be mislead and misdirected.   You may end up supporting scoundrels or giving money to con-men.

For example, in America, many young people like to follow the Dali Lama - imbuing him with this saintliness that is undeserved.  The reality of the Dali Lama is that he and his brother were both on the CIA payroll. He is fabulously wealthy, with homes all over the globe. He is homophobic and NOT a vegetarian, by the way. And if put in charge of Tibet, he would rule it like the Taliban. The Dali Lamas were the Shahs of Tibet, not saintly monks.

But that doesn't sell bumper stickers.

Mother Teresa - surely SHE is 100% pure as the driven snow, right?  Well, some criticize her. While she has done a lot to help the poor and people dying on the streets in India, her work doesn't extend to PREVENTION of the underlying causes of this poverty and death. Things like birth control and social justice are not on her radar screen. So, if you are dying in the streets, she will make you a nice bed, but won't do much to prevent your 10 children from suffering a similar fate.   And the people she associated with and obtained money from were, well, not always the nicest folks.


Nelson Mandela is in a similar vein. There is a lot of gooey happy-talk going on in the States right now. But in the back of my mind, I keep thinking, "Gee, wasn't he imprisoned for KILLING people?"  And indeed, he was deemed a terrorist (and the ANC a terrorist organization) until fairly recently.

As the author of this interesting article points out, once in power, Mandela and the ANC did not really do much different than their white supremacist predecessors. South Africa is still a count6ry troubled with poverty and violence.

South Africa really hasn't changed much since the days of apartheid.   The black ghettos are still black ghettos, and people are assaulted and raped regularly.   There is still a high disparity between the haves and have-nots.   The ruling class has merely changed color.  Crime is still rampant.   And race discrimination still exists - but with a new twist.   For many government jobs, whites need no longer apply.

I guess if Mandela has any chance at sainthood it is in that he changed later in life, and renounced violence. I guess that's something.

But I can't help but think that someone who lost a loved one to an ANC bombing must find today's love-fest somewhat disturbing.

Even more disturbing is how the historical record is being sanitized.   As with the Dali Lama and Mother Teresa, critique is not even allowed.  Once sainthood is established for a popular figure, any criticism is viewed as obscene.

On the Mandela Wikipedia page, the only mention of bombings are against "government targets" and power stations where no people are present:

"Operating through a cell structure, the MK agreed to acts of sabotage to exert maximum pressure on the government with minimum casualties, bombing military installations, power plants, telephone lines and transport links at night, when civilians were not present. Mandela himself stated that they chose sabotage not only because it was the least harmful action, but also "because it did not involve loss of life [and] it offered the best hope for reconciliation among the races afterward." He noted that "strict instructions were given to members of MK that we would countenance no loss of life", but should these tactics fail, MK would resort to "guerrilla warfare and terrorism"."

Problem is, the ANC did resort to terrorism, bombing a bank, a grocery store, and attempting to bomb a railway station - among other targets.   Innocent people - women and children - had their limbs blown off, or were blown into chunks of hamburger.  And Mandela approved and authorized these actions at the time.

Of course, maybe this is just the nature of revolutions.   After all, George Washington crossed the Delaware river on Christmas day, caught the Hessians by surprise, and basically slaughtered them.   Today, we celebrate this as an act of patriotism - because we won.   If it had gone the other way, well, we'd call George Washington a terrorist - along the lines of Guy Fawkes.

Winners write history, they say.   And maybe that is why we have beatified Nelson Mandela.
Newer Post Older Post Home