Permanance and the dot-com world 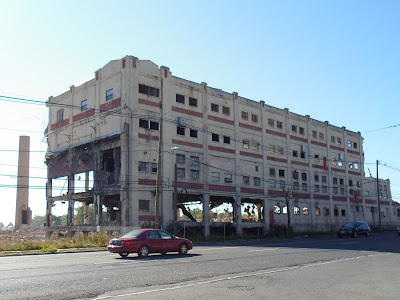 Things wear out, over time, including cars, homes, buildings, and factories.
We should not be surprised by this.

As I noted in an earlier post, when I was a kid, I thought things like cars were permanent, rather than the disposable consumer appliances that they really are.   I thought, as a kid, that if you could just "take care" of a car, it would last forever.  And while this is theoretically true, it really makes little or no economic sense, as eventually, the cost of maintaining a car far exceeds its value - and it becomes more expensive to own than a new one.   And this is why most people buy a newer car, over time, rather than try to keep an old jalopy alive.  There is an end game to everything.

Houses and buildings, as I noted before, also have a design life - and often it is better to tear down and start anew, rather than try to patch and repair a building, over and over again.   Moreover, as time progresses, the desired use of the land a building sits on may change over time.   A cornfield might be plowed under for tract homes in 1950, as that is a more profitable use of the land - at that time.  But by the year 2000, those tract homes may be run-down and the land now so valuable that it makes better sense to tear down the post-war crackerboxes and build anew.   And that is what happened to my home in Virginia, as land values soared with the population.

And the same is true of industries and factories.  Many in the labor movement decry the closing of American factories, and they will say idiotic things like, "Well, we've lost that investment in the factory when they closed it and sent all the production to China!"   But the reality is, even a factory - which may seem permanent - has a design life.  Over time, a factory may become obsolete, or the products it may make become obsolete.   Eventually, it is time to rip it all out and start over - or close the doors, or send the work elsewhere.

All across America, you see remains of old factories and industries, some dating back from the 1700's.   Old mills, forges, ironworks, or the like, were abandoned by our ancestors as newer technologies came about, making these small works unprofitable and useless.   Canals were abandoned in favor of railroads, and even railroads left abandoned when there was no need for them.   We move on, with time, as products become obsolete, or newer industries are more efficient.

In my own life, I have seen a number of factories bulldozed or closed.  My Dad's old clutch plant is no more.  The ball-bearing factory I used to work in, is now a warehouse.   The air conditioning company I used to work for has closed most of their buildings up North and moved production elsewhere (those buildings themselves were re-used WWII tank factories).   Times change, and in a very short time, these things are shut down, torn down, re-used, sold, or whatever.   It is rare for a factory to last more than a few decades.  The oldest are less than 100 years old.

What made me think about this was my previous posting about Facebook.   In researching this online, I started to see a pattern with a number of companies - Webshots, AOL, Bebo, MySpace, etc., where a new Internet start-up becomes wildly popular - and then becomes the darling of Wall Street (or is bought out by a big media company or private investors).   In a few short years, the company loses its touch, and its products become obsolete and customers leave.   The founders buy back the old company for pennies on the dollar, and instead of trying to run it as a profitable venture, just bulldoze it into the ground and try to "start over" with a new idea - often with mixed results.

This is such an identifiable pattern that they should have a name for it.  Call it Webshots Syndrome.

But it got me to thinking - if things as permanent as factories are bulldozed to the ground - after decades of productivity - what is the value of the underlying company?

Traditionally, in the "brick and mortar" world, someone would decide to start a company to make things - for example, kerosene lanterns.  In order to do this, they needed capital to start the business and build the factory.  So they incorporated and sold stock - to raise money -  and then built the factory, hired workers, and made the lanterns, which they sold for a profit.   And some of those profits were paid back to the shareholders in the form of dividends, and some was used to improve or expand the factory.

(Contrast this to the dot-com IPO, where they sell stock to cash out, not to raise money!)

And over time, if you bought the stock, you would make back your investment in terms of dividends.   But eventually, the factory would have to close - or the company find a new line of work.   Electric lights would replace kerosene lanterns, and if the company did not change with the times, it would have to fold up its business and close.   And at that point, the worn-out factory building and its fixtures (designed to make kerosene lanterns) would be worth very little - pennies on the dollar - in bankruptcy.

At that point, as a shareholder, your "investment" would be wiped out.   But presumably, you made enough money in dividends to more than compensate your loss in capital investment.  Or, hopefully, you sold out in time, perhaps seeing the writing on the wall about electric lamps, and then got some sucker to pay you good money for a stock that was going nowhere.

Of course, other companies morph themselves into new businesses.   For example, a large kerosene lantern manufacturer morphs into an automotive lighting supplier.   IBM goes from making computers to doing some kind of "enterprise software" thingy.   A maker of computer display chips becomes a maker of A/D converters.  AOL goes from an online portal into a content provider. The list goes on and on.  Companies re-invent themselves and often end up in totally different lines of work.  The successful ones, that is.

The interesting thing about this phenomenon is that there are two ways of looking at such transitions.   For example, if you are running an old kerosene lantern factory, and have a bunch of shareholders to satisfy, as well as a unionized workforce to placate  - and you see the writing on the wall with regard to the emergence of the electric lamp, you have two real choices.

A first approach would be to try to re-make your company into an electric lamp company, by revamping your antiquated factories with new machinery and tools.  However, this would require a lot of capital to do.  So you have to hope there is enough residual business in kerosene lanterns to support this change, or you'd have to borrow money or sell more stock to move forward with this modernization.

A second, and arguably more profitable approach, would be to let the kerosene company go bankrupt - or find some chump to "buy you out" - a chump who doesn't realize that the kerosene business is not going to be around much longer.   You then go out and form a new company and raise money for a whole new factory in a new city - preferably one without unions, and without your prior pension liabilities - and start anew.   It is a more profitable venture, as you are not saddled with the legacy of old shareholders to pay off, or old factories that are expensive to modernize (often costing more to modernize than to build anew) as well as past liabilities.  You wonder why more people don't do this.

But regardless of the company involved, eventually, all companies go bankrupt.   There was a statistic being batted around the other day about how of all the Fortune 500 companies in 1960, only a few are still around today.   People acted shocked about this, as if it were some weird anomaly.  But in 50 years, most businesses - even old-school brick-and-mortar businesses - go belly-up.  Companies are dynamic, not static.  They come and go like the weather - they are not cast in stone.

So, you have to wonder why someone would buy stock in a company that pays no dividends, has no intention of ever paying dividends, and is something as trendy and ethereal as an Internet dot-com start-up.  You can almost guarantee that eventually, down the road, the company will end up on the rocks, and the stock price will be a fraction of what it once was.   And not having been paid any dividends, you will be left with nothing.

That is, unless you can buy low and sell high - to some other chump.   But that is not investing, is it?  It's just gambling, right?

Anyway, that's what I was thinking when I saw an abandoned factory.
Newer Post Older Post Home