Video Ads - the Beginning of the End for Facebook? 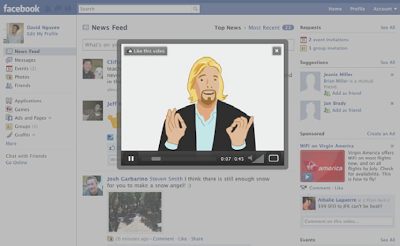 Facebook has announced that it will embed video ads in your "feed" (an interesting word for media kibble if there ever was one).   Is this the beginning of the end for Facebook?

There used to be a website call Webshots.  Long before Picasa and Facebook, you could upload photos to the site and have them hosted for free in "albums" with captions.   People could comment on your photos and even rate them:

By 2001 Webshots became a profitable company with a combination of revenue streams that included advertising, freemium service, and merchandising. By 2004, Webshots was grossing $15M/year, had more than 200,000 paid subscribers, and was the #1 photo sharing site and top 50 media property per ComScore.n the same year, Alexa ranked Webshots the second largest English language privately held Web media property (behind weather.com). The company was sold to CNET Networks for $71 million in cash.

In other words, for its time, it was a pretty big deal.  Yea, $71 Million seems pretty paltry compared to what today's websites are selling for.   But back then, it was a major player on the Internet.

Webshots is no more.   What happened to it?   Well, to begin with, offering free services on the Internet is tricky.   You can't make money on "free" unless it has some hidden charges.   Many sites start out as "Free" and then discover that they aren't making any money - or not making as much as they think they should be.

So they try different ways to "enhance revenues" and almost all of these end up screwing the pooch - killing off the underlying website.   Webshots offered a "premium" service for a nominal fee.  Not surprisingly, not many bit on that tidbit.  Who wants to hand over a credit card number and pay a few dollars a month for what was previously free?

Then they tried advertising.   Pop-ups, sidebars, banner ads - you name it.  Problem is - or was - back then, the only people who would pay for such ads were (and still are, for the most part) con artists.   Various dubious sites promising you bargains or to get you out of debt, would pay for advertising on Webshots - and Facebook, as well.

These ads didn't generate a lot of revenue, as not many clicked on the odious deals offered.   And of course, associating yourself with con-men and rip-off artists is no way to enhance the reputation of your site.

They then tried selling t-shirts and mugs with your pictures on them.   A lot of sites, like Zazzle, do this, and I even ordered a few (from Webshots and Zazzle) with mixed results.  If you are running a photo hosting site, selling the photos seems like a natural.   But today, few folks pay for paper photos anymore (everything is on the ubiquitous smart phone) and the coffee-mug and t-shirt printing places are pretty competitively priced.

They tried reformatting all your photos to a proprietary format - and then making you pay to download your own photos.  That seemed to backfire, as they went back to standard JPEGS in short order.

Finally, they put in video ads in the sidebar.   And it was obnoxious.

To begin with, it meant the pages became very slow to load - and every time you clicked on "next picture" the video ad (or a new one) would start again, at full volume.   You learned quickly to "mute" your speakers on your computer, lest you be blasted with a full-volume ad for God-knows-what.  The ads were annoying and obnoxious and turned people away from the products being advertised, which in most cases, were more rip-offs and junk like Quibids or something like that.

(At the same time, of course, other photo sharing sites were popping up, such as Picasa, and of course, Facebook.  Facebook, today, is the largest photo-sharing site on the Internet, with something like 140 Billion photos hosted on the site.   Competition from other sites offering additional services was the other key to the puzzle.  Uploading photos on Facebook used to be a PITA, too!)

So what happened next?   Webshots went dark, basically.   They sold the company to "the original founders" who apparently HATED all their users.  They renamed the site "Smile" and then erased everyone's photo albums, including captions and comments, and then put all the pictures into a big dumpster with your name on it.

At that point, I deleted my photos and closed my account and learned a valuable lesson:  NEVER, EVER, EVER trust your content to an online site, if you wish to keep it.  Everything online can be erased, at a moment's notice, and there isn't much you can do about it.

Since then, the Webshots domain name was apparently sold again to a site selling professional screen savers.

Smile is trying to capture the smart phone photo-bugs, who want to snap a picture and instantly upload it, social-media style.   However, like Webshots, without the social media component, it is unclear how they can accomplish this.   And it does not appear they are.   And of course, pissing off your existing user base is no way to get started, is it?

This site alleges that the new owners of "Smile" are now "reactivating" the $2.99 per month accounts that people had on Webshots - and charging the credit cards on file for this "service".   However, they are not reactivating their photos or albums or all the other data that was DELETED when Smile took over Webshots.   Needless to say, this is pissing a lot more people off (Moral:  NEVER sign up for a website that requires a monthly fee!).

In a way, this is proof that Smile has already failed.  When companies resort to charging people's credit cards indefinately, it is a sign the company is going down the tubes.   AOL did this toward the end, and according to one New Yorker article, a significant portion of their income today comes from people who don't realize they don't need AOL to access the internet - people who still pay the monthly fee, without question.

The Webshots saga is an interesting one and illustrates how a once-dominant pioneering website (Webshots was launched in the 1990's) can wither and die on the vine - and be utterly destroyed by the people who run it.   Over its tortured history, Webshots was bought and sold and re-sold, often by the same people.  It is not clear whether it ever made any significant amount of money for anyone.

But what is most interesting is how the owners of Webshots really destroyed their own business, by trying to commercialize on its users too much, and finally alienating everyone by dumping all their photo albums into a wastebasket.  If you go online, there are discussion groups galore from people who despise what the "Smile" people did to Webshots.  And ironically, many of these discussion groups are on Facebook.

Facebook, it could be argued, killed Webshots.   But it could also be argued that Webshots killed Webshots.  I can tell you from a personal perspective that once Webshots went to obnoxious video advertising, I stopped uploading photos there, and started using Facebook and PicasaWeb to host photos.  Why?  Because it became embarrassing to send someone a link to my Webshots photos - when noxious video ads would pop up.  I even tried migrating some photos from Webshots to Facebook and Picasa.  But of course, site owners make that difficult to do.  Again, lesson learned - never assume anything you put on the internet is permanent (unless it is embarrassing, of course).

I went to Webshots less and less, and when I received notice that "Smile" was taking over Webshots, my only regret was losing all my old photos and captions and albums.   I had already stopped using Webshots when it became obnoxious.   And its noxiousness was the only reason I migrated to other sites.

The Webshots tale is a cautionary one for anyone trying to make money on the Internet.   The site was no doubt heavily over-valued during the various dot-com frenzies we have had - going for $70 Million one day, to $2 Million the next.    Pay too much for a site and if it fails to make the money you were hoping to make (as I am sure American Greetings thought they would) you will be more than pissed off.

And trying to commercialize such sites is not an easy endeavor.  If you over-do it, you drive away you core base of customers, and suddenly your are advertising to no one, much as MySpace is (or was).

Video ads are a tricky thing, as they turn the Internet into television.   And the younger people of today have turned to the Internet and away from television, mostly because television (like radio) has made itself so noxious, boring, repetitive, and distasteful, that it is actually painful to watch.

The Facebook video ads are launching without sound, which will be muted until a user clicks on the ad.   I guess that is something.   But the distraction of seeing moving images in your feed will  be like the dancing mortgage guy on the sidebar ads in days of old - distracting and obnoxious.

And it remains to be seen if adblockplus or other ad-blocking software will be able to block these video ads - thus negating any financial advantage Facebook hopes to get out of it.

If you annoy your users enough, they will start to drift away.   I think this is a basic rule of the Internet.