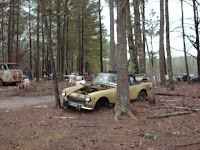 Some folks like to accumulate old car projects, convinced they have some inherent value, even though they have no time to work on them.


The ad on Craigslist is telling: "For sale, Ford Rat-Rod project car. Many parts, must sell, too many projects!"

It is a story I've seen or heard of time and time again.  People, usually men aged 20-50, who collect "project cars" in their yards.  Well, they call them "project cars" - the neighbors call it a junkyard.

I've mentioned before in my blog about the fellow who had 30 BMWs in his yard, convinced they were all priceless collectibles, but not having the resources to restore even one of them.   He was convinced that "someday" he'd restore them all, or that a "collector" would buy them from him.   And by keeping them, he was "Mr. BMW" even though he attended the BMW car meets in his wife's battered Subaru.

The characteristics are the same: The hoarder collects "project" cars - often not running, with no real plan on how to restore or maintain them, or even to store them.  The hoarder does not care for the vehicle - often leaving it out in the weather, under a tarp, or on the grass (which corrodes the metal).  The hoarder may partially disassemble the vehicle and then scatter the pieces to the four winds, such that the car can never be reassembled again (or the person buying the "project" ends up missing several major components).

A car hoarder does none of these things.

The problem with project cars is that even just ONE project car has enough work in it to last several years.   If you want to completely rebuild an old Jeep, a Model A, or a MGB, that's great.   But to try to do all three (or more) at once is nearly impossible, unless you have won the lottery and have lots of time on your hands.

The project car hoarder keeps accumulating more projects, even though his existing projects never get finished.  "Gee," he says, "that Ford Vicky sure looks interesting!" But of course, it is little more than a frame and some body panels.  The amount of money and labor to complete such a project would be staggering - and certainly beyond the capabilities of the average working Joe.

For many people, the idea of "owning things" equates to wealth. The poor person living in the trailer considers themselves to be "wealthy" because of the quantity of cars parked on their lawn - regardless of whether they are running or not. And not surprisingly, the poor person thinks these things are "valuable" - far too valuable to sell for their scrap value (which is their actual value).

Again, poverty is defined by making poor economic choices and also by not having realistic ideas about economic values. So the person in the trailer spends far too much money trying to fix up a 1985 Camaro, convinced it is a "rare collectible" and not just a mountain of rust and poor engineering.

But car hoarding disorder goes far beyond mere poor decision making. For the hoarder, accumulating project cars becomes the obsession in itself, and the idea of repairing or fixing up the car is far less than secondary.

How do you avoid car hoarding disorder, or stop it when it manifests itself in your spouse? I think like anything else, mental hygiene requires constant vigilance, and by that, I mean you have to examine your own inner motives from a rational standpoint from time to time, and understand what it is you are doing - and to admit that maybe you are wrong about some things.

It takes courage to say, "You know, realistically, on my income level, there is no way in Hell in my lifetime that I will ever be able to afford to fix up more than one of the cars parked in my side yard, and even then, fixing up one of them is a ruinous financial proposition." And then you pick up the phone and dial the scrap dealer, or sell it all on Craigslist for what you can get for it.

I haven't succumbed to project car hoarding disorder, but I can see its fatal allure when I surf on Craigslist. "Gee," I say to myself, "that project car looks interesting!" But I realize quickly the staggering amount of money and work needed to restore even one old car. And as I realized long ago, if you really want to own an old car, the best way to go about it is to just buy one from some other chump who spend his life savings restoring it. Because chances are, you can buy it for 50 cents on the dollar.

And by the way, that is a good rule of thumb - "half what you got into it". Whenever you see someone who spent a pile of dough fixing up an old car, chances are, what it is worth is half what they spent on it - and no more.

But for the project car hoarder, that point is moot. Their "project cars" will never come to anything, other than a decaying eyesore in their side yard.

And like any other form of hoarding disorder (and in most cases, hoarders have more than one variety, or the spouse also has a variety of it) the results are often tragic - people end up living in their own squalor and squander staggering amounts of money acquiring and storing junk on their properties.