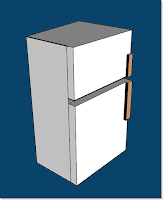 In America, even middle class people own more than one refrigerator, sometimes several. It is pretty amazing, actually. I own three of this model shown above.
I sold a refrigerator the other day. No need to worry about my food going bad, I have eleven more. I realized when I counted them that I really own too much "stuff" and that it is cluttering up my life.

Eleven refrigerators. Is this even possible? How does it happen?

Why is it possible to own so much in America? We are a very wealthy nation - make no doubt about that - and our standard of living exceeds that of nearly every other nation in the world. Don't give me any guff about "Well, in Sweden, they have a higher standard of living" - because Sweden also has a tax rate close to 70%, a limited population, and xenophobic immigration policies.

No, the good old US of A has done the best job of providing the best standard of living for the largest single population in the world. Even people living on welfare here are better off than folks in more than half the world. And yes, your typical person living on welfare in the USA has at least one refrigerator.

Some of the refrigerators we have were actually given to us or were found literally by the side of the road. Functioning appliances, literally given or thrown away. Only in America.

That totals twelve refrigerators, including ice makers. How the heck did this happen? Again, since many of these appliances were free, it is easy to accumulate them. Why not? Free is a good price.

Of course, you end up paying hundreds of dollars over the years for the cost of electricity to run these machines, so they aren't really "free" at all.

Many folks keep an older fridge in the garage for "beverages" - Dad's beer and maybe soda pop for the kids. Or Mom freezes things in there or they have a freezer to "save money on food" by buying in bulk.

Many of these older refrigerators are energy hogs, usually taken from the primary kitchen when the kitchen is remodeled.

But while it is convenient to have such bulk storage, it is costly in terms of energy consumption and also space consumption. I think as part of our downsizing, we need to bring our fridge count down to two or three.

Now, you may get the idea that I am wealthy from this, but I live a very middle-class lifestyle, like most folks do. It is all too easy to get caught up in owning "things" when they are free or very cheap.

Microwaves? Um, let's see, one in the house, one in the barn, the boat, the camper, the other house, and the condo. That's six. You can buy these for as little as $29 these days, sometimes less.

The cost of these appliances is so low that they are almost free. We bought one for the cabana at Wegman's for about $25, which is pretty amazing to me. Heck, at that price, why not have one in every room in the house?

But of course, we did not "need" it for our lake cabana (there is already one in the boat, thank you) and we've used it maybe once or twice. And selling it? Well, if a new one is $29, what can you get for a used one, even in perfect condition - maybe $10? If that?

That is the joy and pain of our consumerist society. We literally are drowning in a sea of used appliances. Old computer monitors? Tube televisions? Nearly every American has one laying around these days, with no one to buy them and no safe way to dispose of them.

How amazing, when you think about it. Drowning in a sea of luxury goods. It is like a scene from that animated movie "Wall-E".

I am not anti-consumerist or anti-materialist. But buying and owning things is indeed a form of slavery. Once you own a lot of things, they tend to own you.

The upside of our consumerist economy is that since consumer goods are so cheap in this country, you can live a very comfortable lifestyle, with little work, if you choose to live more simply.