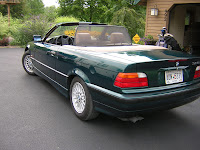 Pretty to look at, a used BMW is only as good as its service record. A car that is well-maintained looks the same as one that needs thousands of dollars of repairs.
As I noted in my BMW FRIGHT PIG article, many a young person gets reeled in by the prospect of owning a shiny used BMW, only to find that the purchase price buys you little more than the repair rights to the car.

In today's mail, I received a nice note from a young fellow who bought a used BMW. He very thoroughly analyzed and totaled up how much he spend on repairs for the car - which were over double the purchase price:

This car was unfortunately my learning curve. I purchased it off Craigslist for $2300 with 170,000 miles. Very clean interior and exterior was decent. But the car ran rough. Seller said it needed an O2 sensor. I drove it three hours home and had it inspected. I was told the car needed $5,000 parts and labor. So we took it in steps and had repairs completed through time. I found a less expensive independant mechanic that helped decrease labor cost drastically and I found contacts that provided used parts at a great price! I know what you're going to say...I should have had a cut-off point on my spending but it seemed a perfect running car was just one more repair away.

Here's a list of what I replaced or had done on the car:

Many of the items listed in his very detailed analysis are "typical" old BMW repair items,. such a radiator replacement and oxygen sensors. Some are "upgrades" (Bilstein shocks, lowering springs, smoked fog lights) that I would have questioned the value of, on a car near the end of its design life.

But in the early 1980's, some Japanese cars started going routinely over 100,000 miles and expectations by consumers, aided by increased average driving (from 7,500 miles a year in 1960 to 15,000 miles a year today) has meant that more miles are racked up on cars in a shorter amount of time.

But even so, a car with nearly 200,000 miles on the clock is close to the end. Sure, some cars go more than that - but that is a factor of luck, maintenance, driving habits, and the willingness to throw money at a car. Eventually, in any mechanical system, the cost of repairing a system exceeds the replacement cost. In Engineering, we call this the Bathtub Curve or Weibull Curve.

And many cars can "limp along" with a number of expensive repair issues, for many miles, until there are a host of broken parts on the car, which collectively will require thousands of dollars to fix.

For example, a car can run with bad oxygen sensors. The computer goes into "failsafe mode" and runs the engine - usually too rich (to prevent detonation). The car will operate, but will not pass inspection and of course, the check engine light will be on all the time. And if it runs rich long enough, it likely will clog the catalytic converter.

Worn shocks, struts, and other suspension components can be expensive to replace. But you can drive a car with these worn components for many miles, and then sell the worn-out car to someone else.

And of course, broken interior pieces and other minor nuisances, by themselves, are not enough to warrant junking the car.

But when you take this all together, throw in a set of worn brakes and tires, you end up with a car needing a lot of work. And to the unsuspecting used car buyer, such purchases can end up being a nightmare.

And for the young man buying the car above, that is exactly what happened - all of the delayed and put-off repairs came home to roost on his watch.

For my young friend above, the price he paid for the car, as a "fixer upper" might not have been too bad - if he had a garage and could do much of the work himself. Even then, better examples of such a car can be had for less than what he spend on the purchase price and parts.

And that is the rub - when a car reaches this point in its design life, it is worth very little, other than to shade-tree mechanics who know how to fix them. You are better off leaving such cars alone and buying something a little newer, if you need a reliable car for daily transportation.

Fish Further Upstream - For the over $7000 spent, he could have bought my low-mileage cabriolet (pictured above) which just sold on eBay for $6500. It is perfect? Not exactly. But it has far lower miles on it, and most of the $5000 in repairs listed above already performed on it - along with a host of others.

For a busy young person, however, I would suggest that $7000 would buy one helluva use Corolla or Camry - and provide many more miles of worry-free transportation. If you are in college or working long hours at that first job, that might be a better alternative.
Newer Post Older Post Home