AARP might have once been a good advocate for older Americans, but lately, it has become little more that a marketing group.
I turned 50 this year, so of course, I joined AARP. They've been courting me for a decade now, sending me offers to join since I was 40. And that is a first clue - AARP wants members and they really don't care if you are 50 or older or retired - they don't check. So long as you pay, you can join.

Is it worthwhile to join? The supposed "discounts" offered are one incentive. Many hotels and other places will give a 10% discount for AARP members. But of course, those same places often offer a 10% discount for AAA members as well - and AAA offers free maps and towing!  And frankly, many places will offer these discounts even if you aren't a member - just by asking for a discount, or by claiming to have an AAA card. Nine times out of ten, they don't check. Just act cheap at check-in and ask the hotel manager if "that's the best he can do" on the room rate. You'd be surprised how many times they will lower the rate right away.

Other discounts are sort of illusory. Like the ABA, they offer rental car discounts and other come-ons that really aren't "savings" in that you are getting a discount only on a highly marked-up service. You can go online and get better prices.

What AARP does do is market to you. You'll get lots of mail from them, including their magazine and newsletter, the latter looking a lot like Parade magazine, and the former like a cross between People and Reader's Digest. A recent cover proclaims, "We catch up with Valleri Bertonelli!" What that has to do with retirement is anyone's guess. This month, it's Dennis Quaid. They seem to have gone the way of celebrity worshiping supermarket tabloids.

What does that tell you about their average reader? Idiots, yes.

And the ads in the back are similar to those in other idiot-exploiting magazines, like Smithsonian, which I was given a gift subscription to (and how they got my name in the first place). You know the stuff - jitterbug phones, Gov't gold coins (whose "Gov't" they don't say, of course). Overpriced junk being hawked to senile seniors. And this is the organization that is supposed to be watching your back. Some help they are.

Another "travel" section discusses how to redeem frequent flyer miles. The article at least points out that these are nearly impossible to redeem anymore, and thus have become a joke. Maybe a better point would have been made that instead of trying to game this rigged system of flyer miles, a better approach is to shop the airline or credit card with the lowest price and just say "fuck the miles". You can get $99 flights these days - why be "loyal" to one airline? And why get a credit card with 25% interest just to get a few thousand "miles" that can never be redeemed for anything?

Worse yet are the come-ons directly from AARP - for long term care insurance, burial insurance, life insurance, car insurance, etc., most of which are not really very good bargains if not outright rip-offs. They clog my mailbox weekly.  Join AARP and get junk mail!  I put it in the "recycle" slot at the Post Office without opening any of it.

So the discounts are pretty sucky. If you have a pulse, you can get better discounts than with your AARP card. The magazines and such are just warmed-over versions of Reader's Digest and Parade - advice for idiots, by idiots. No real insights into retirement, there. And you are marketed to, in the magazines and by selling your name and address, for all sorts of junky stuff that is overpriced.

AARP is supposed to be watching your back. Instead they are selling your ass to commercial interests and offering you very little in return.

They do lobby for some Senior issues, but many people are not happy with some of the positions they take on these issues. Like any other organization (such as the ABA) you have to wonder whether it is wise to hand over your money to an organization that is lobbying for things you are opposed to. A 10% discount on a bad hotel room is not worth supporting politics that you might be personally against.

Unfortunately, the nature of most of these "affinity groups" runs the same way. They even have a name for it - "affinity marketing" - people who voluntarily sign up for a group and are then marketed to. There is often a gray area between the group and the companies that benefit from marketing to these groups.  And many of these Organizations, while they may start out with the interests of the group at heart, take on a life of their own - often with an agenda at odds with the membership.

For example, the Good Sam Club (the largest RV organization) publishes their own magazine. But they are also affiliated with the publications Trailer Life and Motorhome. The distinction between the organization and commercial interests is somewhat blurred, in many instances. This is not to say there is anything wrong with this, or that they are doing anything bad, only that a potential for conflict of interest exists.

At least with Good Sam, you get decent magazines. But AARP? If I wanted to read check-out counter celebrity gossip dreck, I'd pick up the latest People magazine and National Enquirer, the next time I am at Wal-Mart.  Granted, Valleri Bertonelli does look hot.  But what does that have to do with retirement?

I don't feel like AARP is really looking out for my best interests. Rather, they are just looking to make a buck off of me and to market to me. The "deals" they have offered are no bargains, and the advice in their magazines (in the parts which are not celebrity gossip) is really bad advice, particularly for seniors.

Retirement age is the age by which you should have stopped over-consuming. Living on a fixed income means spending less, not more. Marketing to seniors is thus really an oxymoron. But then again, some seniors do "spend it all" in a real hurry and end up broke and retired.

That is the sort of thing AARP should be working against, not promoting.

See also, this article:  Is AARP Irrelevant?    The storied history of this organization is, well, somewhat unseemly.

AARP, in addition to sending me tons of junk mail for insurance offers, sends me a lot of SPAM.  In addition to the normal crapola, this totally offensive e-mail came today:


Dear Robert,
Every morning, our Press Office provides me with copies of articles from around the country related to issues we're all following.
It's always a big stack to wade through but imagine my surprise to see your name in my list of "must reads" today!
If you haven't seen your article yet, I found this link to the JEKYLL ISLAND News article for you.
Check it out! And if you're anything like me, I'm sure you'll forward it on to everyone you know!
Best,
Barry Jackson
Senior Manager, Grassroots

The link goes to a "site" that is a faked up "Jekyll Island News" that purports to show my front lawn with a "Save Social Security" lawn sign and also "quotes" me as saying all sorts of crap I never said.  Worse yet, the link is an animation that then shows a cursor going to a search box, typing in my name and then finding dozens of articles with me saying the same crap.

It is all faked up, of course, but it is offensive in the worst way - and borderline libel, if not outright libel.  Putting words in people's mouths is outrageous.  I cannot fathom what idiot thought up this "grassroots campaign".

This is just sick.  I unsubscribed from all AARP e-mails (if only I could unsubscribe from the junk mail as well!) and will let my membership expire in due course.  I have not used the touted "AARP discount" even once - the AAA discount is better!

AARP is worse that worthless!  I am sure they are all making nice salaries there, though! 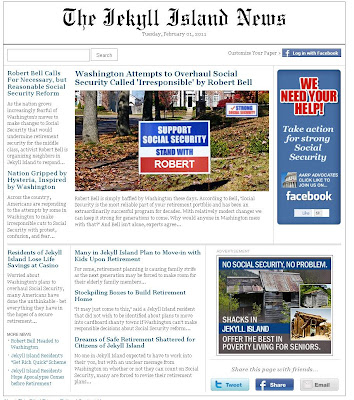 This fake newspaper created by AARP purports to have quotes from me.  I never said any of these things, and resent the idea of being told what my opinions are, before I can even formulate them!
Newer Post Older Post Home