Building Your Own Computer - Fixing Cars 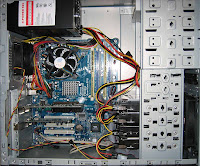 During the early days of the PC, assembling your own computer was easy to do and saved money. Today, these are disposable and inexpensive consumer items. Are cars going the same way?
I started playing with computers when I was 13 years old, back in 1973. Back then, we programmed FORTRAN and BASIC on time-shared mainframes, or with punchcards. As I grew up, the computer industry grew up as well. And by the time I was and adult, things that seemed like science fiction in 1973 were a reality.

During the early days of the PC, it was typical to buy a computer as a series of components and then assemble them, install an operating system, format the drive and start working. We'd peruse catalogs and magazines for the latest and greatest in processors, memory, hard drives, display cards, and the like, and then design a system to our liking and build it. Or we'd look for used components on the cheap and build a system on a budget.

Sometime in the mid-1990's this model became obsolete. Sure, today some hobbyists like to build computers - but they are doing so as a hobby, not to save money. When you can buy a complete machine, assembled, for less than $500, it makes no sense to build your own. And I realized this around 1995, when you could buy complete DELL systems, with monitor, for about $500 apiece, or less than 1/3 the cost of the last computer that I built myself.

Since then, I have not built a computer, but rather just bought them. Granted the skills I learned from building computers has helped me in maintaining them and repairing them (e.g., replacing a broken display card). But for the most part, I don't open the cases anymore except to vacuum out the dust. It just isn't cost-effective to build your own computer.

Cars are rapidly going the same way. Until recently, it was cost-effective to repair an older car and keep it running. However, increasingly, cars are becoming the type of inexpensive consumer good that, once it reaches a certain design life expectancy, it is time to throw it away and start over. The labor cost of repairing an older car, once it is totally worn out, far exceeds that of buying a newer one.

Many cars today, particularly Japanese ones, are designed to give a good service life of 150,000 to 200,000 miles, for about 10-15 years, and then fall apart all at once. At that stage of the car's life, it may need a number of major repairs, and many minor things may be broken as well. Since the book value on the car is almost nothing, it makes no sense to put more money into it.

As with any consumer product, there is an "end game" and a time to call it quits. Trying to rebuild a car from scratch, like trying to build your own computer, makes no sense at all.

Now when a car gets to be a certain age, generally over 20 years old, people may attempt to "restore" them in one form or another. Interesting cars, performance cars, or other unique rides, are often fun to restore and drive around - as a hobby, of course. As practical transportation, such cars often are unworkable, as they struggle to even run on today's fuels. An old car may seem like fun, until you realize it has no air conditioning, power steering, remote keyless entry, airbags, or even three-point shoulder harnesses.

And of course, such "collector cars" are worth less if you drive them any appreciable distance. Just parades and car shows - that's it.

I recently sold two BMWs in my collection. They are nice cars and the people who buy them should get some good service out of them. However, due to their age (13 years) they are not worth very much - maybe $6,000 or so - which is a far cry from their $40,000 price tags when new.

As I have noted time and time again, the best bargain in a car is to buy one that is 1-3 years old and still under warranty. They can cost 1/2 to 2/3 of the price new, and depreciate little for 5 years or more. Once they go beyond a certain point, however, some repairs may be needed, and the value drops off dramatically.

This probably was not a good bargain for me, as I hardly drove them in the interim, and certainly could make do with less car in my life.

And that brings up another conundrum with regard to cars. They are like fresh fruit and need to be eaten. You can't "save" a car by not driving it just as you can't "save" a bunch of bananas by not eating them. A car ages whether it is driven or not. When you hear about people putting 300,000 miles on a car, usually it is done within 10 years or so. These are folks who drive a lot, not keep their cars a long time. Lots of highway driving does not put a lot more wear on a car than driving it short distances to the store.

As a result, "low mileage" is not really big deal with regard to an older car. You may still have just as many wear and aging issues as a higher mileage car. The lower mileage car may just look better.

And it also means for you as a user, that not driving a car doesn't do much in terms of preserving value. You are better off buying one car and driving it a lot than to own two cars and drive them less.

Historically, I have enjoyed owning a number of cars - usually having at least 2-5 in my collection at any given time. But it is an expensive hobby, and a time-consuming one, as you need to do a lot of work to keep such cars in top shape.

Moving forward, we are going to downsize to two cars, or even perhaps one. Our driving needs have dropped from a combined 30,000 miles a year (typical of most Americans) to less than 15,000 miles a year. From a cost-effectiveness standpoint, owning one car makes sense.

And, just as I have given up on building computers, I will probably give up on rebuilding cars. I may do an oil change now and then, and perhaps a brake job, but beyond minor repairs, I think trying to "rebuild" a worn-out car is not cost-effective.