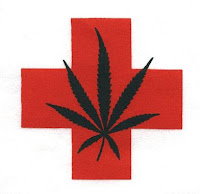 Medical Marijuana has become a back door for legalization of Marijuana. This is not the end of the world, of course. But for many, Marijuana can be a trap.

Proponents of Medical Marijuana claim that it should be legalized for medicinal reasons - to help patients suffering from chronic conditions. I am not so sure this is little more than a ruse for back-door legalization. You can get a prescription from some doctors for medical marijuana if you claim to suffer from pain or anxiety or a whole host of other hard-to-verify ailments.

If you are still not convinced, consider this description of the "medical marijuana" from the Facebook page of one legal distributor of the product:

Um, well, they certainly have colorful names for their prescription medications. Perhaps Pfizer can take a page from their playbook.  If this was truly "medicinal" would it be named to imply the altered state it induces?  I think not.

Is Marijuana bad for you? From my perspective, I have seen marijuana use destroy people's lives. Not in a horrific way like Heroin, Crack, or Methamphetamine, but in a more slow-motion crash and burn.

You typically see a pattern in long-term "chronic" marijuana users. They tend to lose jobs regularly, after "starting things" at work. And then they bore you with long-winded stories about what "assholes" their bosses were. And for some reason, marijuana users have the bad luck to always end up with a boss who is an asshole or work at a company that is "fucked up". Marijuana users always seem to end up with a landlord who is an asshole or a spouse that is a "total bitch".

These are pretty amazing coincidences when you think of it.

You don't think smoking pot has anything to do with it, do you? Naaah!

And in more than one occasion, you see the typical stoner moving back in with his parents, on numerous occasions, or perhaps never leaving. I have friends well into their 50's who live with their parents, and it is pretty sad.

Marijuana users tend to be continually "outraged" by "injustices" in the world and will bend your ears for hours about such injustices, both great an small, local and international. Like the right-wing political junkie, they will tell you their lives would be so much easier "if only" Bush were not in the White house, or there was justice in Tibet, or whatever.

The other pattern is the inability to sustain long-term relationships, which is partially due to the inability to sustain long-term employment and also the need to be continually outraged over things. The lack of employment causes financial stress in a relationship (the stoner usually sponges off his or her spouse) and the long-winded diatribes about injustice in the world or how their boss is an asshole, well, they get to be old, real fast.

And of course, the typical stoner eventually ends up getting into trouble with the law - and not just due to marijuana possession issues, either. Confrontation and difficulty with authority figures is a typical stoner characteristic, so they tend to "start things" that end up as legal matters.

And as a result, the typical stoner is a very, very unhappy and sad person - and sad person to be around. While they will tell you how marijuana makes them "feel better", what they fail to realize in the pattern of failed careers and failed relationships is that the drug itself is making them terribly, terribly unhappy.

While others move on with life, having careers, jobs, spouses, families, children, and the like, the stoner ends up with nothing in many cases. And they mock those who "conform" to society and outright denounce anyone with more than a nickel to their name. Success is an anathema to the stoner. And anyone successful is a "sell-out".

"So What?" you say, "Why does it matter that stoners are unhappy? They aren't hurting anyone!"

Well, I suppose that might be true to some extent. But tell that to the unhappy spouse who has had to divorce her stoner husband because she just can't live with him anymore and because he is a bad influence on the children. A stoner Dad is not a real joy to have when you are a kid.

And what about the parents in their 70's wanting to retire, only to discover that their kid wants to move back home - and has no savings, no career, no job, no nothing - after a half-century of living. Are they not also victims as well?

And what about the rest of us who are merely annoyed and inconvenienced by stoner neighbors and stoner co-workers who are forever "starting something" or failing to show up on time for work - if they show up at all. We all end up covering for them, and they cause us no end of anxiety and difficulty.

No, I am afraid that stonerism extends its reach beyond the immediate user - because in any society, we all interact, even the reclusive stoner in the basement lair of his parent's house.

And I know all this not just because I have a lot of stoner friends from school and watched them slowly self-destruct this way, but also because it almost happened to me as well. As I noted in my earlier post, my late Sister thought it would be a good idea to give pot to her 13-year-old little brother. It was not such a swell idea, in retrospect.

I found myself doing all the stupid stoner tricks outlined above - starting things, having difficulties at work and in long-term relationships, getting in trouble with landlords and other authority figures. Really, really stupid stuff.

I managed to pull out of it at about age 25, when I realized that pot was making me terribly, terribly unhappy and that there was no future in it. I saw older people who were chronic smokers for 10, 20 years or more and they were not the happy-go-lucky portrait of a hippie that the movement liked to portray. Rather, they were bitter old people, convinced that all the injustices in the world were stacking things against them.

"If only they would legalize it!" they cried.

OK, well, now marijuana is basically legal in a few States. People in California and Colorado can buy pot over the counter without a hassle.

This article on CNN discusses the problems medical marijuana dispensaries are having in Colorado.  As it turns out, the cost of producing pot is high (no pun intended) and when regulated like any similar "sin"  industry (such as liquor) the over head skyrockets.

Marijuana was profitable for illegal dealers mostly because they didn't have to pay for taxes, storefront space, wages, withholding, taxes, etc.  One wonders if all such illegal industries (prostitution, smuggling, bootlegging, fencing, thievery, loan sharking,extortion, etc) are really only profitable because they are tax-free and eliminate traditional overhead, not because they are inherently profitable.

In other words, any business can be wildly profitable if it is run under-the-table.  Selling pot isn't a money-maker in and of itself, but only because it is presently tax-free.
Newer Post Older Post Home