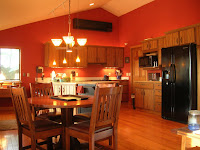 You can remodel a kitchen without spending a lot of money. This kitchen "makeover" cost only a couple thousand dollars.


We recently took a road trip, which meant staying in hotels (we didn't bring the camper) and one of the hotels had a television. Why people watch television is beyond me. Everything is an advertisement for consumption. But of course, we had to watch, right? It is like a drug.

On a "home show" (the sole reason we are in this Real Estate mess right now) they did a "kitchen makeover" for the Schwartzenbaum's. They had a nice enough kitchen, although the melamine cabinets were a little cheap-looking and the color scheme (black and white) was a bit dated.

First tidbit: When remodeling a kitchen, don't be tempted to do trendy schemes. What is popular this year will be out of style next year. Stick with something classic, as kitchen appliances can last 15-20 years with proper care and cabinets can last 30-50 if they are well made. Ripping out a functional kitchen because it is "outdated" makes no sense at all.

So the Schwartzenbaums were going to tear out a perfectly functional kitchen that would be useful for at least a decade more, mostly for style reasons. They were not changing the layout or functionality, just changing the cabinet styles and the colors of the walls, countertops, and flooring.

On the plus side, they decided to go to all-white appliances and keep the newer stove. That saved about $500 right there. White may not be trendy like stainless steel, but it also is an enduring color and won't be dated five years from now (like stainless is already starting to get). So kudos for them for saving the stove, anyway.

Tearing up the tile floor just to change color was a costly move, however, and added a lot to the cost of the makeover.

Hiring people to do all the work was also costly. Things like painting and basic electrical work are not expensive to do. However, if you are not handy, you do have to pay. And pay.

The finished kitchen looked good, and with solid wood cabinets and neutral appliances, should be serviceable for decades to come (unlike the cheap and trendy black/white melamine kitchen the previous owners installed). But it was not cheap!

However, the entire project got me to thinking as to why Americans are so obsessed about kitchen and bath remodeling. The home improvement TeeVee shows tell us these are desirable things, and after a while, people start to believe this. The Schwartzenbaums kitchen was perfectly functional, and with a coat of paint and new cabinet faces, could have been made to at least look better. Why the need for solid wood cabinets and granite countertops? Why tear out and start over?

Probably, in one word: Status.

People buy many products based on status - the need to impress people they don't know. And we all do it, so don't pretend for a minute you don't do this, too.

Status is why people buy a Lexus instead of a Toyota, even though the cars may be the same underneath, come off the same assembly line, have the same engines, drivetrain, same options and everything else, other than a few "luxury" features, a fancy name, and $10,000 added to the price. Why would anyone pay more for the same car? In one word - Status.

A fancy car says "I have money, I am important, and moreover, I am BETTER THAN YOU!"

But of course, everyone else has a fancy car, so it doesn't matter. Or people don't notice. Or if they do, they say, "Who is the jerk-ass in the Lexus?" So it all really means nothing, but we all still chase that golden dream of impressing people we don't even know.

And the same is true of kitchens. People hope that everyone will "Oooh" and "Aaaah" over their new fancy kitchen. And because I know my friends expect this, I do it. "Ooohhh! Is that GRANITE? How nice!" Heck, they just dropped $30,000 on it, they should get some payback from it (other than microwaving their restaurant take-homes).

And that is the rub, too. Many of the folks owning "gourmet" kitchens are hardly gourmands, or even have good taste. I've seen this first hand - people who spend a hundred grand on a kitchen and say things like "Outback Steak House is my favorite restaurant! I just love the bloomin' Onion!"

No, they really do that. It is pretty sad. They think a chain restaurant is "good food."

And on the other hand, I've seen people who are wonderful cooks, who spend their lives devoted to food, making great meals on little more than a hot plate and a toaster oven. They don't have bubkis, but when it comes to making good food, they kick-ass.

Sure, fancy gear is always nice. But a functional stove and a well-laid out kitchen beat the "all show and no go" kitchens that most designers seem to come up with.

Before you drop tens of thousands of dollars into a showplace kitchen, ask yourself what the real reasons why you are doing it. And don't say "to add to resale value" because, as I have noted before in this blog, a fancy kitchen won't add more than its cost to resale value. You might recover 50 cents on the dollar - if you are lucky - particularly over time. Particularly in this economy.

You may find, upon examining your motives - in your quietest of moments - that the real reason you are remodeling is for status.

Get off the status-seeking bandwagon. Turn off the TeeVee. Stop trying to impress the neighbors or theoretical people you don't even know. Work with what you have and make a kitchen that is functional and useful.

The photo above is of our kitchen in our summer home. Pretty nice, eh? When we bought the home, the Merrilat cabinets were 15 years old. The appliances were functional, but black, not our first choice. Our initial instinct was to tear it all out and do it over in more modern materials, including a granite countertop, fancy tile floors, and solid wood cabinets. And of course, all new appliances.

But then we stepped back and thought about it. New cabinet knobs made the cabinets look more craftsman (and the faces are solid wood). The cabinets are in good shape, and surprisingly well made. A lively brick colored texture paint brought color to the kitchen. We replaced a down light with some track pendants (cheap and easy to install). Cabinet top florescent lights were replaced with rope lighting for a subdued lighting effect. The split system A/C was painted black to look more modern and to blend with the other appliances. We added a portable island from Lowe's to extend the countertop and add a cutting block. And we replaced the carpet with inexpensive engineered hardwood flooring.

Total Cost? Probably less than $2000, not counting the Stickley dining set! The point is, you can do a "makeover" without spending a ton of dough. All it takes is some imagination and resisting the urge to tear everything apart and starting over.

The Schwartzenbaum's kitchen is nice, but they replaced existing cabinets with the exact same size and shape cabinets in a different finish. Perhaps new cabinet faces could have done the job for a lot less money - in terms of material cost and especially labor.

Recessed lighting is all the rage right now (after people tore them out in the 1980's as being energy-inefficient!). But rather than drilling holes in the ceiling and spending hundreds, if not thousands on electrician's bills, consider inexpensive track lighting that any home owner can install - even pendants.

And rather than tearing up a tile floor (which can last 50 years) to replace black tile with grey, consider working with an existing color by altering wall paint or lighting.

The point is, you have options - other than spending tons of money. And spending tons of money won't pay back, in terms of resale value or functionality. And no, no one is impressed with your fancy kitchen. It doesn't say anything about you as a person. In fact, it says less, in many ways.

And as for granite countertops, they are very nice looking, but ask someone who owns them about glass breakage. Stone is very unforgiving of your dishware, and even setting down a glass too hard can result in shattered glass spraying everywhere - a real treat when you have company and food is laid out all over. Yes, it is impressive to look at, and it looks expensive. But in today's economy, we all know it is not really all that pricey. If you have functional counters that are easy to care for, that is a real plus. Tearing them out to install granite to impress the neighbors, is, well, kind of dumb.

And as for impressing people, sometimes that sort of thing can backfire. It is possible to be overly intimidating with expensive things in your home. People feel uncomfortable when you throw your success and status in their face. Folks who you might otherwise call friends, might be turned off by your over-the-top kitchen and fancy cars. You may run the risk of being called a materialistic yuppie...

The photo below is of the kitchen above, before we remodeled it. It was a clean, functional kitchen, but not to our tastes. But rather than "tear out and start over," we ended up doing a makeover ourselves, without having to hire anyone (other than for the flooring) and without having to spend a lot of money. In retrospect I am glad we didn't waste 20 or 30 grand doing what the Schartzenbaum's did. Because the end result would have been about the same - except that I would be that much more in debt.

You can live better by living stingy! 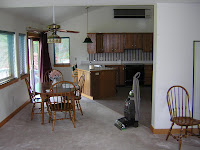