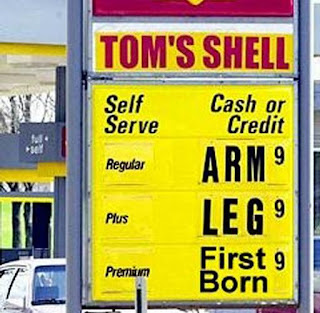 Gas prices have eased somewhat, recently, and no one is talking about them. But gas still is costly and gas mileage still matters.


As gas has hovered under the $3 a gallon mark lately, many folks have stopped obsessing about the price of gas. And sales of lower gas mileage cars and trucks have increased somewhat as a result. Granted, no one is going out and buying 8-mpg crew-cab dually trucks to commute to work anymore (unless they are total idiots), but sales of SUVs, particularly smaller SUVs, are fairly brisk.

Does gas mileage matter anymore? The answer is YES, and in a big way.

First, don't take this season's relative low fuel prices as any indication of a trend in fuel pricing. As someone who has experienced every gas price shock since the Arab Oil Embargo of 1973, I can tell you that when gas prices seem to get lower, it is only the calm before the storm. Gas prices will spike and peak again, within our lifetime, that much is certain. $4 a gallon gas will come back before you know it. $5 a gallon gas, once though impossible, will be a new reality sometime soon. Before I die, $10 a gallon will seem "reasonable".

Why do I know this? Because as a youth, no one thought that gas would go over 50 cents. When it did, everyone predicted the end of the world. The world didn't end, and we moved on. We all said, "Well, it will NEVER hit a dollar-a-gallon!"

And of course, it did. Each major dollar level becomes a new benchmark in pricing, and we will surely see major benchmarks met in the coming years, with prices oscillating back to lower levels after people freak out and start conserving. It is like a pendulum. Gas went down to 78 cents a gallon during the Clinton administration, and we all bought monster trucks, SUVs, and motorhomes. It spikes to $5 a gallon during the Bush administration, and we dump these gas hogs for pennies on the dollar.

During a lull in gas prices, it may be tempting to buy a car, truck, or SUV that gets lousy gas mileage, and think nothing of it. But when prices spike, you end up regretting that decision.

And the funny thing is, there really is no "need" to own a gas hog. If you go back in time to earlier days of the automobile, many folks made do with cars with far less horsepower and far less weight, and got along fine. Even heavy trucks of the 1930's and 1940's had little horsepower. 100HP was considered a lot back then. Today, many folks feel they "need" 300 HP in a two-door coupe. Why is this?

Technology has improved, to be sure. We can make more HP with less fuel than ever before. The free market economy, in tandem with government regulation of mileage (CAFE standards, emissions standards) has produced a wonder of the modern world - the 300 HP car that gets 30 mpg on the highway.

But, for a little less money, you can "make do" with 200 HP or less, and get 35 mpg on the highway, or perhaps 40 mpg, if you are willing to "settle" for the 100 HP that once powered Mack Trucks during the war.

Things like full-time four wheel drive can really take away from your gas mileage. Even part-time 4WD can suck away gas, in terms of driveline friction and excess weight. If you are thinking of buying an SUV or pickup truck, ask yourself if you really "need" this feature, or whether you'd prefer 3-5 mpg in better mileage.

Moving forward, I can tell you that I personally would have a hard time buying any car that gets less than 30 mpg, if not 35. And for a truck or SUV, it should get over 20, preferably 25, mpg, in regular service.

I filled the tank on our 21 mpg SUV the other day, and it came to over $50. That sort of staggered me, in terms of fuel cost. $50 buys a nice meal at the Italian restaurant down the street - with a bottle of wine. The cost of fuel is very real, and yet many folks just pay the bill without thinking, considering it to be the "cost of doing business".

Don't be fooled by low fuel costs. Gas mileage still matters - in a big way. While it may be tempting to buy a "hemi" or a huge v-8, down the road you may regret such a decision, if you are using such a vehicle for general transportation.
Newer Post Older Post Home