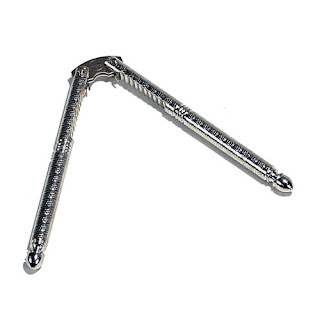 Chances are, you have one more of these in your kitchen drawer - or know someone who does.   Did you ever wonder where they came from?


We tend to take for granted a lot of things in our lives.  We buy consumer goods and never bother to think of how they were made, where, and by who.   That is, of course, unless you are an Engineer.

The nutcracker or lobster cracker shown above was invented by a fellow name Henri Quackenbush, who ran a factory in Herkimer, New York.  And the story of this nutcracker crossed my life in two ways, at nearly the same time.

When my Father was laid off from his job as Vice-President of a failing Auto Parts company (making truck clutches in the rust-belt city of Syracuse, New York) he looked around for something to do.  Jobs were hard to come by in 1982, and no one was hiring managers who were over 50.  So he thought about becoming an entrepreneur.

One of the opportunities he looked into, was buying the old Quackenbush factory in Herkimer, where they made these nutcrackers.   I am not sure where he thought he would get the money to do this, but he looked into it.   His description of the place was pretty interesting.

"They have two little old ladies assemble these things and pound the rivets into place," he said.   The handles were heavy steel with nickel plating.   Apparently, these two little old ladies have been assembling these things since World War II, and if you have one of these old nutcrackers in your kitchen drawer, one of these two women assembled it.  And they are probably long in the grave at this point, or perhaps retired in Florida.

(By the way, I have a set of these crackers, with picks, in a nice tartan plaid nylon pouch.  And no, you can't have it.   Very retro.  Very cool.  The Originals are apparently stamped HMQ if you have one).

Well, the problem was, these two little old ladies were going to retire soon.   And no doubt, they were union workers, and their wages were pretty steep - as well as their retirement and health benefits.  So the management of the place decided that it was time to look into automation.

Now, at the time this was going on, I was spending my waylaid youth hanging out in biker bars and drinking beer and smoking as much pot as I could get my hands on.   It seemed like the thing to do at the time.  And one of my friends was a machinist who lived above one of the bars, and we smoked a lot of dope and would talk about work and stuff.

One of the projects he was working on was an automated rotary assembly machine, which would take the two arms of these nutcrackers (fed in from a hopper), place them in a die, then insert the stamped metal hinge elements and spring, and in a final stage, insert and hammer the rivets that hold it all together.  The whole point of the machine was to put these two little old ladies out of a job.

Sounds pretty simple, but the machine, even back then, cost well over $100,000 - perhaps far more.  And it was a monster of a machine, too.   When they completed it, it was loaded onto a flatbed tractor-trailer, and hauled to the factory with a wide-load permit.   No door in the place was big enough for the machine to pass through, so they knocked a hole in the wall so it could be installed.

My Dad took a pass on the nutcracker factory.  Chances are, he couldn't afford it.   But he probably was smart to do so.   Competition in a business like this is murder.   It would have been a business of margins, and trying to run a factory in a high-wage and high-cost area like New York State (not to mention having to pay off the mafia) would have bankrupted him in short order.

The nutcracker business was sold from Quackebush to M.E. Hueck, Co., in Cincinnati, Ohio.  They still make these things, although I am not sure if they still made in the USA.  Of course, there are a host of copycat nutcrackers on the market now - the Patent has long since expired.  An most of these copycat crackers are made in China.  You can tell the new ones, as they bars are thinner (made from turned rod stock) and the plating isn't as nice.   But let's face it, you aren't about to spend $20 for a set of lobster or nut crackers, are you?  And that's about what a really nicely made set, made here in America, with union labor, would cost, if they made them today. 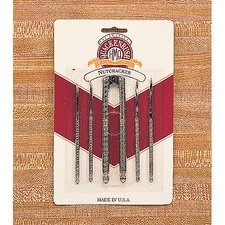 This Quackenbush nutcracker set is available on Amazon for $6.99 for the set.  It says "Made in USA" on the card.   Is the automated machine my friend made still running?  Or are two new little old ladies hammering these things together?


It's funny, but a lot of things you see every day used to be made in small cities and towns in places like Central New York.  Do you have a "pencil" type tire gauge in your toolbox?  If so, it was called a "Syracuse" gauge back in the day.  But like anything else, that plant closed long ago, and production moved to China.   Yea, the new ones are cheap - and cheaply made, too.   Appropriately, the company now makes electronic tire pressure monitoring systems.   After all, who checks their tire pressures anymore?
Newer Post Older Post Home