It's just ONE GUY? 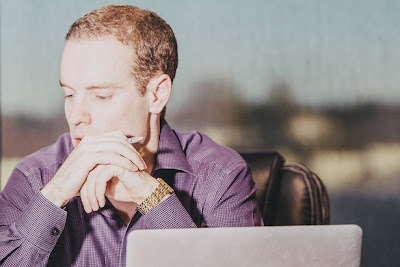 This douchebag can't even spell his own name right.   What is it with people who spell their names funny?  It seems to be a pattern - a pattern to watch out for.

In a recent Atlantic Monthly article, they detail the life of an Internet "entrepreneur" who by the age of 26 has made and lost fortunes of over $100 million dollars.   He made his money through some shady online dealings, and lost it again, through fines from the FTC and through litigation.

One of his schticks was to put up these ads for "one trick of the tiny belly" and other Pavlovian Response Ads, and then lure people to sign up for "free" trial services which then charged their credit cards perpetually, using the Negative Option technique.

What floored me about this article was that it made it seem that all this internet flim-flammery (is that a word) was due to ONE GUY.   Is that at all humanly possible?

Perhaps not.  Because when one person figures out a scam or system, others will surely follow.   But it does illustrate that all it takes is for one guy to piss on the seat, to really screw up a good deal.

I reported before about the graffiti problem on the freeway between Fremont and Oakland, back in the 1990's.    A brand-new freeway, covered with ugly "tagging" from one end to another.   Gang activity?  Urban decay?

No.  It was ONE GUY - some spoiled rich kid - with his Dad's credit card, a new car, and a lot of time on his hands.

It is like that Penny Stock Dump Scam - which turned out to run by a teenager in New Jersey in his bedroom.   When the SEC fined him millions of dollars, he said, "who do I make the check out to?"

Why do we put up with this nonsense?   Well, what he is doing isn't really illegal - or if it is, it is hard to prove.   You put up obnoxious ads for "one trick of the tiny belly" to sell Acacia Berries (or some such bullshit - like a tooth whitener) and then have the chumps click through to a "free trial" link.   They cough up their credit card numbers and you sign them up.   But, using negative option techniques, you make it hard to cancel these services.

From a legal perspective, they are doing nothing wrong - or at least not anything that is easy to prove.   You can't prove a negative, as they say.   So you can't prove that you cancelled your service, particularly if you didn't sent a certified letter to that effect.

And the FTC finds it hard to prove fraud, unless you can gather thousands of people together to show that they all sent certified letters cancelling their free service - which ain't likely to happen on the FTC's budget, anyway.

One or two people?   The company can always claim "computer error" or "clerical error" or "we lost the paperwork!"   So sorry, Ma'am, we'll refund your $39.95 right away!   But we'll keep the $100 million we got from the other chumpsters, thank you.

The FTC tries hard to rein all of this in, but their budget is miniscule, and the number of flim-flammers out there is huge.   As I noted before, I testified for the FTC in a disbarment hearing at the USPTO - going after a Patent Attorney who was in cahoots with an Invention Broker (yet another in a laundry list of scams going on out there).

The FTC tries hard, but they can only annoy these sort of folks - and rarely put them out of business for good.

Of course, it doesn't help any that "legitimate" online players like Google, Facebook, Yahoo, and others, all take advertising dollars from scam artists or people doing illegal things.   As I noted in an earlier posting, Google displays ads for sites that download malware into your computer - sites that mimic the look and names of legitimate online site.   And as the Atlantic article cited above notes, Google has been fined a half-billion dollars for knowingly taking blatantly illegal ads.

And it is not hard to figure out these things, with a little searching online and a little skeptical thinking.   But of course, most people in this country don't think rationally.   They go to a church and think that what some guy said 3,000 years ago, was the last word on anything - a guy who wiped his ass with his hands and wore a sheet.    They believe everything they hear about on the television (and increasingly, on Facebook or whatever) without any skepticism.  And if you try to tell them the real deal, they refuse to believe it.

I gave up on trying to "save" people from invention brokers a long time ago.   A guy called me up with an invention and told me than the invention broker wanted $20,000 from him and that his invention was the cat's ass.   While on the phone, I downloaded several Patents that described the same invention - and mailed them to him, free of charge.   I explained to him that he can't Patent an invention that was already Patented, and steered him to some websites that explained how invention brokers worked.

At first, he was happy that I saved him $20,000.   But a couple of weeks later, after the constant nightly phone calls from the invention broker wore him down, he called me and proudly proclaimed that he had sent them $20,000 to "Patent and market his invention."   He told me that I was "unnecessarily pessimistic" about his invention, and that the brokers said it was a sure thing!   After all, they kept calling him, night after night, making him feel so important - and they told him that his invention was all they could talk about at their meetings!   I wished him luck and hung up - they had his money at this point, and there was nothing he could do about it.

Several months later, he calls again - haranguing me for not "warning him" about the invention broker.  "I sent them all my money, and you never warned me!"   When I pointed out that I told him his invention was unpatentable and that invention brokers just take your money and do little else, he was unfazed.  "You should have stopped me!" he said.

Sadly, that is the ultimate nature of the beast.   People act irrationally, and then expect other people to bail them out - and blame not their victimizers, but the people who try to help them, for their plight.  You can't save people from themselves, so don't even try.  The best you can do is vote for the candidate who doesn't think the FTC is "unnecessary regulation" of "legitimate businesses" and wants to cut their enforcement budget down to zero.   But even then, I wonder.   The folks who are most often victims of these scams are the ones most likely to vote Republican (let's face it - they'll believe anything, right?  That's how the tea party got started).

The best you can do is take care of yourself and fulfill your obligation under the unwritten social contract.   Act rationally in an irrational world, and you will prosper - without having to resort to scams and dodges or get-rich-quick schemes.

And as for the scammers?   Well, sometimes it seems like they win.   But the wheel of Karma does spin around pretty fast - and usually these sorts of folks never end up happy, in the long run, no matter how much money they make in their schemes.   Making a million bucks is a fine and wonderful thing.   But when you have to be constantly looking over your shoulder, it certainly isn't relaxing.

* With regard to Penny Stock Pump-and-Dump Scams:  One wily fellow I read about recently, was able to profit from these scams, on the sidelines, by watching for large buys in penny stocks, and then figuring out which stock would be the subject of the next pump 'n dump.  He would buy in, and then sell out before the peak - piggybacking off the scammers in a perfectly legal manner, as he was not the one hyping the stocks.
Newer Post Older Post Home