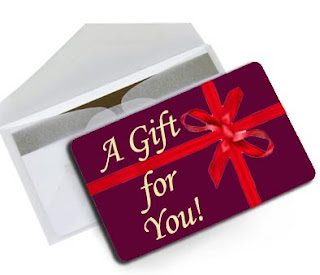 It's the time of year for Gift Cards.   Are these a good deal?  For merchants, they are!

We are told that we should 'Never look a gift horse in the mouth'.   But a gift card bears looking at.  There are a number of reasons these things are a raw deal for consumers, and why merchants love them so much.

The main thing is, on average, for every dollar spent on a gift card, less than a dollar is purchased.  Some statistics suggest that 10% of all Gift cards money issued is never redeemed - a whopping $2 Billion a year in windfall profits for retailers and gift card providers.

Why is this?  A number of factors.    Many people (including my spouse) look at Gift cards as something "special" to be "set aside" for a "special occasion" - and as a result, they are lost, never used, or they expire before they can be used.   Others simply lose the cards, put them in a desk drawer, or never use their entire value.

As a result, the gift card remains un-cashed  - in whole or part - and the retailer has a windfall profit as a result.  When you can get people to pay you for nothing that is a pretty sweet deal.   And that is why you see so many gift cards offered at stores - it is a raw profit monster for retailers.

Gift cards are profitable in other ways, as well.   For example, Mark's employer gave him a gift card to a local restaurant for $25.   That's fine and all, but an entree at that restaurant is at least $15, so you can see than "dinner for two" will result in spending more than the gift card amount.   And since it is a restaurant we don't normally go to, this will result in a restaurant meal we didn't plan on spending money on, and thus increase our consumption, not decrease it.

So gift cards end up priming the pump on consumption - getting people to spend money when they might not have spent it at all.   If Mark's boss had simply given him $25 in cash (which seems so crass, but is really the same thing) he might have spent it at a lesser restaurant, used it to buy groceries, or put it in his IRA.  He would have a choice on how to spend.   With the gift card, not only is the choice made for you, but it entices you (or requires you) to spend some more of your own money as well.

Note that gift certificates can work the same way - or not.  At a recent raffle charity, one prize offered by a local restaurant was "Dinner for Two" which included appetizers, entrees, a bottle of wine, and dessert.   Other than tipping the waitress, there was no additional expense required for the recipient of this "gift".   A fixed-money value card, however, at less than the price of a meal, is merely an invitation to spend more.

So what do you do if you get a Gift Card?   My take on it is this:  Spend it - right away.   You don't need some gift card sitting around in your desk, being forgotten or lost, and adding complexity to your financial situation.   If you are going to use the Gift Card, use it - and use it before you forget about it.

Gift cards have a host of other problems as well.   Some folks use them like credit cards (and some can be used, nearly anywhere, like a credit card).    But often fees are applied to the cards, if you check the balance on the card, try to add money to a card, or the like.   Banks love these cards because they are sure money-makers - they collect credit card fees when they are swiped, or they charge the purchaser a fee for buying the card, or they charge the recipient for using the card.

Gift cards have fraud issues as well.   Some cards had PIN numbers printed on the back.   Shoplifters would take a card off the rack, scratch off the coating and write down the card number and PIN number, and then put the card back on the rack.  If someone bought the card, failing to notice the PIN number was revealed, the card could be activated.  The thief could then go online and use the card and PIN number to purchase goods - using the unwitting consumer's money to do so.  The recipient of the gift card is chagrined to see that the gift card has a zero balance and zero value.

So why do people give gift cards instead of cash?  (and mea culpa here, I have given gift cards in the past as well).   The reason is purely emotional or status.  We view giving cash as crass and low - and even insulting.   You give money to someone, particularly a friend, and they act offended - as if you spit in their hand.

And movies and television promote this idea.   The grizzled old fellow helps the tourist fix a flat on his car, and the tourist offers him money in exchange.   The oldster demurs, and even acts offended that he was offered something plebeian as money, in exchange for labor.   The message is clear:  giving people money is an insult - as if they were prostitutes or something!

But oddly enough, money is the one thing that most people do enjoy getting.   People line up to buy lottery tickets - hoping to "win big" and have a huge pile of money.   In any action-adventure movie, there is always an aluminum suitcase full of money shown, in at least on scene, which the audience salivates over.  Lookat all dat money!  Yee-Haw!

So yea, we all want money, particularly the people who say they don't want money.   And yet giving money to someone is considered tacky or tasteless.   At least in modern times.

When I was a kid, my Grandmother would send me a check for my birthday - or a $5 bill in a birthday card.  Cake and candy and toys were nice and all, but often this was the present a child looked forward to the most.   As I noted many times in this blog, money represents power and control, and as a kid, you don't have a lot of that.   Even a few dollars is a big deal - a chance for you to make purchase decisions and make others do your bidding, even if it is for a 10-cent candy bar.

Sadly, gift cards are not going to go away anytime soon.   They represent yet another escalation in the complexity of our personal finances.   In addition to tracking our bank accounts, credit cards, mortgage, taxes, investments, and the like, we now have to dick around with these gift cards and their own arcane set of rules and regulations.  It's like discount coupons - being thrust upon us.

And that's why I try to use them - and spend them fast - or get rid of them.   Nothing worse than cleaning out a desk drawer and finding a "lost" gift card from years past - a gift card that has since expired.

When does your gift card expire?  Beats me.  We received one from "Mercury Gift Cards" which supplies the restaurant industry.   Their site will tell you the balance on the card, but not much else.  They do have a FAQ aimed at retailers, which discusses reports provided, which include expired cards, but no information is provided to the consumer.

Another site shows how the cards can be programmed by the retailer with expiration dates.  The default is "no expiration" but the consumer has no way of telling whether the retailer set this to default, or to a number of months for expiration.

"The more complicated you can make any financial transaction, the easier it is to rip-off the consumer," a great man once said.   Gift cards are just another unnecessary level of complexity.
Newer Post Older Post Home