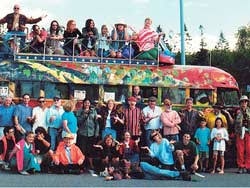 One thing I notice when perusing comments sections in news stories, as well as reading news stories themselves, is the emergence of a Generational Warfare between the very young (under 30) and those perceived as "Baby Boomers" and older.

The far-right misclassifies this as "Class Warfare" - pitting the poor against the rich.   But I think Generational Warfare is a more appropriate term.

What do I mean by this?  And is this anything new?   With regard to the latter, I think not.  Generations have always distrusted one another for, well, generations.   But unlike the Generational Warfare of yesteryear, today's young folks aren't rejecting the materialism of their elders so much as wanting it handed to them.  And I think this distinction has more to do with demographics, than anything else.

In the 1960's and early 1970's, many young people embraced a number of "movements" that alarmed their parents and elders.   The baby boom generation was huge - and out-populated their elders.   Riots, bombings, protests, sit-ins, and the like were scary to the WWII generation, who saw these unwashed hippies and radicals as a threat.

But the hippies didn't want to take away from their elders - at least not directly.   Granted, they had an agenda of social welfare programs that would be paid for by increased taxes.   But at least on the face of it, they eschewed materialism as "evil" - and didn't want so much as to take away, but to be left alone.

Today, we see a different scenario playing out.   The current crop of 20-somethings is a smaller generation than the one preceding it.   We have fewer young people today, in terms of percentage of overall population.   Our country is aging, and the average age in America is increasing.  And these older folks are also wealthier, by dint of age alone.   The kids to day look about them and see oldsters with defined benefit pensions, paid-for houses, and brand-new cars, and believe that they may never have such things.   And with regard to defined-benefit pensions, they probably are right.

But unlike the hippies, the young people of today are not so much rejecting materialism, but rather embracing it with a furor.   What pisses them off is not our society's obsession with material things, but the fact that they aren't getting enough of them.   Where's my new iPhone and Abercrombie shirt?   I want a new Toyota Scion - with a fart muffler and bling rims, if you please!

And from their perspective, it is the older generation that has somehow "taken away" their toys, once they have graduated from college and have to pay back onerous student loans - often without a good-paying job, too.   Mom and Dad are no longer handing out money, as they have to save for their own retirement.  It all seems so unfair!

And I see this, all the time, in inquiries I get to this blog.   Google Blogger allows me to see some selected search terms from Google, Bing, and even Yahoo, that find this blog.   And many of the searches are somewhat disturbing.   Regularly, I see searches likes, "How do I get my Dad to stop being so stingy and buy me a new car?"    No, really, kids think this way - that Dad has plenty of dough and can cough up twenty grand on a whim to give them a new car, right out of college.  (And sadly, many middle-class parents spoil their children in this way).

The OWS protester sits-in on Wall Street, not to protest some war, but because they don't want to pay back their student loans.   They want a freebie - and many are up-front with the proposition that student loan debt should just be "forgiven" on a blanket and nation-wide basis.   And as I noted in an earlier post, many will text and tweet this from the new iPhone their parents bought them. 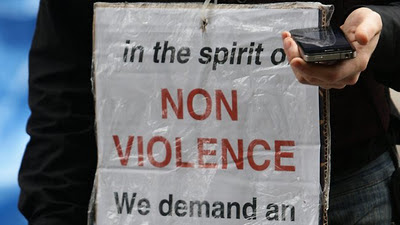 The revolution will not be televised.  Neither will it be tweeted or texted.

The latest gag - fueled by the Service Employees International Union (a name that just rings of Marxism) - is the idea that slacker jobs should be paid on a par with qualified professionals or skilled labor.   Kids are "fighting for a living wage" - arguing with a straight face that a crap job at McDonald's should pay $30,000 a year and come with health insurance as well.

They don't want to better themselves, acquire skills and talent, or try to climb the economic ladder.  No, rather, they would prefer to "work for the man" and get paid highly to do it.   The hippies of years past would have called that "selling out" and I think most would rather have starved before working for McDonald's.

I wonder how things would have been different at Alice's Restaurant if it were a McDonald's franchise?

Of course, we know how the hippie thing worked out.  Eventually, people get older and get tired of sleeping in unheated barns on the commune, and decide they want an espresso maker and a Volvo - as well as a home to raise a child in.   So they sell out - get a job - and start to accumulate wealth over time.  The leftist becomes a Republican, over time.  Jerry Rubin, the activist, becomes Jerry Rubin the Millionaire.

It takes only time.   And a surprisingly short period of time.  30 years ago, I was a college dropout, living in my own squalor, smoking dope and hanging out with friends and drinking beer.  20 years ago, I had graduated from law school, and was making close to the vaunted six-figure salary.   10 years ago, I had my own law practice, as well as a thriving Real Estate business.   Today, I am semi-retired, fairly well off, and not really inclined to "share the wealth" with some 20-something who majored in Liberal Arts and can't figure out why the world doesn't owe him a living.   Time heals all wounds, unless of course, you keep smoking pot and, like a friend of mine, end up living with your parents at age 55.

Will the same thing that happened to the hippies happen to this current generation of young folks?   I think so, if they are not waylaid by these movements.  If the OWS protester keeps clinging to the idea that the way forward entails having debts forgiven and making a living from crappy service jobs, it is likely they will never progress very far.   Even if these unrealistic wishes were granted, (which would be a nightmare for the economy) they would still be stuck at the lower end of the income spectrum.  Engineers, Doctors, Lawyers, Businessmen, and Investors, would still be making more money - and lead more interesting and fulfilling lives.  Pining to make a living from a crappy job isn't the answer.  The answer lies in self-improvement.