Was Gold such a good investment?  For most people, no.


The economy continues to improve, and it seems that many people are just now figuring this out.   Despite the drumbeat of bad news from Fox News, unemployment is down, inflation is down, mortgage rates are down, the stock market is up and people are generally doing OK, if not having spectacular financial orgasms every day as we did in 2005.   We know how that worked out.

And that spells doom for gold.   As I noted before, gold is a fear metal and little more than a place to park money if you are afraid that currency will devaluate or otherwise be unstable.

Gold is trading below $1200 these days - about the level it was trading four years ago in July of 2010, just about the time people started panicking and buying gold.  If you bought then, well, your "investment" is doing poorly.   With inflation, you have come out behind.   If you were dumb enough to buy when it hit $1800 an ounce (briefly) then your "investment" dropped by 30%.   Ouch.

But, you say, you bought at $900 an ounce, back in January of 2009, just as the market crashed - cashing in all those nasty stocks that went down in value and putting everything into "stable" gold.  If so, you are really fucked, big time, because those stocks you sold at the nadir are now worth more than double what they were, and your gold meanwhile has only 30%.  You missed out on the bull market by panicking.

What will 2015 bring for gold?  Probably more of the same.  If you view the chart above, you can see that the peak has clearly been reached, and the price has steadily declined.   It may level off around $1200, which it seems to have done in the last year or so.

But again, the value of gold is entirely based on emotional thinking.   They are pulling it out of the ground for $500 an ounce (cost) and anything above that is just people thinking it is worth more than that.   This is not to say it will go down to $500 an ounce, but I think it could get close.

The scenario I see happening is when it goes below $1000 an ounce, which could happen as the economy continues to improve and people start to realize it is.   Gold bugs will start to see they are "missing out" (actually, already missed out) on the stock market boom, and like the folks who bought mini-mansions in 2007, will sell their gold (before it goes lower!) to buy stocks.  Timing is everything - that and not listening to Glenn Beck, who now admits he is crazy.

When gold hits triple digit prices ($999) it will cause a more psychological reaction, and more people will sell.   I think it could hit $800 an ounce or lower, before leveling out.

The price of gold isn't based on sanity - it is based on insanity.   People bid it up based on perception.

Compare it to the price of oil, for example - another commodity.  Oil actually has uses - and is used.  People don't hoard it.  And right now the price is plummeting, as the supply is increasing and demand is decreasing.  And at $80 a barrel, this spells trouble for people whose production costs are $90 a barrel, such as in the Bakken formation.

As such, you can expect to see more marginal oil fields close down, and thus the supply decrease, and the price go back up.

Gold clearly doesn't have this problem, being based on insanity.   The price could go down to $800 an ounce, and the folks mining it could still be making a profit and thus making more of it.   And since gold is not consumed in any great quantities, the world supply will continue to increase.   Gold doesn't get burned or destroyed.   It may be turned into electronics or jewelry, but jewelry can be melted down and electronics recycled.

It is hardly a metal of limited supply, or indeed "precious".   Yet, if you talk to a gold-bug, well, they will tell you otherwise....

NOTE:  It is hard to find hard numbers on gold production, at least online.  I find a lot of websites from 2008-2010 that claim that gold production is declining and that gold is getting harder and harder to find and thus will become more valuable.

This site, for example, claims that the historic total worldwide production of gold, for all time, was 165,000 metric tons - and that we are running out!  However, if you scroll down, they do note that about 2500 metric tons are mined annually (and the accompanying chart shows how mining has been on the increase over the last few decades!).  This means the world supply of gold increases by 1.5% annually, which is a pretty good clip.  Even though 12% of this is used for industrial purposes, this still means the world supply increases by  1.32% per year.  I am not sure we are going to "run out" anytime soon.  In fact, the amount of gold in the world just keeps going up and up!


NOTE:  Despite Gold's dismal record over the last few years, some idiots are still predicting it will hit $5000 an ounce "in a few years".   When asked for quantitative data as to why, they get slippery and elusive and have no hard numbers.   Again, it costs $500 an ounce to "make" - and every year, the world has an increased supply (over 1%!).   So overall, we end up with more and more gold, over time.

Demand is based on fear and fear alone.   Once fear evaporates, the price of gold plummets. 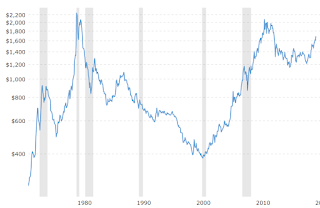 Gold chart corrected for today's dollars.  Note how the "flat" period after 1980 shows an actual decline, because of inflation.
This chart illustrates the price of gold as corrected for today's dollars.  You can see the small bubble circa 1974 when we went off the gold standard.  And you can see the HUGE bubble in 1980 when America was in far worse recession (IMHO) than in 2009.  Notice how sharply the price dropped - and how long it stayed flat.   If you bought at the height in 1980, you are still behind, even today, in adjusted dollars.  What does this say about today's bubble - or the inherent value of gold?
The only ones "winning" in the gold business are those mining it, selling it, and those selling gold-back securities.   A few lucky people who bought at $500 an ounce and sold at $1200 made some dough.   But then again, there are a few lucky people who do better than that in stocks.
I bought AVIS at 74 cents a share and withing a few years it went up 3000% - which makes gold look sick by comparison.   This does not mean stock-picking is a swell idea or that AVIS is now a good investment - or that it will go up another 3000%

The supply of raging true-believers, it seems, has not diminished, however.
Newer Post Older Post Home
View mobile version