How Camping Has Changed - Our Affluent Lifestyle

If young people today had to live the lifestyle of their parents at their age, there would be a revolt.


We just returned from an Army Corps of Engineer campground, which are very nice and inexpensive.  What was interesting was that a host of young folks in their 30's arrived - with kids in tow - driving enormous monster trucks, towing even more enormous quadruple-slide 40-foot 5th wheel travel trailers.

Whatever you've heard about how "bad the economy is" forgetabout it.   There are a lot of wealthy people in this country.   Funny thing is, you ask one of these 30-somethings, who has three kids, a huge travel trailer, a monster truck and an SUV towing a bass-boat, they will tell you they feel "oppressed" under the "Obama Regime"   According to them, their economic situation is dire and the wolves are at the door.

This got me to thinking about how camping has changed - and our expectations in life in general have changed.   Back in the 1950's and 1960's, a family might go camping in the family station wagon - towing nothing, with a Sears tent and a few sleeping bags.   Dad built a fire and the kids roasted hot dogs.   Mom made meals and the exciting activity of the day was a hike - which involved walking.  No golf carts or jet skis.

Oh sure, there might be a few people who went high-dollar and got one of those pop-up campers.  Maybe Grandma and Grandpa, who were retired, decided to put on the dog and buy a Serro Scotty "canned ham" travel trailer.  And there were a few ostentatious people who had an Airstream travel trailer or one of those Winnebago motor homes.   But camping was a lot simpler then, and if you go to older State and National Parks (like on the Blue Ridge Parkway) you see this reflected in how small and primitive the sites are - not nearly large enough to accommodate today's big-rigs.   Not only is electrical service expected today, but a simple 20A, 110V plug won't cut it.   50 Amps of 220V electricity is needed - the level of service that powered my first house.

Today, young folks show up in huge campers and hook up the satellite television so the kids can sit indoors and watch TeeVee, when they are not tubing or jet-skiing.   Around every mealtime, they all pile into multiple vehicles (because Mom drives her SUV towing the ski boat, behind Dad towing the portable house) and they go to a restaurant to have breakfast, lunch, and dinner.   Cooking hot dogs on a stick?  Simply not in the equation.   S'mores is now a flavor of ice cream, not something you make over the fire.

Some folks even have pizza delivered to their campsite.  No, really, I am not making this shit up.

"Roughing it" has changed its meaning over the years.

I think back to the 1960's when I was a kid and also to my siblings' experience in the 1950's.  We had one tiny black-and-white television for the whole family, that might get three channels on a good day, plus some fuzzy communist UHF crap called "public TV" when the weather was just right.   It was a big day, I am sure, when my parents bought a second car.   Today, most families have three or four, and many "struggling middle class" kids expect a brand-new car when they turn 16.

Our lifestyle has changed over the years.   We have become a much more affluent country, and we haven't stopped to bother to appreciate it or be thankful for it. It is only when we feel that something is being "taken away" that we get outraged at the injustice of it all.  After all, we are used to having so many toys in our lives.  And you know what happens to brats when you take their toys away - they scream bloody murder.

The problem is, of course, the 30-somethings I met in the campground with the amazing array of motorized accessories were financing it all on monthly payments.   They had a good job at the mill or maybe the fracking fields, and were getting paid very well for the level of work they were doing.  So they took out loans over 10, 20, or even 30 years, based on the premise that a heavy machine operator will always be making a six-figure salary, even when oil goes down to $50 a barrel.

And when that happens, well, it will get ugly, really quickly.

You know, maybe camping in a tent wasn't so awful after all.   And maybe having money in the bank is a better deal than having shiny things. 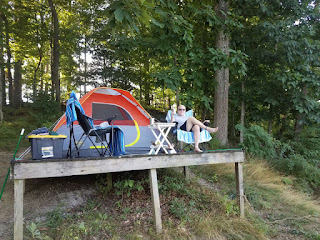