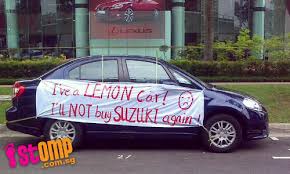 Are cars really lemons, or are people just generally unhappy?


We are staying in an Army Corps of Engineers campground in Southern Wisconsin, along the mighty Mississippi river.   A fellow next to us has one of these very expensive motorhomes and on the front he has a professionally made sign saying "Ask me how (manufacturer name) treated me!" with a picture of a lemon with four wheels.

I felt bad for the guy as it must suck to go around so unhappy and bitter all the time.  When pressed for details as to what was actually wrong with the unit, he raised a number of trivial concerns - pieces of trim falling off, and the like.  The reality is, of course, that he had buyer's remorse and regretted spending the money on the coach - and was probably upside down on the loan.

I was talking to another neighbor, and he related how, years ago, he did the same thing, with both a Chevrolet and a Volkswagen - sitting out by the dealership with yellow balloons tied to the car and huge signs saying "don't buy this car, it's a lemon!"   I told him I was glad I did not know him then.

In the second instance, this degraded into a fistfight with the sales manager, which was not a good idea.

On the Chevrolet, he put a license plate "LEMNCHVY" on it and kept a sign taped to the window listing his grievances against GM.   Several years later, his mechanic asked him, "what was wrong with that car, anyway?   I see you driving it every day to work!  For an unreliable car, it is awfully reliable!"   And the mechanic had a point.

What makes people do these things?  And is this a good way to get consumer "justice"?  The answer to the second is a clear "NO" on many levels.  On BMW discussion groups, I see this all the time.  Someone posts a message saying they are having trouble with their car.   They post in a reasonable tone and set forth the facts.  In some cases, a response is posted by BMW NA, saying, "please contact us to resolve this issue."

Others start off by bashing BMWs and saying what crappy cars they are.   As you might imagine, this doesn't go anywhere.  The company isn't about to do anything in the interest of "consumer satisfaction" when the consumer clearly will never be satisfied.   Trashing the reputation of a company online is a one-way street.  Once you've pulled the trigger on slander, they have no interest in helping you.

And often the real reasons behind this customer discontent are based more on buyer's remorse - the feeling they paid too much for a car, bought the wrong model, or whatnot.   They pick at imagined flaws in the vehicle or exaggerate small problems into big ones.

My neighbor ended up having the Volkswagen taken back under the "Lemon Law" and ended up buying another one - from another dealer.  The first dealer refused to sell him any more cars.   The second car was a different model - the model he decided he really wanted after buying the first one.   I wonder if the real issue wasn't the imagined "defects" in the car so much  as it was a desire to get out from under loan payments and into a different car.

With the Chevy, well, they did some repairs and whatnot, but he was never happy.   But as his mechanic pointed out, he drove it to work every day for years, so what was the problem, again?

In both cases, the issues were resolved not by painting lemons on the car and protesting, but by going through channels and procedures (calling the zone office, documenting problems, writing letters, etc.).   Lemon law processes don't require you sit outside the dealer on weekends with large signs making a fool of yourself.  In fact, while you might find some sort of cathartic release from this, it really works against your own interests, as it allows the dealer and manufacturer to rightly paint you as an unreasonable person.   Who in their right mind wastes a perfectly good weekend doing stupid stuff like protesting a car dealer?

(By the way, the "lemon" car they bought back from him was serviced and then re-sold to someone else as a used car.  Despite what some people say, there is no such thing as an unfixable car.   Cars are not haunted by ghosts!)

Sadly, this sort of behavior extends to all walks of life.  While getting our replacement GoPhones at the AT&T store (they asked us to stop using our Motorola phones, as they were slowing down the network), a young man and his wife came in all fuming over their new iPhones.  It seems there wasn't very good service in the trailer park where they lived and they wanted their money back.   But as the salesman explained, all sales are final, and cell service levels are not an excuse to duck out of a contract that has been carefully crafted by devious lawyers.

The real issue, of course, wasn't cell service levels.  The real issue was that he was paying $175 a month for two smart phones and realized that having a smart phone wasn't as great as he thought it was, and moreover, his limited income could be spent in better ways - like putting a muffler on the clapped-out truck he drove in.   Buyer's remorse, once again.

We all suffer from this to some extent.   We have a nagging feeling we paid too much for a product - often a product we bought out of pride, to show off, and only later realizing that we've signed ourselves up for five years of onerous payments.   The young man buys a shiny new car based on emotions, and only later realizes that the cost of insurance is literally bankrupting him. So it must be the car's fault, right?

The easiest and best way to avoid this trap is to own less crap and desire less crap.   You can't be angry about a product you bought being "defective" if you don't buy it.   But of course, we all need some crap in our lives - a car, a computer, a cell phone (or do we?).   One way to minimize discontent is to buy a cheaper model or the least product you need.

I am never unhappy with our Casita camper as we paid $8500 for it, and it is 16 years old (and has given us a decade of good service).    I can't complain about our cheap Japanese pickup truck, as it cost only about $25,000 - compared to the $45,000 people are paying these days for an F-150.   It may have its flaws, but it didn't cost much, so I tend to overlook them more.  When you feel you got a screaming bargain, you complain less about small problems.

When you pay top dollar for "top of the line" vehicles, you tend to get disappointed when they don't live up to their overblown reputations.  And the same is true for any other piece of equipment, or even service.   My friend who spent $2000 on his MacBook is all pissed off when the hard drive crashes.   For $2000, these shouldn't break!   My used Toshiba ($155 on eBay) on the other hand is pretty reliable.   Well, when it isn't, I am not so upset, as I paid nothing for it (and parts are cheap on eBay).   My satisfaction with the product is so much higher, as my expectations are so much lower.

And this is true in any product ranges as well.  My "lemon" friend with the Chevy and Volkswagen bought cheap cars, it is true.  But at the time, he was pretty poor, and could ill-afford to buy a brand-new car - even a cheap one.   So his expectations were higher, and he was disappointed when a cheap car turned out to be cheap (and the cost of ownership was higher than he had expected).

This rule applies even to trivial things.  You buy a cup of coffee at a gas station and it tastes like brown water.  You don't go back and complain, as you paid 99 cents for it.   But if the "barista" at Starbucks screws up your Mocha-double-tall-latte with half decaf and half 2% foam, you scream his bloody head off.  You have higher expectations and they rarely are met.   The best bet, of course, it to find something in-between - a decent cup of coffee that isn't too fancy, at a good price.  Or decide you don't need coffee that badly, which is probably the best choice.   You can't be disappointed if you don't buy.

But when things don't work out in life, don't be that guy with the signs on his car, "protesting" the car dealership.    Avoid the problem by buying less stuff than you think you need - and avoiding status purchases entirely.   And if something really is wrong (as opposed to made-up, inflated, or exaggerated problems - and honest with yourself here) document everything and take it to the service manager and ask to escalate the issue to a zone manager.  If the problem is chronic and real, then investigate invoking the lemon laws in your jurisdiction.
But painting lemons on the car?  Probably a bad choice,.