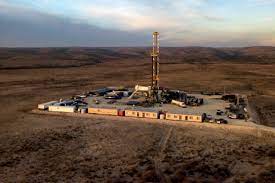 Here in the wilds of North Dakota, the fracking boom has taken off.  It is a pretty amazing thing to see - all these oil pumps running and oil trucks racing down the road, not to mention the huge flames of the waste gas burning off at night.  It is like being in Saudi Arabia.  The rolling fields of brown wheat look like sand dunes, to complete the effect.

It is interesting to come here, and visit Theodore Roosevelt National Park, as I just got done reading Gore Vidal's Empire and James Bradley's Empire Cruise, the latter of which was on sale at the Dollar Tree for a dollar (of course) which tells you a lot about that book.  A real shame, too as Bradley's Flags of Our Fathers and Flyboys were both good reads.   Sadly, Empire Cruise relies too heavily on revisionist history - namely that Roosevelt was some sort of Aryan racist (which may or may not be true) and that was his sole motivation for expansion in Asia.   It was, however, a chilling reminder of the horrors of the Philippine occupation - where America began its love affair with waterboarding.  But I digress.

Teddy was a skinny, somewhat effeminate, asthmatic lad, and he came west to experience "The Strenuous Life" and then write about it and become famous as a (part-time) rancher and later a "rough rider" - a term he swiped from the Wild Bill Hickok rodeo show.  It must have been strenuous inheriting $12 million at age 12 and also riding all that way from New York in your private Pullman coach.  But again, I digress.

(Being a part-time rancher, or oilman, however, has been a popular sport amongst Presidents who want to shed their images as a "wimp" or elitist.   Ronald Reagan and both George Bushes relied upon "clearing brush" photo ops to enhance their images.   Roosevelt, who had a tennis court built at the White House, was famous for saying that he made sure always to be photographed on a horse or carrying a gun, but never with a tennis racket.   Something John Kerry should have realized when he went wind-surfing).

North Dakota is a beautiful and wild place still, and it is still a place where machismo rules.   And with the advent of the fracking boom, well, the place has taken off.  RV parks popped up everywhere, and many folks are living in them, or staying in hastily constructed modular hotels - some made from shipping containers.  The big crew-cab 4x4 pickup rules the road here - and for good reason.  Unlike the suburban folks who buy these rigs to overcompensate for lack of penis size, here they are actually driven off-road, haul loads (or trailers) and have "crews" in their crew cabs.  The big pickup is in its element here, and is actually functional.

It certainly has been good for the pickup truck business.   And RV business.  And all the supporting businesses, from the rowdy roadhouses to the skanky prostitutes hawking their wares in front of recently constructed motels.  New restaurants are springing up everywhere, often in modular units.   We did not try the fare at the "Bakken Buffet" (I kid you not) but a lot of other folks were.  The dusty, muddy pickups lined the parking lot.

Everything is so new, than a GPS is basically useless.  New stores, new gas stations, new roads - everything is so new that the database is outdated the moment they update it.   And a lot of people are making and spending a lot of money around here.  It is hard to imagine what these places looked like when ranching and farming was the only game in town.

And that is the sad part.    The bloom is already off the rose on fracking, at least for the time being.  With sanctions against Iran lifted, the worldwide oil glut appears poised to get worse.  $50 a barrel oil is here to stay - or perhaps far less.   The local Halliburton yard is full of idled drilling rigs, and while we saw an awful lot of pumping going on, we saw very little drilling.   Of the literally thousands of pumping sites we have seen (and we have seen only a fraction of what is going on) we've seen maybe two drilling sites.  And a number of pumping sites are idle.

Of course, there are still jobs.  Tanker truck drivers haul the oil from the fracking sites to the rail heads or pipeline terminals.  They drive back and forth all day long, retractable truck and trailer axles up when empty, down when full, putting 24-30 tires on the road with a full load (and sometimes a tandem trailer to boot).  Still nothing like the monster rigs in Northern Michigan (which have ten axles or more!) but pretty impressive nevertheless.

But even those jobs may be waning, as we saw pipes being run from site to site to accumulate oil.    Nevertheless, "Help Wanted" is still a popular sign around these parts.  The local gun shop/convenience store/gas station laments their gun shop hours are only 9-7 Mon-Sat as they don't have enough help to stay open longer.   Hard to believe people complain about being unemployed when less than a day's drive away, jobs are going unfilled!

Of course, like any boomtown, it is hard to live here.   The local modular motel wants $400 a week to stay, so that big paycheck gets eaten up pretty quickly.   Nevertheless, a lot of young bucks are striking it rich - or so they think, anyway, which is what brings us to the point of this posting.

I will leave it to others to discuss oil policy or environmental policy related to fracking.   Those issues have been well-documented.   What fascinates me is the frontier mentality going on out here.  It is like the gold rush in 1849.    A lot of people have come here to strike it rich, and they are, but are spending it faster than they are making it.    A young oil worker, when he gets his first paycheck, runs out to the Dodge dealer and buys a big Ram pickup (because the other workers laughed at his Camry).   And since he thinks this job will last a lifetime, he puts it all "on time".

Worse yet, many are settling down and buying homes, either modular, double-wide, or even stick-built.  Suburbs are springing up near some small cities, which are growing at an exponential rate.   And of course, everyone has to have a party barge, jet skis, or a new Sea Ray (to drive around the Missouri River - this is a land of water, ironically).   And again, it is all paid for "on time" based on the assumption that people will always be willing to pay $100,000 a year for unskilled labor.

But as we are seeing, the oil industry can be fickle.   We've seen booms and busts in the oil business for decades, as the price of oil peaks and valleys.   My seatmate on an United flight back in the early 1990's related to me how he just returned from Oklahoma, to bury his brother.   After the oil business peaked and crashed there, a lot of roughnecks were out of work - and many resorted to crime to stay afloat.  His brother was the victim of a home invasion, and was shot for his pickup truck.   That sort of thing hasn't happened - yet - here in North Dakota, as the oil glut is only a few months old (ironically, gas prices are very high here.  They claim it is because refineries are off-line, but I suspect the real reason is they can gouge these young roughnecks for every penny and they don't really care).

We've seen a few modular hotels already shuttered.  A new mini-mall site sits abandoned, up for sale.  A lot of dreams are starting to crash.  If oil stays low, a lot of dreams could turn into real nightmares.

We are off next to Alberta, the home of the oil sands projects.   It is the same sort of deal going down there, but with more dire environmental consequences.  By the way, we get most of our oil from Canada.  Most folks think we rely on the Middle East for oil.  We don't.  Europe and Asia does - which begs the question as to why we get into such trouble over there, to protect the oil supply of our competitors.  But again, I digress.

The sad thing for Canada, is that their economy is propped up by raping their own natural resources and then selling them for cheap to the United States, in order to keep their quasi-socialist economy running.  We long ago gave up on our longstanding dream of invading and conquering Canada - it is already a fait accompli at this point.   We take everything we want from Canada, and leave to them the messy business of governing their tiny populace.

But getting back to the point, this is a pretty crazy place up here - the last bit of the wild-west mining boomtown left in America.  There are opportunities up here galore - at least in the short-term.   If you decide to get a job in this boom market, just remember it is a boom market.  Once all the wells are drilled, the number of jobs will drop off precipitously.  And if the price of oil stays low, the whole thing could be mothballed in short order.   Don't spend the money like it will be around forever.

Come to think of it, that is pretty good advice for any job.....
Newer Post Older Post Home