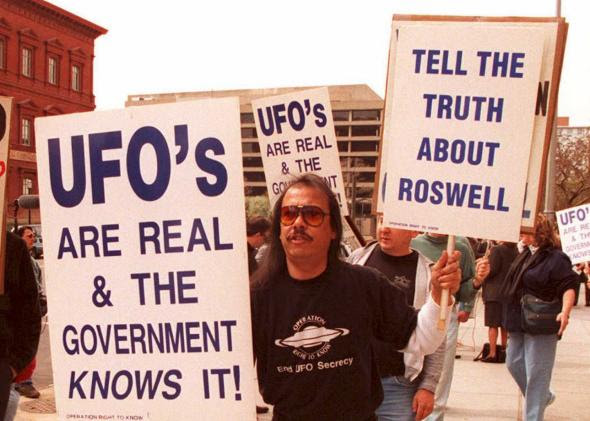 People who are losers in life tend to spend a lot of time and energy on conspiracy theories, urban legends, and belief - at the expense of reasoning, rationality, and analysis.  As a result, they tend to be unhappy people who fall down the economic ladder.


In an earlier posting, I noted that "Mental Hygiene is like Physical Hygiene - you have to work at it!"  And by this I meant that it is possible to drive yourself crazy by indulging in weak thinking.  Of course, this becomes one of those correlation/causation issues.   Does believing in crazy bullshit make you crazy, or does being crazy make you believe in crazy bullshit?

I think it is a matter of both answers being right.   Full-on batshit crazy people will believe in and propagate conspiracy theories, such as this poor fellow who killed himself last week after writing a dozen tomes attacking the Clintons, denying the holocaust, and claiming 9-11 was an inside job.   Clearly he was an unhappy person, but was that what drove him to far-right hate-speech, or did indulging in such theories drive him to be unhappy?   You decide.

But on a more mundane day-to-day level for the rest of us, I think the tendency to want to indulge in weak thinking can indeed drive you a bit batty and also cause you to fall down the economic ladder.

The other day, a friend of mine told me this story, which is a hoary old Urban Legend that has been long debunked on Snopes:

"A couple of guys from New York City came up here once to go deer hunting.  Those city folks are so dumb that they shot what they thought was a deer and then tied it to the fender of their car.   Only later on when they were stopped by the game warden did they find out they had show a farmer's cow!  Haw-haw!"

I smiled nicely and changed the subject.  Did my friend really believe this story or was he just baiting me?  After all, it is so easy to debunk.   Even if you are a "city slicker" you no doubt saw the movie Bambi and know what a deer looks like.  Even in the suburbs, you see deer.  They are quite common.   You may have seen pictures of one in a book.   It is hard to imagine someone not knowing what a deer looks like, and yet at the same time wanting to go hunting.

Moreover, of course, a cow can weigh hundreds of pounds - over 1,000 in some instances - and it would be hard to lift or carry a dead cow without a crane or forklift.   And people stopped strapping deer to the hood of their cars years ago (now that we all drive pickup trucks).   And a cow would crush the fender of a modern car - and obscure all forward vision as well.   The story is more than improbable - it is impossible.

But the telling of the story is telling.   What the real message is, is one of lack of empowerment.   Those "city folks" with their six-figure salaries, fancy foreign cars, and expensive loafers are not smarter than us "country folks" but rather just plain idiots.   It is a way for people who are unempowered to feel better about themselves by running down folks who clearly are more successful than they are.   Those city folks may have lots of money, but when the economy breaks down, we country boys will survive by hunting deer!  Yesirree!

I guess it is harmless fun and a way of mentally making yourself feel better about your station in life.  Maybe so, but it also is harmful in that it allows you to indulge in weak thinking.   When you posit that your disadvantages in life are actually advantages then there is little reason to change your station in life, is there?

When I was younger and poorer and working as a technician, I engaged in such thinking - as did many of my peers.   Folks who made money, did well, got an education, got good jobs, well, they were "sell outs to the man" or whatever.   Not only was being poor and stoned all the time not so bad, it was actually better as we were morally superior to richer folks for some obscure reason I can't remember right now.

The irony is, of course, that the real stories about deer hunting mostly paint the "redneck" in a bad light, and that is mostly because "city slickers" have little interest in leaving the city to go shoot deer.  On our little island, some local fellows decided to go hunting, but failed to shoot any cows:

On 01/08/2013 at about 11:00pm, the State Patrol received a call about shots fired at the soccer complex on Jekyll Island and sent a Trooper to investigate. The trooper saw a vehicle in the area driving erratically. When he stopped the truck he immediately noticed several dead deer in the back of the truck. He then called RFC John Evans and Sgt. Chris Hodge to the scene to investigate the incident. After the investigation the driver and passenger were charged with hunting deer at night, hunting from a vehicle, and hunting from a public road. The driver was also charged by the trooper for driving on a suspended license and driving under the influence. The passenger was a convicted felon and was charged with possession of a firearm by a convicted felon. Both suspects were taken and booked into the Glynn County detention center. They had killed a total of 5 deer. The deer were turned over to a local processor who was willing to come out and clean them and then turn the meat over to a local food bank.

Sadly for these "country boys" hunting is not allowed in a State Park, and certainly taking five deer is more than the limit.  Unfortunately, this is not the only such incident to occur on our island.

But getting back to urban legends and conspiracy theories, are they really harmful to your mental health?  Well, yes, they are.  I think once you go down the rabbit-hole of weak thinking and indulge in more and more in belief and not reason, the world becomes distorted.   Since your world-view is constantly skewed with regard to the real-world, you tend to indulge in more and more bizarre beliefs in order to square things up.  The reason the Federal Reserve is controlling your life is, well, Aliens, right?

It may start out as a simple urban legend, or even some religious belief, but it can quickly devolve into some sort of scary world conspiracy in short order.   After all, if one urban legend conflicts with reality, the only plausible explanation is that some even greater conspiracy is afoot to suppress the truth.

And I think this is how conspiracy nutters end up where they do - encompassing everything from Holocaust denial to aliens in area 51 to whatever, into one grand "Illuminati" scheme of one sort or another.  If someone points out the flaws in your thinking, well, they must be part of the conspiracy, too!

(And to all you conspiracy nutters, as I have freely admitted before, I am part of the conspiracy as well - the Illuminati, the inside circle, and so forth.  Buhaawahaha!)

Of course, that brings the question:  If there is some sort of "insider" Illuminati who are running everything and whatnot, why not simply join them and share in the riches of this grand scheme?   Well, it is possible to do so, of course, simply by engaging in real society.   You see, if there is an "secret inside" cabal of people running the world, it really isn't all that secret.  All you have to do to join is to get an education, get a good job, work hard, and put away some money.  Bingo!  You're in the Illuminati!

And it is a very egalitarian system, too.  Anyone can join, but how far you advance is based on your native intelligence and how hard you are willing to work.   Step 1 to membership is just denouncing conspiracy theories, weak thinking, urban legends, belief and other nonsense and instead engage in rationality, clear thinking and believing in yourself.

But you see how this works to the paranoid conspiracy theorist.   Since they refuse to engage in rational society, they feel they are being "excluded" by an inside cabal when in fact they are simply excluding themselves from society in general.

But beyond whack-job conspiracy theorists, the same theory also applies.  If you are protesting for Bernie and think that your student loans should be "forgiven" or that college should be free, maybe you are not living in a rational, real world.   Not only are these things not likely to happen, they aren't going to improve your lot in life.   If you let your student loans go into default, it will seriously harm your financial record, make it hard to get a job or an apartment or anything you may want out of life.   Blaming your student loans on someone else might make you feel good (just as the hunter/cow story makes folks feel better about themselves) but it does little to make your own life really better.   In fact, it makes it far worse.

Or if you think electing Trump is going to get you a good paying job when they "throw out all those Mexicans and Arabs" maybe you need to think again, unless you think a job as a day-laborer or landscaper is a "good paying job".   And all those tech jobs are not going to come your way without a tech degree.  Companies hire H8 visa techs simply because not enough Americans want to bother getting the proper education to take such jobs.   Xenophobia isn't going to get you a six-figure job.   And when Donald Trump collapses the economy, well what job you have today will likely go away.

And so on down the line.  Indulging in weak thinking rarely amounts to much.