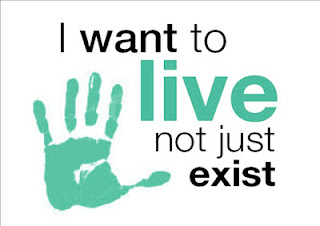 Just existing is OK, I guess, but life should be more than merely eating and excreting, over and over again.

One interesting phenomena we see while traveling by RV are people who are living in RVs but doing little more than existing.  They're not exploring new places or having new experiences but rather just traveling from place to place and sitting inside their recreational vehicles and watching Fox News.

For example, we met a couple in Anchorage Alaska who are work camping.  Work camping is an interesting way to make a little extra money while you were traveling by RV.  Unfortunately, that usually means you have to stay at one park for several weeks or even months at a time, cleaning bathrooms two or three days a week, or doing other menial chores.  In return for this, you may get a free place to stay, or even make a small wage.

We asked this fellow, after he had spent nearly three months in Alaska, whether he had any tips about places we should go or see.  He gave us a blank stare.  He hadn't left his RV since he arrived, other than to go to Walmart to buy groceries.  Other than sitting in the RV watching television and hanging out with his wife, he hadn't done anything that could be considered "touristy."

Part of the reason is that some of these activities cost a lot of money.  If you want to get on the train and take it up the valley to the glaciers and go on a nature hike, this can cost a few hundred dollars.  If you want to fly in a helicopter to Denali, this can cost several hundred dollars.  But there are other things you can do, such as take local hikes to mountains or hiking trails, that cost little or nothing. But many people refuse to do even this.

Part of it is the inability to do things.  Many older people lose their faculties and can no longer walk long distances or do strenuous activities.  But also it is fear that is involved.  Fear of the unknown, fear of the uncertain.  And of course fear of new things.

It is all too easy to wallow in your comfort zone and not do things, particularly when you are traveling.  And we see this in many other venues.  For example, we have friends who like to go on cruises to faraway locations.  However, they never leave the cruise ship even as they arrive at these exotic ports.  They argue that these trips ashore could be dangerous and are overpriced and are not all that interesting.
They also argue that if you stay on the ship, there are fewer people there and the experience is more enjoyable.  However, just sitting on a cruise ship for 7 to 10 days is really no different than just staying in a nice hotel.  For a lot less money, you can fly down to Miami and stay the nice hotel on the beach and have largely the same experience without having to leave the country.

I realize that it is hard to do things and to try new experiences.  And as we get older, this gets harder and harder to do.  You have to make a concerted effort to get out and do things rather than just stay home in your comfort cocoon.  Faith Popcorn, the futurist, predicted that in the future cocooning would become a trend.  She predicted - quite accurately - that we would become more home-centric and be less willing to try new things, but instead stay in our homes watching our cable TV or Internet and sending out for pizza or food kits.

Of course Faith Popcorn is the classic example of the stopped clock being right twice a day.  She predicted a lot of other things that never came true but we tend to remember the things she said that did.  But I think she was prescient in her prediction.  We do seem to be more in a mode of hunkering down in our homes and avoiding interacting with other people.
Not only are we afraid of violence in the streets, we are afraid of interacting with people whose political opinions are different than ours - and whose political opinions often devolve into violence, particularly these days.  It's a lot easier to just sit at home and watch the television channel whose pontifications agree with our preconceived worldviews.

Fear is never an emotion to be trusted, as I have noted before.   Fear drives us to do things that are often antagonistic to our best interest.  Fear can stampede the herd off a cliff to their death.  Fear prevents us from taking advantage of opportunities presented to us.

It is hard work to overcome fear.  It is hard work to seek out new experiences and new ideas.  It is difficult to accept things that are foreign to us or even to interact with people who are foreign to us in language, manner, religion, or color.  However in the long run, it is worthwhile to seek out these new experiences and overcome fear, rather than to hunker down and experience the same things over and over again - monotonous and boring.
Newer Post Older Post Home