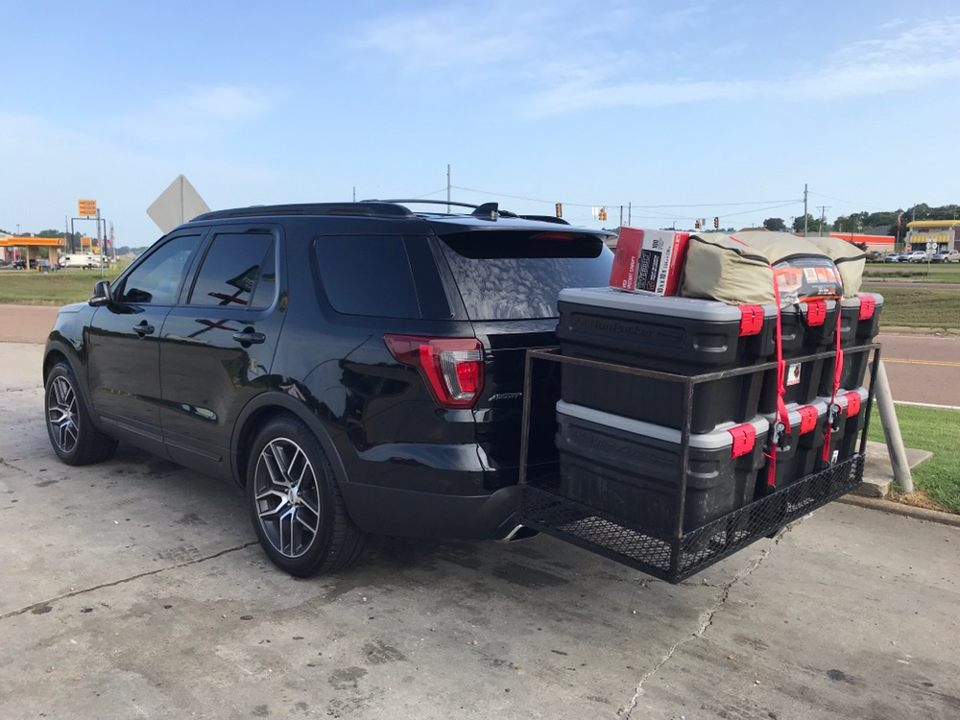 Putting a lot of weight at the very end of your vehicle is usually a bad idea.


When traveling we see a lot of people try to create extra cargo room by putting one of these hitch cargo carriers on the back of their car, truck, or SUV.  In some instances, the weight of the cargo and the carrier is such that the front of the vehicle is pointed skyward, and the  headlights are blinding oncoming cars.

Are these a good idea or not?  Well, the problem is, when you put such weight so far behind the rear wheels, it acts as a lever, and reduces the weight on the front wheels.  A condition called understeer can exist, where you turn the steering wheel and nothing happens - or very little, anyway.  On dry pavement, maybe you can get away with this - the adhesion of the rubber on the tires will still provide some grip.  But on wet, snowy, or icy pavement, the increased understeer could mean you lose control of the vehicle.

Some folks put these on the back of motorhomes and trailers.  For a motorhome, the weight of the vehicle is such that unless you are loading 1,000 lbs back there (and we've seen it - with motorcycles and such) it isn't going to affect the steering too much, depending on the load and the size of the vehicle.  A motorcycle hanging off the back of a Prevost might not be noticeable.  On the back of a 23-foot Class-C, it could be a white knuckle nightmare.

On a trailer, it is a different story.  I related before how we put a bike rack on the back of our first trailer - an 18' Prowler.  The lashup was never good to begin with - for some reason, Toyotas make lousy tow vehicles.   When we added the bike rack and bikes, it went from white-knuckle driving to nearly wiping out - sway induced by poor trailer balance.   You need at least 10-15% of the trailer weight on the tongue of the trailer.  Any less and the trailer is "tail-happy" and will sway out of control.  It is not controllable, either, just as a tail-happy airplane is doomed to crash.   You cannot counteract the sway, and in fact, whatever you try to do to stop it, usually makes it worse   It is a dynamically unstable system.

And yet we see people with these racks, loaded up with coolers and what not, swaying down the highway, the first strong breeze, passing truck, or rainstorm ready to put them upside-down on the side of the road.

Now, knowing all that, you would think I would know better than to put something on the back of our trailer.  But Mark wants to stay at some "Harvest Hosts" en route this summer - wineries, breweries, museums, and farms which allow you to stay overnight for free.   The caveat being there are no hookups and no electricity, so if it goes up to 90 degrees, you will suffer.  No problem, bring our old Honda EU2000i generator, which will run the air conditioner (soft start) but not much else.  In fact, nothing else.    But where to put it?

The Escape people put a class-III load receiver on the rear bumper of the trailer - this is just inviting trouble!  The hitch has a label on it "Capacity 150 lbs."   Now, you know a Class-III load receiver is generally rated for 5000 lbs towing capacity and 500 lbs hitch weight (or so - real capacity is determined by the vehicle).   So clearly the hitch itself could carry more weight, but they don't want you putting that kind of weight on there as it would make the trailer unstable.

The Escape 21' weighs about 5,000 lbs, which means we need to have at about 500 lbs on the tongue of the trailer.  As you can see, even 150 lbs on the other end of the trailer could reduce this to well below 10%, assuming the weights are evenly positioned around the axles.  Most trailers today, however, are designed with the axles further aft, to insure that more weight is on the tongue.  I assume the Escape people did the math on this and realized 150 lbs is about the max you want to hang out on the end of the trailer.  Let's hope, anyway.

So, against my better judgement, we set out to do this.  The Honda generator weighs about 45 lbs, so any carrier and enclosure has to weigh less than that.    We visit Lowes, and they have a six-foot-wide all-steel "cargo carrier" that I cannot even lift.  It must weigh 100 lbs easily, just by itself.  Already, I realize why people are driving around with these like they are doing wheelies - the rack alone weighs a ton!

But we find, at Harbor Freight, an aluminum rack that is 42" wide and I can lift it with one hand.  It weighs only 31 pounds and moreover, is the least expensive option at under $70 with their online coupon deal (I hate these - one reason I never buy anything at Harbor Freight is that I feel I am being ripped-off unless I shop with a coupon!  Just put real prices on things - sheesh!).   So far, we are up to 76 pounds.

If we leave the generator on the back of this rack, it will likely be stolen, and also exposed to the elements.  Some people make generator enclosures, but they cost more than the generator, in some instances.  We found this diamond-tread aluminum truck tool box at Lowes.  Kinda pricey, but good looking.  We cut out 12" x 10" holes in the back and riveted air conditioning vents (painted black to match) over the holes.  I added a 12" electric radiator fan to circulate air and keep it cool,  The fan will run off the generator's 12V output, which I don't normally use, and this way it will run whenever the generator is on.  A local welding shop welded on a 1/2" nipple to the exhaust, and with some galvanized pipe and a Briggs & Stratton lawnmower muffler, the exhaust vents outside the box, through a hole made by my hole saw.

Why do we need all these vents in the box?  Seems moronic to buy a box and then cut huge holes in it.  But the deal is, you can blow yourself up - or blow up your generator - if it is not vented properly.  The tool box came with a sticker saying, "Do not put cans of gasoline or gasoline-powered tools in this box!" and if you think about it, you can see why.  From the factory, the box is watertight - nearly air-tight in fact (a smother hazard for children).  If you put a can of gas in there and left it in the hot sun, the gas vapors could leak out and fill the tool box - a perfect stoichiometric ratio of fuel and air.  You hit the latch to open the box, and it makes a spark to ignite this and.... Blammo! it goes off like a bomb.

The other problem is the generator is air-cooled, so if you don't have fresh air going into the box, it will overheat in short order and goodbye generator.  So two large vents and a fan are needed, at the very least, to keep things running smoothly.  Hopefully, it keeps out most of the rain, and the thieves.

It fits neatly on the aluminum rack and weights maybe 20 lbs, so we are well under the 150 lb limit on the hitch.  Of course, there is the matter of how far it sticks out, as even a small weight on a long moment arm can leverage the tongue of the trailer.  Spend some time at a child's playground on the see-saw and you'll see what I mean - a 50 lb child can leverage a 200 lb man, if the see-saw is adjusted properly.

We made a few other adjustments - adding a courtesy outlet to the box as well as a stick-on LED light inside.  I also bought some stove-top firestop fire suppression canisters to mount inside (found cheaply on eBay), "just in case".

So hopefully this will work.  I also put a cord out the side with the requisite threaded RV coupler, which connects to the main power supply port on the trailer - which is helpfully located on the rear of the trailer, near all of this.  All told, the whole deal probably cost close to $500, but less than what some others want for factory-made boxes.

The key, of course, is whether it destabilizes the trailer at all.  If it induces even the slightest amount of sway, it gets tosssed.   I am not going through that again!

So, are these cargo racks a bad idea?   They certainly can be, and what I see going down I-95 is certainly scary enough.  The key is the weight.   These heavy steel racks that are six-feet long are heavy enough - and encourage you to load more and more stuff on them.  I see people putting coolers on these, the size of a child's coffin.   Ice and beer - at 8 lbs per gallon - you could be talking about hundreds of pounds of weight at the most inopportune location.   Worse yet, some people put a "stinger" hitch extension on these, so they can open their van doors or pickup truck tailgate.   This creates additional leverage to the point the front wheels are touching the ground only every third revoltion!

If the front end of your car is pointing to the sky when you get done loading one of these, something isn't right.

It is pretty easy to overload a vehicle by putting weight on the very end.

I would stick to the smallest and lightest rack, and put something lightweight on it, rather than a heavy object.  You want to move pillows?  Good idea.  Bricks?  Probably not.

There are, of course, other options.  You can use a roof rack and a roof box - which are not cheap, either.  Most roof racks are rated only for 300 lbs or so, probably to prevent the vehicle from becoming too top-heavy and rolling over.

The ultimate option, of course, is just to have less stuff to haul around!

Oddly enough, in the early days of the automobile, cars did not have trunks. Instead, many had a luggage rack which would fold down in the back which a steamer trunk or even a custom trunk (such as on this Duesenberg) could be lashed to. A hundred years later we've gone back to the same thing!


UPDATE: A reader notes that in the illustration above, you can't see the license plate.   This is probable cause to be pulled over and possibly ticketed.  Some of the fancier carriers have licence plate brackets and even auxiliary taillights.   For someone who has a "mobility scooter" permanently attached to their car, this may be a good idea.  Sadly, those sorts of contraptions are usually the ones driving around nose-high, overloaded.

In general, I think these cargo racks can be a really bad idea.  If you do get one, go aluminum and keep an eye on the weight!

UPDATE:  We have nearly completed our generator enclosure.  We are going to add some more vents and maybe a second fan.   But it seems to work well and doesn't affect the handling of the trailer.  All set for summer!

UPDATE:  Oddly enough, after going to all that effort, we ended up using the generator only once or twice - usually to cool the trailer while we were shopping in WalMart (a Honda eu2000 will just barely run the air conditioner and nothing else).  We may leave it behind this summer.  We'll see.
Newer Post Older Post Home
View mobile version