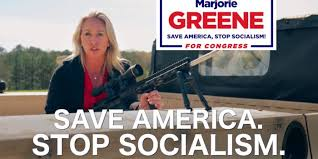 The same State that brought you Ralph Warnock, Joel Osshoff, and Joe Biden, gives you Margie Green. What's up with that?

People like to talk about "Red States" and "Blue States" but they don't know what they are talking about.  Maybe because of the electoral college, it is a winner-take-all in every State for Presidential elections, but maybe less so for the Senate, and not at all for the House of Representatives.

Growing up in Central New York, we were acutely aware of the dichotomy between New York City and the other New York, New York State.   Folks in the State are different from "City Folks" and the two don't always get along and tend to view each other with mistrust.  What is considered important and essential to city dwellers leaves the State residents scratching their heads.

New Yorkers (in the City sense) talk about "upstate" meaning anything within an hour drive North of Manhattan.  Basically, Westchester County, where Mark was born and where Ms. AOC grew up.  I was born in the other "Chester" - Ro-chester - and never the 'twain shall meet.   There are the Hamptons, on Long Island, and then there are the Bing-Hamptons, where David Sedaris was born.  Again, never the 'twain shall meet.  They are entirely different worlds.

Between Utica and Buffalo, there are a lot of "red" counties, and many elect Republicans to the State legislature, and to the US House of Representatives.   In fact, a closely called election was recently conceded by the Democratic candidate amid charges of election fraud - or at least election incompetence.  In a "Blue State" there are now eight Republican House members and 19 Democrats.  It isn't as homogeneous as the term "Blue State" implies. In fact, in the "Southern Tier" (our little slice of Appalachia that extends from Elmira to Buffalo) and the "North Country" (which is technically part of Canada), Trump flags are quite common.

It is doubtful that New York State will flip to Red anytime soon, although New York City dwellers have been known to elect Republican mayors from time to time.  And who knows, with the mass-exodus of educated left-leaning voters (including yours truly) the State may devolve into a low-income redneck State, which in turn may attract businesses back - maybe in 50 years.

And where are all these people from "Up North" going?  Bear in mind that when I was born - not long ago - the majority of the population of the United States was wedged into the Northeast corridor.  Manufacturing was limited to the Northeast and Midwest.  The term "sunbelt" was unknown to anyone, places like Denver and Phoenix were sleepy little towns, and the South largely underpopulated and agrarian.  All that has changed, in my lifetime.

I lived through the change in Virginia, as "Northern Virginia" out-populated the rest of the State.  Places like Fairfax County have a population greater than Vermont.   Virginia went from "Red State" to "Purple State" to what is probably now a reliable "Blue State" from now on, unless the Democrats really screw things up, as historically, they tend to do.

Georgia is going through the same throes.   Like with New York, there is the State of Georgia, and then there is Atlanta.   Atlanta is our New York City and what goes on there is not reflective of the rest of the State.  But the population of the greater Atlanta area is enough to swing elections for national offices.  But even outlying areas are turning blue-ish.  Savannah, Athens, Albany (yes, we have one as well), Augusta, and the 100 miles of Georgia coastline, are attracting retirees from "up North" as well as better-educated natives.

But get outside of these urban centers of sophistication and it gets more primitive than the North Country of New York State. We still have dry counties, and there are counties where it is understood that Blacks are not welcome.   In many of these very rural areas, the level of education is pretty low as are expectations in life.  These are the sort of districts that vote Republican reliably.

They vote Republican, but not necessarily Qanonsense Republican.  So how does this explain our Miss Margie?  Well, in the district she ran in (which was not where she lived) she didn't win a majority in the primary election and thus was forced into a runoff election - which are usually sparsely attended except by the more extreme elements of the party. In the general election, the Democratic candidate dropped out of the race before the election.  So her election to office is hardly a ringing endorsement by the voters of that district.

Kind of hard to lose an election when you running un-opposed!

Georgia, as I noted before has two odd voting laws which are unique from many other States.  First, we have open primaries, which means anyone can vote in the primary, regardless of party affiliations.  As I noted before, voting in the Democratic primary is usually pointless - there is only one person running for each nomination and in many cases, no one is running for some seats.  Such is the pathetic state of affairs for Democrats in Georgia.   But in any election, a winner has to win 50.1% of the vote, and if no one wins a majority (i.e., a three-way race) there is a runoff election.

In a way it is a good system - it brought us Warnock and Osshoff - but only because the runoff election was held a day before the Electoral College was to certify Biden's win.  If Trump had not contested the election and spread lies about voter fraud, odds are a lot of voters would have stayed home.   Thus, in a way it is a bad system - Miss Margie won only because of the runoff election, which was not well attended, unlike the runoff for Osshoff and Warnock.   Asking people to vote two or three times for a candidate (possibly four - primary, primary runoff, general, general runoff) creates voter fatigue and only the most motivated (i.e., extreme) will turn out.  That is, unless there are special circumstances, like a two-month-long nightmare that Trump created.

It is ironic - Trump not only lost the election because of his idiotic rantings, but he lost the Senate as well.  If he had conceded shortly after November 3rd, the GOP would probably be controlling the Senate today.  Lunatic!

So is Georgia a "Blue State" now?  Hardly.  I suspect it will go the way of Virginia, see-sawing between Republican and Democratic, as each party mobilizes to recover from a previous defeat.  As many have noted, the GOP has relied upon gerrymandering and our unique methods of voting in America, to maintain power in situations where they don't represent a majority of voters.  Even though the Senate is split 50/50, the GOP Senators represent only 40% of the population.   Northern Virginia may have a population greater than Vermont, but Vermont gets two Senators the same as the entire Commonwealth of Virginia. There are a lot of low-population States in the middle of America that are strongly Republican - they get two votes each, in the Senate.

So it is too early to write the epitaph of the Republican Party.  The Democrats are wisely capitalizing on this Qanonsense and are going to label the GOP with it, much as the GOP has tried to tag the Democrats as the party of Antifarts (which is a bit of a stretch).   The problem for the GOP is that they are standing by Trump, who in turn has stood by the Qanonsense.  The GOP is so afraid of losing any support that they are going to lose a lot of urban voters.  You lose Atlanta, and you probably will lose Georgia, unless you can suppress the vote in the urban areas (check) and have a series of runoff elections (double-check).

This same trend, however, is taking place across the South. Even Texas is bifurcating into its urban and rural areas.  What is true in Austin isn't necessary going to sell in Kerrville.  They key will be the suburban "Swing" voters who are going to vote on economic issues more than on political ones.  If the economy is in the toilet in November of 2022, regardless of who is responsible, the Republicans could see some major gains.

On the other hand, if they let this Qanonsense go on too long, it could come back to haunt them.  No one wants to see the return of the KKK or the Nazi Party, at least no one outside of Qanonsense.  The swing voters will vote their pocketbooks, that is, unless they are concerned that one party is likely to put them in a concentration camp.

But of course, that could never happen here, right?  I would have agreed with that sentiment, before January 6th.