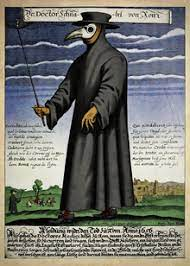 Plagues and Epidemics have always brought out the worst in human beings.

People are freaked out today, not because of the pandemic or mask requirements or because of vaccine passports.  Yes, a few people are losing their minds over those things, claiming their "free-dums" are being trampled upon.   But the vast majority of the world is freaking out over the freaks.  The rest of us play by the rules, wear masks, get vaccinated, go to work, and pay our taxes.  We look on in horror at these idiots who disrupt society and even engage in violence over.... nothing.

But I got to thinking that this is nothing new.  The world is full of crazy and stupid people.  It is just stress that brings out the worst in people, and the Internet that allows us all to see it, firsthand.  And this isn't the first time this has happened.  In fact, in nearly every epidemic, plague, pandemic, or whatever, people have basically lost their minds.

Now, granted, in the old days of the bubonic plague, you could understand why people might be superstitious.  After all, it seemed that people just started dying mysteriously. So they lashed out at witches or whatever - wanting someone to blame for their misfortune, even if the people being blamed were innocent.  It would take a long time before people understood how rats spread fleas, and fleas spread disease.  The ideas of bacteria, viruses, and inoculations were centuries in the future (although inoculations appeared before people even understood how they worked).

We saw the same thing as late as the 1800s in the old South, when the yellow fever struck.  No one knew what caused it - perhaps "vapours" from the swamps.  They were so close!  It was mosquitoes, of course, and draining swamps (or not living near stagnant water) was the real solution.  Instead, they shot off "Fever Cannons" to drive away the mysterious illness.  Yes, it was as stupid as using horse medicine.

But this same pattern emerges again and again, if you look throughout history at plagues and pandemics.  People revert to superstition, and often lash out at their neighbors and friends.  Human sacrifices were not uncommon - surely we somehow displeased the Gods, right?  And since every pandemic eventually peters out, the sacrifice seemed to "work" somehow.

Of course, back in those dark days, we didn't have the science we have today.  But even in the presence of science, people will ignore the results.  The Jekyll Island Club - winter home to the world's millionaires at the turn of the last century - had two episodes where members (or their spouses) died from typhoid fever.  The first time it occurred, the wealthy members of the club hired the best pathologist in America to find the source of the fever.  This expert noted that the club was dumping raw sewage into the Jekyll Creek, and at the same time, Club employees were harvesting oysters from near the sewage outlet - and serving them to the club members, raw.

The pathologist recommended that they stop eating those oysters and start treating the sewage or installing a septic system.   Of course, that would cost money.  Even though these folks represented one-sixth of the world's wealth and their own members were getting sick and dying, they refuted the suggestions of their own expert they hired. I mean, Republicans - why spend the money?  It was God's will they died, so be it.

Well, a decade later and another member's wife dies from typhoid from tainted oysters.  The whole thing is repeated all over again and once again, no action is taken, except perhaps not to eat the oysters or maybe steam them first (that probably doesn't help).  Maybe that is how Oysters Rockefeller were invented.  Just a guess.

Well, fast-forward a century and Mark and I drive our golf cart down to the boat ramp to see the sunset on nice days.  The boat ramp is downstream from the sewage treatment plant, which treats the sewage and then dumps the effluent in the creek.  And not surprisingly, the oysters are in abundance.  No one is eating them, though, even if the sewage is treated.

On the other hand, Joe Rogain hasn't visited here.  I am sure I could dare him to eat one or two!

But why does it even exist - in this era of science and technology? I have written about this before, and my theory is that superstition has expanded due to science and technology.  Few people today understand how any of this technology works.  They own cell phones that have more computing power than a Cray supercomputer did back in 1975.  As far as they know, it is all magick.  They feel helpless and like idiots and that they have no control over their lives - and what little control that had, they are losing.

But a conspiracy theory?  It is a chance for them to be in the know.  Now they are on top of things and have "done the research" (Googling things is not "research"!).  They are with a group of like-minded people who are ahead of the pack - not one of those "sheeple" who actually knows something.

The rest of us scratch our heads and wonder why anyone would follow these strange websites and conspiracy theorists.

But if you think about it, it makes perfect sense. Not the crazy theories, but that people believe in them.

It is simply plague superstition at work.