Ford has introduced a car that mimics the Tesla Model-X in many ways - except the Model-X's dismal quality.

First to market is last in the marketplace.  And this was driven home to me recently by an episode of Jay Leno's garage (the YouTube version, not the annoying Cable version with the goofy sound effects).  The Ford Mustang Mach-E is a technological tour-de-force that out-Tesla's Tesla in every respect.

Tesla has has a checkered history in terms of automotive quality.  Consumer Reports famously called the Model-S the "best car they ever tested!" but a year later, rated it "unacceptable" as continuous electrical problems made the car very unreliable - spending more time in the shop than on the road.

The Model-S and Model-3 have been fairly popular despite Consumer Reports' experience.  But the Model-X, Tesla's attempt at an SUV, has met with unanimous condemnation as being half-baked.  A big part of the problem is the ill-fated decision to make the rear doors as gull-wing doors.  They have lots of fit and finish problems, leakage problems, and despite the numerous sensors designed to protect the doors (and adjacent cars, lamp posts, etc.) they tend to open up in places they shouldn't - such as garages, where the doors slam into the ceiling with predictable results.   Even when they work properly, the gull-wing doors end up being impractical, as you can't exit the back seat if you are in a garage or other obstructions block the doors.

Ford avoided that problem by using conventional doors, and as they have more than a century of experience building cars, their interiors look more finished and the fit-and-finish are superior to the Tesla Model X.   Of course, the Mustang Mach-E has all the usual electric car features - 0-60 in 3 seconds or so, and a range of about 300 miles.

The problem for Tesla is that their monopoly in the marketplace is evaporating faster than spilled super-unleaded. When Tesla was the only game in town, they could sell their carbon credits to other carmakers.  Once those carmakers start selling their own electric cars, the market for those carbon credits might dry up.  And once other carmakers offer better quality cars at better prices - with more established networks of service centers and dealers, well, Tesla might find itself in a bit of a pickle.

Then there is Musk.  A lot of people who are what we used to call "limousine liberals" embraced Tesla as they thought Musk was  progressive and that driving a Tesla, like driving a Prius, was a method of virtue-signalling.   But it is, in a way, akin to how Hippies in the 1960's drove VW Beetles, which were poorly made Nazi deathtraps.  They thought driving a "bug" was a means of signalling their anti-establishment credentials - by sticking it to GM and the "Big Three."

Years later we realized (although many at the time realized it) that the VW Beetle was designed by a darling of the Third Reich and approved by Hitler himself.   It was a fascist car, to say the least.  And safety?  The reason Ralph Nader condemned the Corvair was because it copied all the bad features of the Beetle, particularly the swing-axle suspension.  Before he wrote Unsafe At Any Speed about the Corvair, he wrote Small on Safety about the VW.  No one read the latter book.  We endowed VW with an aura of hipness that was undeserved.

All that was swept under the rug as VW kept the Nazi-connection fairly quiet.  But Musk, on the other hand, seems to make a nuisance of himself, shooting his mouth off all the time.  I noted before that the Internet sort of has turned on him.  Sure, there are still legions of fanboys, but most of those are like Johnny-bots - fake, fake, fake.  Rich people hire companies to manage their image and manage damage control.  So it is not hard to conceive that Musk does likewise.

Problem is, despite the Musk-bots and fanboys, it is becoming readily apparent that Musk was no great inventor with a grand vision of the future, but an opportunist investor who is more interested in leveraging his wealth through strategic acquisitions than in any grand vision of colonies on Mars or solar-powered home power modules charging electric cars.  To him, it is all about money, period, and if that means posing as a Leftist, he will do so.

But is increasingly apparent he is far from a card-carrying commie.  He has been seen with the mavens of far-right thinking, including he odious Joe Rogain and "Professor Doctor" Jordan Peterson (just back from Russia with his new brain implant!).  Now, granted, you can understand why a Billionaire would want lower taxes, but why promote someone who wants us to go coal-powered cars, when you are selling electric ones? 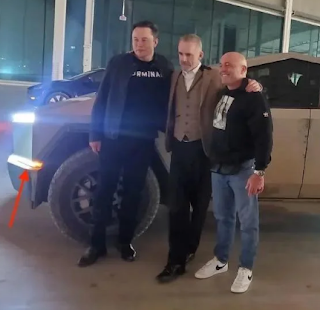 Yes, that.  You see, while I still think the Twitter takeover is a shell game (and others recently are thinking the same thing) he has no intention of consummating, Musk has hinted greatly that the first thing he will do once he "owns" or controls Twitter is to unblock the account of the most notorious and odious tweeter in the history of Social Networking:  Donald Trump.

Of course, whether people will fall for the Russian bots and other nonsense that happened last time around remains to be seen.  Will the media breathlessly report every tweet Trump makes?   Twitter doesn't really have a lot of subscribers, but the media all subscribes to Twitter and as a result, will make a news "article" about a "controversial tweet."

To paraphrase a famous comedian, everything I have heard on twitter was against my will.  I am not on Twitter, I am not a subscriber, I have never posted a tweet.  But since the news media thinks tweets are newsworthy events (when they are not even events!) they re-post tweets in nearly every news article.  Like it or not, tweets are flung in our face.

Two things could happen here.  Many are thinking that the secretive "family" financing Musk is using will require that he sell a big chunk of Tesla shares - which drove the price of Tesla down quite a bit.  Musk has margin loans on about half his shares (!!) meaning if the price drops too far, there will be "margin calls" to sell those shares to pay back the loans.  This in turn sends the price lower, and a death-spiral results.  We saw this in 2008-2009.

Meanwhile, nervousness about the whole Twitter deal has sent Twitter shares falling below the $54.20 bid (get it? 420! As in marijuana! Tee-hee! This is how big takeovers are done, with numerical puns!) which some observers claim means the market is saying there is only a 62% chance the whole deal will go through.  If there was a $54.20 firm offer on the table, the share price today would be damn close to $54.20

You can see how the whole house of car[d]s can fall apart rather quickly.  Or maybe that is the plan.  Sell out of Tesla and buy into Twitter - get out of an industry that is about to become very, very competitive (and one of thin margins) and into one with potential growth.  Or so he thinks.  One thing we are seeing today is that the "FAANG" companies are not invulnerable and let's face it, they haven't been around that long.  Sure, Bezos is building is "Big Screw" in Arlington, but the business of selling crap online and delivering it is proving to be one of narrow margins, particularly when your warehouse workers and delivery drivers start to unionize.  Netflix?  Well, we know how that is working out.  Facebook?  Profits are up, subscribers down.  Tech is a tough place to make money - consistently - particularly when your "tech" is not really tech.

And social media?  The problem with social media is there is always a new form of it coming down the pike.  Tick-Tock, which is utterly idiotic, has grown by leaps and bounds, even though the app allows the Communist Party of China to track your every move and thought (there is an X-rated version of Tick-Tock, I recently was informed - prime for Chinese blackmail!).  Meanwhile, people are tiring of Twitter and particularly Facebook, the latter of which is seen as a platform for Boomer Karens to complain about everything and spread rumors and falsehoods.  Facebook is unhip, and unhip is a death sentence on the Internet.  Thus, despite mounting losses, Zuckerberg is smart to try to latch on to the "next big thing" in social networking.  He only has to hope that his next big thing is the right one, out of the thousands of possibilities.  He may find that the Metaverse is less popular than some app written by an 8th grader in Iowa that does nothing but allow people to exchange 10-character messages that are nothing but emoticons.  Say, I should Patent that!

All I can say is bring popcorn.  The next few years are going to be interesting - if they are not in fact frightening or deadly.  What seems to be unstoppable forces today can quickly become eunuchs tomorrow.

Remember back in the 1980's when everyone thought "Japan is taking over America!"?  And yet today, Toshiba is bankrupt and Japanese young men are refusing to leave their bedrooms for years on end.

Things change.  Dramatically.  Faster than we expect.  The rise of Tesla is proof of this.  The fall could be as quick.