Knowing When To Leave 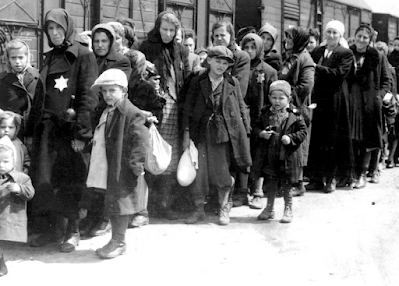 People say silly things like, "If Bush is elected, I'm moving to Canada!" - but they never did move.  It raises the question though, at what point do things get so bad in a country that you have to leave?

Migration is a big topic these days.  Life in many countries has become unbearable, either because of government oppression or because of basic economics.  When people are being tossed in jail and tortured, or cannot find enough food to eat, they may look on in envy at other developed countries as a place to migrate to.  It isn't hard to figure out why they are migrating - even though it involves the risk of death.

But what about developed countries?   I was born in 1960 and World War II wasn't considered ancient history back then.  As kids, we played "Allies and Nazis" instead of Cowboys-and-Indians, using the leftover army gear my Dad brought back from the war, as well as a dented a bullet-ridden German helmet they found during a picnic they had at El Alamein in the postwar era.  Hitler and the Nazis - and the horrific things they did - were recent news, not ancient history.

One thing that always puzzled me about the holocaust is why more Jews (and other victims) didn't just leave Nazi Germany (and other Nazi-occupied countries) when they saw what was going on.  And the answers are complex and varied.

One answer is the frog-in-boiling-water analogy. Changes happen so slowly that people get used to each new level of oppression. "Mr. Hitler talks a good game, but he can be reasoned with!" people said. Or the actions of the brownshirts were written off as a few bad eggs - much as people are doing today with the January 6th insurrection.  Even after Kristallnacht and the many laws enforcing the wearing of the Star of David and eventually putting Jews into Ghettos, many thought that things could not get worse.  And yes, some folks, getting onto trains to Auschwitz, thought they were going to a work camp, where they would be provided with jobs and a place to live.  Right up to the very end, people lived in denial.  "Oh look, showers!"

When things like that go down, when should you look around and think, "Maybe I should duck out of this!" But then again, it may be hard to do. People have connections to a country - means of employment, family connections, and monetary ones as well.  To move, you would have to liquidate all your investments, find a new country that would accept you, and if you are at a working age, find a new job.

The latter is a critical issue.  My Cuban friend relates how many of his family and friends had to work at menial jobs when they came to the United States, as their work experiences and academic degrees were not recognized here.   Doctors and Lawyers had to get jobs as restaurant busboys and were treated very poorly. Most people assumed they were illegal immigrants from Mexico and called them "wetbacks" - or worse.  It was a pretty shitty situation.

Of course, the Nazis knew that the Jews and other persecuted minorities might try to flee - and escape their dragnet/  So they passed laws making it nearly impossible to remove money from the country and make it hard to get an "exit visa".   Sure, maybe you could sneak away, but where would you go, flat broke?  No other country would accept you.  And besides, things weren't that bad just yet, were they?

This is an interesting issue to me, as I can see where things are going in this country, a little bit at a time.  Friends of ours left for Costa Rica well over a decade ago, convinced that George Bush was going to start interning Democrats and Liberals in concentration camps.  Their concerns were a little over-the-top, but on the other hand, Costa Rica is a nice place to live.  Maybe they were just ahead of their time.

On the other hand, many of these countries are tiring of expats moving there - even if they bring money with them.  And some countries, such as Canada, which might have seemed like a Liberal haven, turn out to have political issues of their own.  Well, that and it gets really fucking cold there.

In most cases, if you want to move overseas, you have to prove you can support yourself or have a certain amount of money to "invest" in the host country - usually a half-million or more.   And no, they aren't interested in you working for a living over there - and taking away a job from a native-born citizen.  And you have to hope the host country doesn't have an extradition treaty with the United States - lest President Trump (the second time around) decides to issue a warrant for your arrest for being an "Enemy of the State."

Far-fetched?  Maybe. Maybe not. This is, after all, the guy who promised to "lock her up!" without much evidence of any crimes being committed.  And this is the political party whose members are talking about firing squads for transgender people or killing drag queens at story time.  Deadly rhetoric usually leads to deadly actions.  We've already seen a wave of violence against Asian people - often fatal violence - after all the anti-Asian rhetoric espoused by the GOP and You-Know-Who.

Hey, but I'm not Asian, so it doesn't affect me, right?  That's how it starts.

What would trigger me to think about moving from the United States?  I am not sure, but if Trump were re-elected (or DeSantis elected) I would have to think about it.  The rhetoric surrounding George Bush was probably a bit overheated - he seems almost like a centrist compared to today's politics.  Not too much changed in the USA during his two terms - it was business as usual and Republicans didn't rock the boat too much.

But today, well, that has changed, with the GOP strategy calling gays "groomers" and far-right "militias" storming libraries and gay pride events.  Oh, sure, they were caught before they could do any harm - this time.  The next time, they will be better prepared.  The Beer Hall Putsch was considered almost comedic at the time, and most of those arrested were released early - after all, that clown parade couldn't be taken seriously, right?  But a decade or so later, they were in power and consolidated power and started the largest war and genocide in world history.  No one was laughing then.

I see a similar parallel here.  January 6th was a dress rehearsal - a poorly planned coup but also a means of testing the limits of government.   We relied on a few people - a handful at the least, a dozen at most - to do their Constitutional duty. Vice-President Pence, a few other members of Congress, our Governor here in Georgia and our Secretary of State - as well as election officials in a number of other States.   Many of those people have left office and been replaced by Trump loyalists.  How do you think the vote count will go the next time around?  That is, if they even bother to count them.

And what will be their agenda if they "win" this time?  They kind of have telegraphed what they will do, based on what they have been saying and actually have done.  It is clear that minority groups are in the cross-hairs, and the gays are next on the hit list.

We have a military that has been infiltrated by far-right Christian cults. The Air Force Academy in Colorado Springs is basically being run by the Christian right.  When the time comes to "do the right thing" the military may do what they think is the right thing, but that will be appalling to a majority of the country.

A large swath of the population will welcome this - they see progressive causes as being against God, mostly because they have had this idea beaten into their heads over and over again at Pastor Cashflow's Megachurch.  And most of the Billionaires and even lesser mega-riches will not only go along with this, but actually fund it through PAC donations, in return for tax cuts (well, actually tax elimination) and loosening of regulations and labor laws.

Far-fetched?  Hitler lead the "National Socialist" party, but it was anything but Socialist.  In reality, it was an unholy alliance between government and industry, with huge government contracts being let out to arms makers - provided they were supportive of the party.  Unions?  They were nationalized and the main goal was labor peace, at any cost.

Today, we see the same sort of thing going on.  People like Elon Mush are willing to endorse Donald Trump if it means he gets to put a penny more in his pocket and prevent his employees from unionizing. Speaking of which, do you remember when I said he could end up bankrupt? Well, whaddya know?  He's hemorrhaging cash. They guy relies on government contracts and government handouts to survive.  He'll support whoever increases his bottom line.  Heck, he even looks like a Nazi!  Sort of Himmler-esque.

Maybe it won't happen.  Americans will come to their senses and realize that gas going from $3 a gallon to $4.33 a gallon (here on the island, no less) isn't quite the end of the world, particularly if you lived though multiple gas crises and bought a vehicle that got reasonable gas mileage.  Maybe Americans will realize that Democracy itself is more important than cheap gas.

Maybe, but I doubt it.  People are freaking idiots.  Look around you.