The Car in a Bubble 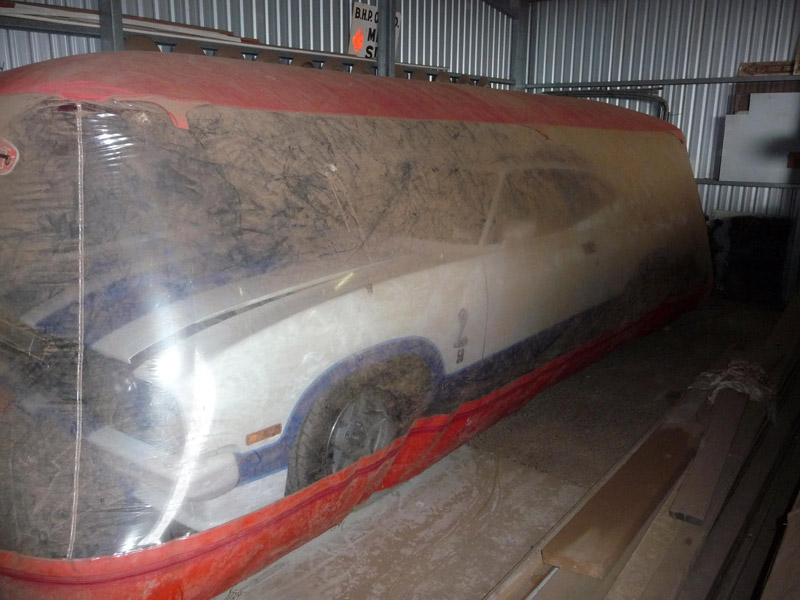 If you put your car in a bubble, is it still a car, or just a large paperweight?


Years ago, when I was in to BMWs, I saw on a website, a photo of a pristine 1972 BMW 2002tii placed in a plastic bubble which was inflated with nitrogen.  The idea was, since the owner spent so much time and money restoring the car, why not keep it "pristine" by putting it in a nitrogen bubble?

Of course, it is kind of hard to drive that way.

By the way, the photo above is from a company called "Carcoon" which doesn't use nitrogen, but instead circulates air with a blower and filter, to keep the air dry and dust-free, even in the dusty conditions shown.   Seems like a neat idea, but what a pain-in-the-ass to put on and take off, when you want to actually use the car.

But that is the point - many people with "collector" cars never use them, for fear of destroying their value.  So many cars appearing on Jay Leno's Garage (the YouTube series, please, not the television show!) are never driven by their owners.  One owner confessed that Jay driving the car around the block was the most the car had been driven since restoration.

So what's the point in owning such a car?   I am not sure.  A car is a machine for transportation, not a 4,000 lb paperweight.   I guess some people fall for this "pride of ownership" thing, as if owning something (which often involves merely writing checks) is some sort of accomplishment.  "Hey, I own a really cool car!" they say.  "Oh, can I see it?   Can we go for a ride?"   "Well, no.  It's in a plastic cocoon, locked away in a garage, and if we actually drive it, that destroys its value.  I drove it once, but it wasn't really that fun or comfortable to drive, anyway."

So what's the point?  And why would anyone pay a lot of money for such a "collectible"?   It is an interesting question - people put values on things based on rarity and condition.   A rare painting, for example, may give joy to the viewer, or it may merely be a talisman of wealth, stashed away in a locker somewhere.    The problem with the latter approach is that the item in question becomes only a commodity, and investing in commodities is a tricky business.

Commodities, unlike income-earning investments, have a value based on perception alone.    People think Gold, or bitcoin, or 1960's muscle cars are worth money, so they bid up the price.   But then the perception changes - or the supply increases - and the prices plummet.  And this is why "investing" in collector cars is such a tricky business.  In the 1990's, the dot-com wunderkinds of Silicon Valley all went out and bought vintage Ferraris with their newfound wealth - driving up the price of even plebeian models.   Then the dot-com crash occurred, and suddenly, Ferraris became cheap - well, at least cheaper.

For a while there, people were bidding up the price of 1960's Mustang convertibles to stratospheric prices.  And as you might expect, some clever bodymen bought Mustang coupes and then converted them to convertibles.  Ford actually sells entire body shells for this purpose.   All you need is a VIN number and you can build a "new" old '66 Mustang ragtop from the ground up.   I should have kept the title and VIN plate when my rusted-out example went to the junkyard in 1976.

Of course, original cars in original condition are a rarity, and one reason why "survivor" cars are commanding high prices in the market.   Yes, there are 50-year-old cars out there with only a few thousand miles on them.  Problem is, you drive them, you destroy the value as a low-miles "survivor" car.    And the idea that you can buy a car today, and not drive it and create such a car merely by waiting a half-century is flawed.    Even if you could afford to do this (buying a car when you are 20 and then paying for storage for 50 years) odds are, you might barely recoup your investment over that long period of time.

And anything less than 50 years is just a used car.   I recounted before how I met a young man who bought a 1985 Mustang "anniversary" model and then put it in a garage, thinking it would be collectible.  A decade later, he tries to sell it, only to realize it is just a low-mile used car, worth only a little more than a regular used one.

I recounted before how Gen 5 Corvettes are for sale all day long on Autotrader - some with  under 100 miles on them.    Again, people are convinced that a mass-production vehicle will become a collector's item by dint of low mileage - but it is little more than a 4,000 lb Elvis plate from the Franklin Mint.   In other words, it isn't worth much - other than as a used car.
The bubble mentality is a poverty mentality - the idea that these cars are priceless collectibles, rather than money pits.  The cold hard reality of car collecting is that if you spend a dollar on restoring or maintaining a car, the best you can hope for is to get fifty cents back when you sell it.
And that is no way to accumulate wealth!
Newer Post Older Post Home