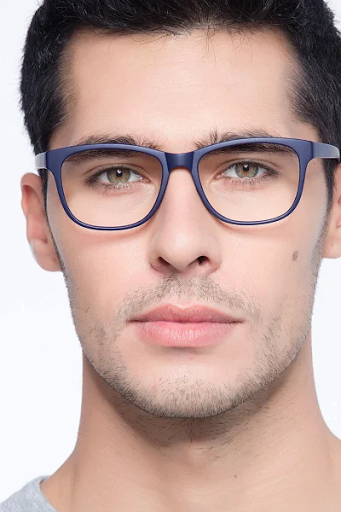 A bargain?  Yes, but you do get what you pay for.  Still, we'll probably not go back to the mall stores. These frames, however, at $9, were not a good bargain,and were crooked even on the model used on their site!

It is been about six months since we each bought four pairs of glasses from EyeBuyDirect.   For the most part, we are happy with them.  Some pairs fit better and seem more durable than others - usually the more expensive pairs.

One pair of Mark's broke - a $9 frame that was crooked on his face.  It was even crooked on the face of the model in the photo on the website!  He tried to adjust the earpiece and it snapped off.  The 365-day guarantee says that they will replace it, but it doesn't cover "intentional damage" whatever that means.

Mark prefers the plastic-framed glasses, as the nose-pieces are molded-in and easier to keep clean.  Buy that means they are not adjustable, either.  I prefer the wire-frame kind, as the nose pieces are adjustable, to some extent, but also are a pain to keep clean and eventually yellow and get brittle.   No pair of glasses lasts forever, of course, and these glasses might last a year or so - and are priced accordingly.

When I went to the "designer" glasses place in Washington, DC, I bought a pair of Kuzao Kawasaki glasses - frameless.  Sarah Palin made them famous.  The nice thing about those was they outlasted four or five sets of lenses.   The optician kept the nose pieces in stock, so every time we put new lenses on them, the plastic hardware was replaced.    Yes, they lasted for years, but then again, the cost as much as used car.

Glasses get sat on, dropped, lost, and otherwise damaged.   Buying expensive glasses on the premise they will "last longer" may be short-sighted, as they may be lost or destroyed before you get that extended life out of them.  It is like spending $1000 on a fancy new iPhone (or the latest Galaxy) and then cracking the screen or dropping it in the toilet. Sure, you can buy "insurance" for your phone, but why bother?  For the cost of the "insurance" you can buy the last generation phone, used, on eBay and then not care if it is damaged, stolen, or breaks.

It is like anything else - cars, houses, whatever.  If you own something and are so paranoid about it breaking or being lost or stolen, it is a sure sign you can't really afford it.  If you are buying extended warranties, burglar alarms, or whatever, to protect your "things" maybe it is a better idea to own cheaper "things" and worry a lot less.

I sat on my wire-rim glasses, and while I was disappointed, I was able to bend them back into shape and re-install the lenses.  And if that didn't work, well, I know where to buy a replacement pair for under $100 - well under.

It is one reason why owning a used car is better than buying a new one.   When you scratch a used car (and I have managed to do this already to the King Ranch) you shrug it off as normal wear-and-tear.  For a new car - particularly one as costly as the King Ranch was, when new) you freak out, as it is no longer "perfect" and brand-new anymore.   Dirt on the carpets, the loss of that new-car-smell - they are all small tragedies you have to live with.

With the hamster and the Nissan, even though we bought those new, they were so cheap that it was a "well, no great loss" kind of thing.  We aren't running a car museum - I've tried that, and it is pointless and time-consuming.   It pays to buy below your income level, and just not care.

So, oddly enough, just as these glasses broke, Eyebuydirect sends an e-mail offering BOGO (their standard offer, alas) plus 15% and Mark buys two new pairs for less than $125.

Whether they will take back the other pair and replace it remains to be seen.  I'll try calling them (their guarantee button disappears after three months, and the "no questions asked" replacement is only good for a week or so).   But guarantees are like extended warranties in a way.   If you pay less, you can afford to walk away, rather than play warranty or guarantee lawyer and regale your friends about what a raw deal you got out of life.

It is easier to just pay less and move on.  These are disposable one-year glasses, and they work well for that.  In an era of disposable phones, computers, and televisions, it makes no sense at all to spend hundreds on a pair of glasses anymore.  Well, that is, unless you are fabulously wealthy.

And if you reading this, you aren't that!