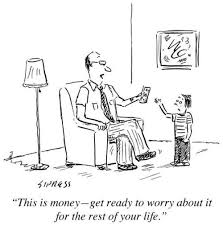 No one goes through life without worrying about money.
As I noted in How the Media Portrays Our Lives, the television depicts us as having pretty decent lives - nice apartments, decent furniture, and of course, brand-new cars.   No one ever bothers to ask why in a political thriller movie, the hero, who is a GS-11 government drone, can afford to live in a row house in Georgetown, DC, down the street from Teddy Kennedy's house.

It is a movie, not real life.   But I hear again and again from some younger folks who tell me how great things were back in the 1960's because they saw it all on Mad Men, which is a television series, not a documentary.  In those types of shows - all types of shows - people are never shown worrying about how to pay the rent this month or make the mortgage payments, or whether a check is going to bounce.  In fact, people on the television - and the movies - are pretty much worry-free, in terms of finances, unless the show is one where the primary subject is poverty.

But even then, in shows like Good Times or Roseanne, while the primary characters are portrayed as "poor" the show never delves into the constant worry we all have about money - after all, that would make for a boring and repetitive show. In fact, such "poverty shows" starting with The Honeymooners and moving onward, usually have episodes dealing with some sort of financial hi-jinks, where the boys are going to invest in some get-rich-quick scheme.  A lot of money passes through the hands of the poor - the problem is, they don't manage to hang on to much of it.

The reality, of course, was back in 1967, the "Mad Men" were worried - worried about losing their jobs, losing a client, how to make the car payments, the utility bill, or the mortgage.  Back then, it was called the "cost of living" - and everyone griped about it.  Of course, some folks intentionally act dumb and say, "Well, everything cost less back then!  You could buy a coke for a nickle!"  Well, maybe not a nickle, but more like 25 cents, which in today's money would be a dollar.   In other words, the price is about the same. And a lot of things actually cost less today than in the past, particularly all the electronic junk in your life, which back then mostly didn't exist, other than one flickering black-and-white 19" tube television in the family room, and maybe a portable AM radio that set you back $50.  Well, that's what we had, anyway.

And yes, my parents worried about money - all the time.  They often didn't share these worries with us, other than to grouse about bills and costs - which is why "Dads" are always hollering about turning out lights and not taking such long showers.

If you look at the past through rose-colored glasses, it may seem like everyone drove a big hemi muscle car back then or some giant pimp barge.  But such was not the case.  Sure, you go to the old car show, the fancy cars are the ones on display, the ones people preserved and restored.   But the reality is, most cars came off the line pretty stripped.   The six-cylinder, two-speed four-door Chevy my Grandma had was pretty typical.  It had a heater and AM radio!   What more do you need?   Maybe if you wanted to get fancy, you might go with a small V-8 and Turbohydromatic.   Cars like that were made in the millions, and people drove them, used them up, and threw them away.  That was all they could afford.  Those fancy cars you see at the car show cost twice as much money and were difficult to insure.   That's the reality of that era, or indeed, even today.  Most cars coming off the line are mid-level trim models, used and abused and then junked, after about 10-15 years.  Few are the hi-po racer models, which is why those are more coveted.

So what's the point?   Well, if you think it is abnormal to worry about money, think again.  Yes, the rent is always "too much" and your income "never enough" - and the wolves are always at the door.  At least that is the way it has been my whole life, but then again, one reason it was this way was because I made a lot of poor life choices.  And in retrospect, many of these poor choices (in both senses of the word) were based on normative cues I got from my friends, neighbors, co-workers, and of course, the almighty Tee-Vee.

Having a brand-new car?  That's normal.  Eating in restaurants all the time?  Normal, too.   Going out to bars on a work night and blowing $20 on draft beer?  Normal, right?   And so on down the line, whether it is shopping at the mall for the latest fashions, or paying $20 for a blow-dry feathered disco haircut (it was the 70's!), we all take our cues from our fellow human beings.   And if you go against those cues, well, you get shouted down in short order.
What got me started on this was a stupid WaPo article a few months back about how Millenials are the "unluckiest generation ever" which is a bit of a stretch.  Covid may seem bad, but with a 98% survival rate, hardly as bad as polio or the plague or the Spanish Flu - all things previous generations had to deal with, but our generation doesn't (provided they don't subscribe to anti-vaxxer nonsense).
In terms of economics, my parents' generation had to deal with the great depression.  Well, maybe Millennials will have to deal with that next year - we'll see.  But 30% unemployment rates?  Not yet.  And then there was World War II.   No, maybe our generation is the luckiest ever - but Millenials are hardly the unluckiest.
But a lot of this grousing is about basic personal economics.   I get e-mails from people telling me that they are making good money but want a nice house in the SF bay area - and can't afford it!   Well, guess what, neither can I.     No one can "afford" to live in the crazy-price neighborhoods, and no, it isn't your "right" to live in Beverly Hills, either.   And passing a law setting rents to "affordable" prices will only mean that those who are lucky and have connections will end up with those kind of deals - as rent control in New York City demonstrated.
So, everyone worries about money.   How do you get off the money-worry bandwagon?  In short, you don't.  You see, money is just a representation of wealth in our modern society.  Before there was money, there were equivalent worries - worry about whether you would have enough to eat, whether your children would be healthy, whether you would get sick, whether the neighboring tribe would attack you to take what little you had, whether it would get cold and you wouldn't have warm clothing and a place to live - and so on and so forth.   Money worries are survival worries and so long as you are a living and breathing entity, they aren't about to go away.
There are options, however.  And oddly enough, money worries often create more money worries.  The typical "Sad Sack" tends to worry about money and tries to borrow more as a way out of his troubles - not realizing that more debt is gasoline on the fire.   Or, as I have noted before in this blog, many people drown their worries in consumerism - buying more trendy stuff, as if dissipating wealth will somehow create more of it - or at least the illusion of wealth.  For these sort of folks, the idea of spending less and saving more - "Living Stingy" - is an anathema.
And I say this from experience - that was the old me.   I wanted "things" that only a wealthy person could or should afford, and I went into debt or squandered once-in-a-lifetime payouts on them.  Sure, it was fun to play "pretend rich" for a few years, but the constant worry about juggling finances to pay the bills eventually made it miserable.   I sold off a lot of stuff and learned to live on less.   And a funny thing - once I was debt-free and had real wealth, I could afford many of the things that in my previous life I never would have been able to afford - and pay cash for them, rather than get screwed on financing deals.
Funny thing, but the number one competition to the Washington Post - the New York Times, published an article along these lines (this was in 2014, before it became click-bait Trump Hate like the WaPo). Worrying about money often leads to making bad money decisions, which in turn leads to more worrying about money.  Funny thing, that. 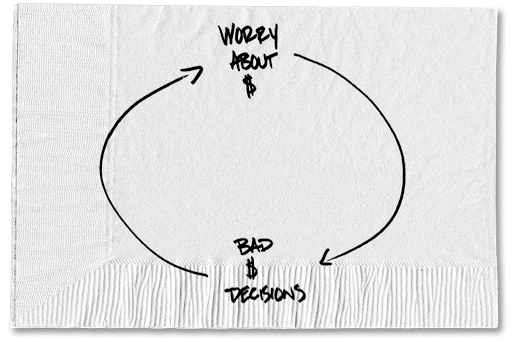 The Grey Lady used to publish useful information rather than just agitprop.
The media loves a good sob story - people click on those.   We all like to feel sorry for ourselves as it feels good to feel bad sometimes.  It also feels good to blame other people for our problems rather than owning them.   I know when I was in debt that "debt forgiveness" seemed like a swell idea to me.  Sadly, no such forgiveness was available, and I had to pay back all those debts, a penny at a time.  But it wasn't impossible, and in retrospect, it was pretty easy.   And it would have been a lot easier if I had decided, early on, that things like cable TV, hobby cars, eating in restaurants, take-out and delivery foods, and big-box lumberteria weekend projects, were not really all that necessary - or even desirable.
I could have paid off my student loans (the equivalent of $70K in today's money) in a few short years, but I chose to buy "things" instead. Oddly enough, when I was in debt, I always shopped at the "premium" grocery store, bought brand-name items, and never looked at prices.  Such is the nature of poverty, of the wallet or spirit.
So why does the Washington Post print these articles that pander to Millenials - or at least the sad-sack variety?  Well, they get clicks, and Jeff Bezos is in business to make money, so they print what people will click on.    And you'll never go broke telling people that their situation in life is someone else's fault.
It is as simple as that.
Newer Post Older Post Home