They Still Sell Tulips in Holland... 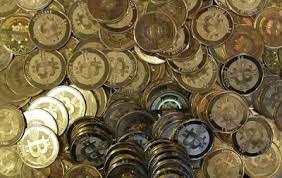 Will Bitcoin bubble?  In a way, it already has, having spiked and dived and spiked again.  Does this mean it will go away forever?  Maybe, maybe not.  All I know is, I can't afford to gamble - and that is all Bitcoin is, a gamble.

A reader asks whether I think the Bitcoin bubble will burst, and of course, it will, but predicting when that will happen is hard do to.  Bitcoin, to recap, now has no chance whatsoever of becoming a "currency" given that the puzzles needed to be solved to decode a transaction can take an hour and cost $20 or more (and increasing every transaction).  So no, you aren't going to pay for a coffee at Starbucks with your Bitcoin "purse" and even big-ticket transactions (the vaunted "buying a Tesla with Bitcoin" meme - which hits two trends at once!) are immediately converted into local currencies (as has already been done).

But as some readers have pointed out, Bitcoin really isn't all as anonymous as it seems, as in order to convert your Bitcoin to local currency (to spend it) you have to go through a local exchange.  And there's where the trouble begins.  While Bitcoin is touted as 100% secure and anonymous (provided you don't throw away your hard drive or lose the codes you printed out) the exchanges are anything but.  Local governments can subpoena local exchanges in their district, regulate them, or shut them down.  And more than one local exchange has been accused of fraud - stealing bitcoins, or just mysteriously closing at midnight, taking everyone's coins with them.

And if you are a fraudster, it is kind of hard to complain to the local government.  "That guy stole my Bitcoin, officer!  All the money I made from illegal drug trafficking is tied up in there!"  And of course, if nothing else, the authorities would have questions as to whether you paid taxes on any of that coin.  If governments decide to crack down on Bitcoin and other virtual currencies (and there are signs they already are) then it could get messy.  People might leave in droves.   Problem is, we have no way of knowing if and when this will happen, so timing the market is nearly impossible.  Perhaps some governments want Bitcoin around, for their own nefarious purposes.  Maybe the CIA wants Bitcoin, at least for a while longer.  Who knows?  And that is exactly the problem.  So-called "Bitcoin Experts" have no real idea about the future.

The other vaunted "purpose" of Bitcoin is as a "virtual investment" or "virtual gold" which like so many other virtual things, is illusory.  The "treasure" you accumulate on your "quest" video game isn't real treasure, it just exists as a number in a computer somewhere (caveat, so do dollars and stock certificates).  The difference is, of course, you can't spend the "treasure" you got on "Elf Quest 4.0" in real life.  You can buy some fancy virtual armor, upgrades, and "flair" however!

Gold is not a good "investment" - it is a commodity.   You are betting on the price of gold going up or down.  But it does have real uses, as jewelry and particularly in electronics (which is why we Engineers get pissed when idiots bid up the price so much!).   It is a thing, it exists, and you can touch and feel it.  Things like stocks may exist only as numbers on a computer somewhere, but they represent a part of a real factory that makes real products, pays real employees, and (hopefully) pays real dividends - earning money from your investment.  It also represents a legal cause of action - our legal system recognizes your "numbers in a computer somewhere" as representing ownership in a fraction of some enterprise.

Bitcoin?  I am not so sure.  One reason governments have been reluctant to regulate Bitcoin, I think, is that as a "virtual" currency, it is about as real as the "treasure" you earned (or bought) in Elf Quest 4.0.  How do you regulate something that isn't real?  Does the legal system even recognize Bitcoin as anything other than a possible contractual obligation?  And did you sign such a contract when you bought or sold Bitcoin?  I suppose they could go after rogue "exchanges" under existing fraud statutes, but it doesn't seem that the authorities are too keen to clean up the mess made by people who were too greedy.  And why should they?

Will Bitcoin disappear entirely?  Or other virtual currencies?  Maybe, Maybe not.  They still sell tulips in Holland, even after one of the biggest bubbles in history.  People still buy houses in Ft. Lauderdale, even as many decreased by 50% in value after 2008.  I doubt it will go away - entirely.  But given its value is based entirely on perception, it may decrease dramatically, particularly as some other virtual currency eclipses it.  First to market is often last in the marketplace - something that should keep Mr. Musk up late at night (after all, he makes more money selling carbon credits and more recently, speculating and hyping Bitcoin, that he does actually selling cars).

The real opportunity for a virtual currency, as I noted before, is in moving money around.  When I had to pay overseas clients (or vice-versa) it was cumbersome and expensive to send wire transfers.  In Europe, they do this with a click on their phone.  In America, it means a trip to the bank and filling out paper forms - or at least it did not long ago.   Credit cards are expensive but easier to use.  Paying a 3% transaction fee on the receiving end and a 3% "currency conversion fee" on the sending end, gets old really quickly.

I had hoped virtual currency would fix this, but it seems there are real costs involved in moving money around, that cannot be entirely eliminated.  In addition to the infrastructure needed (people, computers, branding, advertising, etc.) there is the risk of currency fluctuation.   I recall a few years back, some fellow claimed he would transfer money overseas for free.  The kick was, he was playing the float with currency conversions and hoping that he could make a little money if the currencies moved in his favor from the time the transaction was made until it settled.

This appears to be the model of "Robin Hood" as well  - they do "free trades" but your "trade" is just a number on their computer until it is executed later on by someone they paid to execute the trade.    How do you make money on that?  I guess you have to hope there is a delta between the time of trade and time of execution.  It is like betting on futures without knowing which futures you are betting on.  Not surprisingly, "Robin Hood" had to seek out billions in capital to shore up this model when it all went wrong.

So even as a means of transferring money, I am not sure that Bitcoin or any other virtual currency will crack the nut of exchange costs.  If anything, it seems that these currencies are less secure and more costly that credit cards and wire transfers.  And as I noted before, after 9/11 I was grilled every time I transferred money to Japan or Germany (by a woman in a burka, no less!) as though I was funding terrorism.   How long before the government cracks down on virtual currencies as well?  Unless, of course, as I noted, the CIA and NSA are allowing this to fester, as they have some sort of interest in it.  Perhaps they merely planted some back-door in the code and can blow up the whole thing whenever they want.  It is kind of funny they haven't shut it down or regulated it to death - yet.

The problem with Bitcoin for the "retail" investor is that it is gambling.   You don't know what is underlying these spikes in prices - or the sudden declines.  And when people like "The Sooze" Orman say weird things like "I like Bitcoin!" and then can't elaborate as to exactly why (other than they were perhaps paid as an influencer?) you have to wonder.  It just smacks of the same crap I've heard all my life, about dot-com stocks, gold, houses, gold again, dot-com stocks again, and then houses again (which right now are on a tear, too!).  When someone says, "my target price for gold is $X" but doesn't say why this is so, you know you are being snookered.  Oh, but he's an expert, right?  So he doesn't have to explain why, his opinion is sacrosanct.

But the point is, as "retail" investors, we are gambling with our life's savings.   You throw money at speculative things, you are not investing, you are gambling.   And while wasting $500 to $5000 on some stock or gold or bitcoin or some option might not bankrupt you right away, it is akin to dropping $10 a day at Starbucks every day of your life.  Over time, those small losses add up, with compound interest, to big numbers that are missing from your 401(k) when you retire.  And let me tell you, you'll miss that money, a lot, when you get older.

Are we in the middle of a market bubble?   It is hard to say.  When the peak will occur is anyone's guess.  Fear of Missing Out (FOMO) is keeping a lot of people in, and encouraging more to jump in.  The best time to jump in was in April of this year.  The best time to get out is.... damn time machine is out of order - again!

But with so many people unemployed, so many companies going bankrupt (and leaving so many other companies on the hook for unpaid bills, so many investors with worthless stocks, so many banks with pennies-on-the-dollar for loans) you have to wonder about the underlying "strength" of the economy.   Everything - and I mean everything - is going up in price.  It makes me nervous, as I am living on savings - savings that could be wiped out in a heartbeat by inflation.

Predicting the future is a difficult business.  We could be in for a post-war depression, perhaps.  Or maybe it will be like after WWII, when pent-up demand causes the economy to skyrocket.   The only real answer I can see, is to diversify your investments, and become more conservative with them over time.  That, and have a plan to pay down debt, over time, rather than accumulate it.