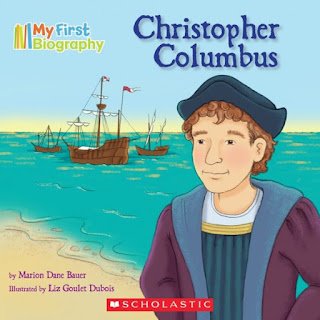 The dead are facing a new reckoning in this era of "woke."   But is it fair?  And was Columbus really only 15 when he crossed the Atlantic?

I mentioned in a previous posting that Italians are pissed-off that Columbus Day is being thrown under the bus, not so much because they love Columbus, but they are losing a holiday of ethnic identity.  I mean, suppose it was found out that St. Patrick was a real jerk?  It is not that anyone even really knows or cares who St. Patrick was, or even St. Nicholas (the real saint, not the marketing icon).  These are just props for national holidays.

But in that posting, I said in half-jest that Columbus was a racist genocidal maniac.  And there is evidence to suggest that he was a cruel and inhuman person, interested more in personal glory and riches than in "exploring" the world.  He went West to find riches, not to make friends with the natives, who he stupidly called "Indians" - creating a name issue that plagues us even today.  But he killed people - or his minions and associates did - and forced the natives to dig for gold, which he stole, or even dive for pearls, which he also took.  How many were murdered and how many died of disease is hard to say.  One thing is sure, the arrival of Columbus was nothing for the natives to celebrate.

But was he particularly evil or just typical of his day - or even today?   If Columbus hadn't crossed the Atlantic, someone else would have - as the Vikings did.   Of course, we all know that Vikings were a peace-loving people who never hurt anyone, so surely they came to North America to peacefully trade with the natives.

Speaking of America, its very name is Italian - Amerigo Vespucchi - while the Italians were one of the few countries not colonizing the "New World" but not for lack of trying.   Almost every country in the world has tried its hand at colonialism, and those who haven't, well, only didn't do so because they didn't have the means or wealth to conqueror others.

But it is interesting that Columbus Day became this Italian holiday, when the voyages Columbus made were financed by Spain, and it was Spain that became the conquering force in much of the New World, its galleons of pilfered gold travelling from Mexico to Spain during hurricane season, with predictable results.   Spain wanted to acquire wealth, and I wonder if in fact it didn't backfire.  By increasing the supply of gold in Europe, one could argue that the value of gold decreased.  It would be like chasing your tail.  The more gold you accumulate, the less it is worth.   And it seems sort of horrific that people would travel halfway across the planet, enslave people and kill them, just for a few bars of a metal that at the time had only ornamental purposes.

But should we condemn Columbus for his actions?  What about other historical figures who were notable, but less-than-perfect?  Franklin Roosevelt lead us through a depression and World War II.  He gave us the New Deal and the Atomic Bomb.  He incarcerated Japanese citizens and turned back a shipload of Jews, who were later executed in Auschwitz.   Which Roosevelt do we honor?  The man who created Social Security and helped "the little man" or the man who let the Navy remain segregated during the war?   And if it wasn't Roosevelt that was elected, would it have been another President doing about the same?  This shit gets complicated.

That's a rabbit hole I don't think anyone should be going down; Columbus was a product of his times, no different than anyone else; and I doubt "racism" or "genocide" were ideas that even registered with them.

They were Catholic Christian, and anyone who wasn't was either objects for conversion (for the sake of their souls, and they believed that without irony) or their enemies, servants of Satan who needed to be destroyed. The zeal with which they pursued either course of action was not enhanced by "racist" notions; they would just as willingly turn fire, blood, torture and mass executions on fellow Europeans who they considered to be heretics as they would on people of other races - see the Albigensian Crusades, in southern France and Northern Spain, as examples..
Columbus, in fact, probably had more of a conscience than the Hidalgos who accompanied him on his later voyages; he at least wanted to preserve and convert the Indians (err..."indigenous peoples") and considered them innocent, children of nature; the Hidalgos, in contrast, were by and large hard bitten, experienced veterans of the reconquista, many of them "second sons" coming to the new world to make their fortunes, not by "work" but by the exploitation of the indigenous peoples. Many of them had no interest in conversion or "race"; they were motivated by greed - and, they would have been just as brutal if turned loose on the populations of Europe, as the depredations of mercenary armies in the Italian civil wars of that period prove - and which escalated exponentially during the wars of religion - see the effect of the 30 years war on the population of what would eventually become Germany..
And, those attitudes were hardly unique, or confined, to Europeans; the depredations of the Ottoman "Akinji" (unpaid, irregular skirmishers and foragers raised for campaigns, whose only reward came from what they could loot) were infamous; the Ottoman practice of forcing a "tax on christian children", selecting sons to be taken from their Christian families and  raised as the Sultan's slaves; the practice of Moorish corsairs to swoop in on Christian villages, loot everything and take entire populations into slavery on a huge scale are no less brutal than what is blamed on the conquistadors; and neither of them can match the unparalleled psycopathic brutality of someone like Timurlane, who slaughtered and killed an uncountable number of people, regardless of race or religion, if they opposed him.
And, let's not forget that, by and large, the "indigenous peoples" of the Americas were no innocent children of nature themselves; contemporaneous with the arrival of Columbus, the Aztecs were atop a civilization in the valley of Mexico that was slaughtering (err, "sacrificing to their Gods") uncounted thousands of people each year in the name of "religion"; that the descendants of the Maya had nearly reduced themselves to extinction through brutal internecine warfare. Or that the slavery imposed on black Africans was ony possible by the eager participation of other black Africans themselves, who delivered huge numbers of captives to the European slavers in exchange for trinkets.
Bottom line, brutal and cruel and greedy as the Conquistadors were, they seem to have been pretty typical of the state of mankind across the globe at the time. They didn't, by and large, intentionally slaughter the "indigenous peoples", as someone like Timurlane might have; they actually needed and wanted the natives to live, as they depended on their labor to make their system work; what devastated the native populations was the introduction of European diseases, but that was hardly intentional.
So, I don't know; is Columbus deserving of a Holiday? He was brave, resourceful, and determined; and he was first among his contemporaries to discover the existence of the Americas; so for that, I think he does. Was he a saint? No. Was he any worse than anyone else would have been? No, I don't believe so. We should celebrate his achievement; it did "Change the World"; he doesn't have to a "perfect person" to do that.