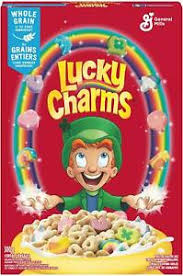 My peeps are being dissed, once again!

I have mentioned that there is a dichotomy in our family as to whether we are Irish or Scotch-Irish or Scottish (the real Irish would view the latter two as the same thing).  At one time in this country, there was no advantage of being Irish - or Catholic for that matter - and many folks, including my own Father, passed as "Protestant Scots" in order to get ahead in the world.

But that has changed dramatically over time. There is less prejudice against Irish-Americans these days, although anti-Papism is still virulent among the KKK and the like. We've only had two Catholic Presidents in the history of our country, and one of those was shot.

But today is St. Paddy's Day, a holiday celebrating all things Hibernian. It is akin to what used to be Columbus Day, which became an Italian holiday celebrating all things Neapolitan. Now that Columbus has been discredited, perhaps they need to institute a new holiday for Italian-Americans.  The Italians objected to the censuring of Columbus, not because he wasn't a racist genocidal maniac (he was) but because they lost their signature holiday.

Italians, by the way, faced a lot of the same prejudices as the Irish.  And the stereotypes of Italians, even today, are not flattering.  The whole idea that anyone Italian is somehow connected to organized crime, for example, is insulting.  And of course there are a litany of slurs and slang words used against Italians.

With the Irish, the stereotypes are many - as are the slurs.  But for some reason, on St. Patrick's Day - the day we celebrate Irishness - most Americans wallow in the indulgence of Irish stereotypes.  We are all drunkards, of course, and willing to fight at the drop of a hat ("Getting his Irish up!" they say) unless of course, we become maudlin and start reciting poetry.   They even have a team named "The Fighting Irish!" but no one is talking about changing that team name, are they?  We are great musicians, of course, but only in fiddle-based country jigs.   And the Irish are great dancers - they just aren't allowed to move their arms, of course.  Oh, and like with Italians, we're part of the mob (or a mob). And we have 20 children.  And Leprechauns.

All are stereotypes and all are wrong and harmful. Yet to some extent, it is the Irish themselves, or at least Irish-Americans (which given our genetic diversity, almost anyone can lay claim to being these days) who perpetuate these stereotypes.   Tempest in a teapot?  Perhaps.

But consider this:  Imagine a holiday for African-Americans which uses similar tropes about them.  Stereotypes about music, dancing, dress, appearance, alcohol and drug habits. Instead of Guinness, the bars are serving Malt Liquor.  People dressing up as black and pretending to be black, while using it as an excuse to get blind drunk.  Instead of mascots like "Paddy O'Hara" we have Stepin-Fetchit, smiling at you from a plush doll for sale on the souvenir stand.

Or instead of a lucky Leprechaun selling cereal, we have a Mammy-figure selling pancakes.  Oh, wait, we already went down that road, didn't we?  That sort of illustrates two things, I think.  First, maybe getting all worked up over Aunt Jemima is kind of silly - particularly as her image as used on the packaging, has been updated over the years.  On the other hand, no one ever enslaved Leprechauns, although the Irish were exploited in other ways.  But the second thing is, I guess, that stereotypes are never helpful.

Of course, as I noted before about my Scottish Peeps being dissed, it helps when you are part of the dominate culture and own everything.   While the Irish faced discrimination in the early days, today, they are part and parcel of mainstream society. We can afford the stereotypes used against us.  Few kids will grow up today thinking, "I'm Irish, I should be a drunken lout - or a Leprechaun!" 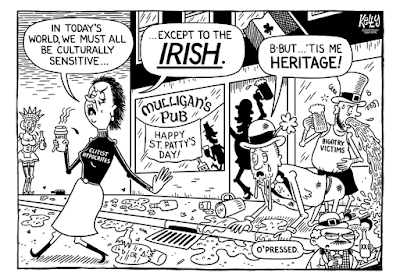