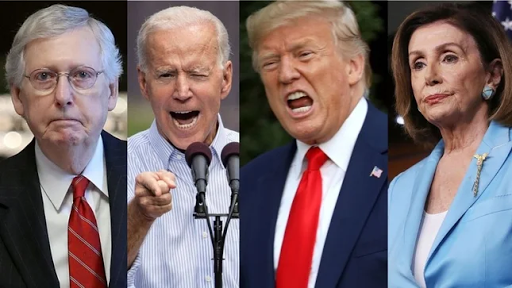 We were in a bar on Pine Island the other day.  Pine Island is - or was - the sort of place retired auto workers went to, when they spent their 25 years on the assembly line at GM and got a pension.  Of course, those were heady days - GM had a 50% market share and was the largest car maker on the planet.  As I noted before, GM's share is down to 17%, about in line with Ford, and now the #4 automaker in the world, perhaps #5 after the Fiat-PSA merger.   How times have changed.

Anyway, we are sitting at the bar, and these two Boomer couples are hooting it up over a video of Joe Biden slipping on the steps of Air Force One.  It was a deep-fake video, taking a real incident and exaggerating it.   Apparently those aluminum steps are kind of slippery, as many a President, from Ford, to Trump, and now Biden, have slipped on them.   To these Boomers, it was the height of hilarity - someone's failings - and a substitute for real political thought.  "You see, Old Sleepy Joe has lost it!" one said, to which I replied, "Watch while I drink my beer like Donald Trump!" and I held my glass in both hands, trembling.

Of course, Donald Trump doesn't drink beer - or any alcohol.  Something wrong about that.

What was funny was that these folks were running down "Sleepy Joe" not on any policy matters (indeed, they likely have no clue about such real issues, other that vague allegations that he is going to "take our guns away!") but on perceived age and infirmity.   I look at these four people, and they are all older than Joe Biden.  One has a hearing aid, his wife has coke-bottle glasses, and a third has a tell-tale lump on his chest for his pacemaker/defibrillator.  The fourth has the bump on his belly belying an insulin pump.  Oh, and like most Americans, they were of course obese.  Some fit crew!   But Uncle Joe - he's just out of it!

Anyway, they kept up this "HAW! HAW! HAW!" for 20 minutes and far longer than necessary - it just wasn't that funny a video.  They were trying to make some sort of "Trump Train" point - to intimidate other folks and imply that everyone prefers Trump, of course, even though he lost the popular vote twice and the electoral college once.  Oh, right, massive fraud.   That could have happened!

We took our drinks and went outside.  No point in hanging out with boorish retired assembly-line workers.  But it got me to thinking, maybe these sort of folks are the reason why we have the problems we have today - the divisiveness in politics, the unaffordability of homes, the lack of good-paying factory jobs.  You see, these same autoworkers - sucking the life out of GM, Ford, and Chrysler with their hefty pensions and health plans - were the same people who put coke bottles in the doors of the cars as they went down the assembly line.  These are the same people who went on strike at the drop of a hat back in the day - while already being paid 4-5 times the rate of non-union workers.  It didn't help that the salary workers basically gave up and milked the company for their share as well.

Crappy, overpriced cars were the result.  Vegas, Pintos, Chevettes, Novas, Camaros - all crap, and all outclassed by the primitive Japanese cars of the time, which did one thing and one thing well - lasted longer than the payment book.   So GM's share of the market dropped from 50% to 17% not because of "the imports" but because of these overpaid clowns.   Every foreign manufacturer has demonstrated that American labor, when not pampered with union contracts, can produce world-class products at a reasonable price.   We export cars from my hometown, but they are Hyundais, KIAs, Mercedes, BMWs, and maybe a few Suburbans going to Arab Sheikhs.

Back in their day - the post-war period until the 1980's - you could graduate from high school, go down to the Union Hall and get a job, once you told them your Dad worked in the same factory.   It was a pretty keen deal, but they screwed it up royally by holding the automakers hostage to crappy quality and high labor costs.  One by one, the plants closed, and parts production went overseas - and market share dropped.   The cushy deal they had was no longer available to their children, as those greedy pigs sucked up all the money they could without thinking of the next generation.

Today, even if you are lucky enough to get a job on the assembly line at an "American" car company, there are two retirees you are effectively supporting.  Oh, and you might be getting the raw end of a  "two tier" wage contract - making half of what your Father did.

Meanwhile, down here in Florida, your folks sit at the bar laughing at Biden and wondering why their kids are not as "successful" as they are.  "Kids these days!" they grouse, "Don't know the meaning of hard work!"  And they say this without irony.  The opportunities they had as kids are long-gone today, mostly because they thought that GM would never go bankrupt - or Chrysler twice.  They milked the system for all it was worth and then left their employers as a battered shell of a company with staggering pension and health care liabilities.  Damn Millennials!  Must be all their fault for buying those foreign cars!

And before you flame, please recall that I worked in General Motors Plants back in the 1970's and saw what went  on.   Numbers running, drug dealing, theft rings - and once in a while we made a car with most of the parts on it and half the frame bolts.   Don't understand why people want to buy those funny little Japanese cars!

But it got me to thinking that maybe the Boomer generation - of which I am tail-gunner charlie of - is to blame for our series of financial woes.  After all, our generation was the one that indulged itself in more ways than one.  We indulged in drugs and free-sex and gave the world the meth and opiate crises and HIV.  It was Boomers that gave us the dot-com bubble - and bust.  Boomers who lead us into wars in Afghanistan and Iraq.  Boomers who gave us the divisive politics we have today.  Boomers who decided, in 1989, 2008, and now 2021, that houses were made of gold and bid up the prices to the point where no young person could afford them - at least not the working-class young people.

Yea, them.  Those awful Millennials again, working "side hustles" in the "gig economy" because the college degree their Boomer parents exhorted them to get is basically worthless, yet cost $100,000 of which half they still owe.   But you know, we can't have the Millennials making good coin  - that would destroy the rate of return in the stock market for their parents!   We are eating our own young.

But there is good news, and I think of this every time I see a bunch of blowhard older people holding forth about how "Kids today are no good!"   They are all going to die soon.  In droves.  And CoVid is helping the process along.  Yes, the idiots at the bar I saw all were proud not to wear masks - ever - or get the "Microsoft vaccine" because the whole thing was a hoax.   They will shuffle off the mortal coil in the next few coming years, and it will change our world.

I read the other day that more than half of the people in the UK favor the Monarchy, but those that do tend to be older - far older - like 70 years old or so.  Among the younger population, support is about 30%.   This should worry Uncle Chuckles, as when he ascends the throne (if ever) he will be facing a constituency who is hostile to the whole concept of a Monarchy.  The world could change - and will change - very soon.  As I noted before, I may not agree with the Ms. AOC's of the world, but then again, it's their world now, and maybe we need to let them take charge.  You know, all that passing-of-the-torch to a new generation and all.

As Boomers keel over, a lot of wealth will change hands.  A lucky few, who have parents who saved money and paid down debts, may inherit a house or a share of a house and maybe part of an IRA.   Who knows?  They may even get a life insurance payout.   The impoverished Millennials may be in for a payday in the next few years - if their greedy parents don't spend it all, which I am quite sure most will do.

It also means our politics will trend younger, which is why the GOP is courting the young with online presences (and why they don't decry extremism which attracts 20-something while males).  TPUSA is the Hitler Youth of our era.   And don't just take my word for it, listen to the words of an up-and-coming youngster in the GOP: "Hitler was right on one thing that whoever has the youth has the future."

And maybe that is why both sides are desperately fighting for the hearts and minds of the next generation - with the Left promoting free college and guaranteed annual income, and student loan forgiveness, and the Right promoting the insanity of Qanonsense, which appeals to bigoted white male "incels" who blame feminism for their inability to rape anymore.

But that is what I thought, listening to these overfed and overpaid blowhards complain about "Socialism" and their own children ruining the world.  They needed to take a good long look in the mirror over the bar.   These folks can't die-off soon enough.  And this CoVid thing just isn't doing the trick.  Obesity, heart attacks, stokes, diabetes - the medical profession seems to be curing these faster than they can kill.

We need something more aggressive!  But as they say, time heals all wounds, and in the coming decade, my generation (the widest and last gasp of the baby boom) will hit the retirement age and cause a shortage of beds in retirement homes.  But shortly after that, they will die off, too, and there will be a lot of houses for sale, as well as used motorhomes, trailers, Harleys, and other toys accumulated by our generation.

If the Millennials can just hang in that long....