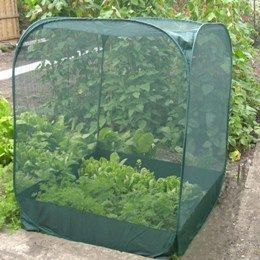 It is funny how we all copy each others' behavior.

We are in one of these resort trailer parks, where most of the people here are permanently settled in Park Models, and the next largest group is "seasonals" who come here for months at a time to get away from Northern winters.   A few of us are "transients" and are largely ignored.

What is always interesting to me about these trailer parks - all of them - is how people exhibit conformist behavior.  In this park there are a lot of rabbits, so someone figured out that if you buy a collapsible laundry bin from the dollar store and put your tomato plant in the collapsible fabric bin, it will keep the rabbits away.   Well, once someone figured that out, they all jumped in, and each campsite, or at least every other campsite, features one or more of these white collapsible laundry bins with a plant inside.  They even make pop-up "insect screens" (as shown above) for the same purpose, although I suspect they cost a lot more than the hampers sold at the dollar store.

It got me thinking, though - always a dangerous pastime.  These trends wash through the trailer parks on a regular basis.  Someone hangs a lamp from their awning made of an old milk jug and some Christmas lights, and before you know it, everyone in the park has one.   A while back, it was these "fascinators" which rotated slowly in the wind to reveal different patterns (one looking like the star of David).  These trends swell and ebb with time, and the "must have" trailer accessory one day becomes so much dumpster fodder the next.

And we all do this, too.  Whenever we are in a situation where we are not sure what proper behavior is, we look around to see what others are doing - the "normative cues" in our lives - and then follow that behavior.  Following the herd has a number of positive effects.  First, you blend in and are not noticed, which in a group situation can be helpful.  Groups turn on the outliers, regularly, so you don't want to be the nail that stick up (as they say in Japan) or you will be hammered down.

But also, even though the grass at the center of the herd is pooped-upon and trampled down, it is safer there, at least initially.  So if you go with group behavior, when in an unfamiliar situation, it may be a good move for you personally - at least for the time being.   Staying with the herd, however, rarely is profitable.

Herds can be stampeded off a cliff or wander off into the desert.   You "follow the herd" during an evacuation of a burning building, you may find yourself as one of the corpses piled up behind the locked fire door.   It pays to think for yourself, most of the time, even if the herd instinct is strong in all of us - and is there for a reason.

In the RV world, conformity is the norm.  Most RVs are built the same and look the same, and whenever a new design comes out, people view it with mistrust or think whoever buys it is a nutjob.  A few years back, the "A-Liner" trailer came out, which was like a pop-up but had hard sides that folded up to make an A-frame-like trailer.   At first you didn't see many, and the few you saw were owned by people who were.... different.   You know, hippies and those spry elderly people who go on hikes instead of watching one of the five televisions in their 40-foot 5th wheel, all tuned to Fox News.

But over time, they became more of a common sight, and eventually the Patent must have expired as other manufacturers started making them.   So they are no longer looked upon as "weird" or their owners viewed as possible Hillary supporters (yes, RV'ers can tend to be conservative, sometimes blindingly stupidly so).

Our current camper - and our last one - suffered from being "different" as they were made of fiberglass like a boat hull, and not of sticks and staples with a thin fiberglass or aluminum veneer on the outside.  The Casita was also viewed as "odd" because it was so small, and indeed, it does tend to attract odd people.  We've met folks who live full-time in a Casita, which if they were prisoners of war, would be deemed a violation of the Geneva conventions.   Tiger cages in Vietnam had more room in them.  But over time, the Casita people have made more and more of them, to the point where they are a somewhat common sight on the road these days, and viewed more like the A-liners, a small camper but not necessarily "weird".

But getting back to Monkey-See, Monkey-Do, we all fall victim to this effect over time, whether it is fashions, or music, or food, or television shows, or other fads or trends.  Some are good things to let into your life, others are merely value-neutral.  Still others are a waste of time and money, and yet others harmful to your very health and welfare.  Doing drugs, for example, is something that can start as a Monkey-See, Monkey-Do kind of thing.   I noted before, if you hang out with drug friends, you'll end up doing drugs.  And while pot might not kill you, when my friends started smoking crack and snorting coke, well, I had to walk away from that.   I wasn't going to "Monkey-Do" my life away.

Of course, we live on a retirement island and there is a lot of M-S, M-D going on.   For example, everyone has a golf cart, which you can drive on the road.  But many of our friends went out and bought golf carts and then promptly parked them in the garage, never to be driven.   They are so used to driving in the car, that using the golf cart seems, to them, to be odd.   Plus some have range anxiety, even though a golf cart with the weakest batteries can generally circumnavigate our island on one charge (and we have recharging stations all over the island).

We jumped on that bandwagon, but I was hesitant to spend $5,000 to $10,000 on some fancy cart from the Kart King or wherever.  We bought a well-used cart for $300 and fixed it up (total cost, about $2300 so far) and use it a lot.   We use our clapped-out golf cart more than many friends who have far newer and more expensive "buggies".   Why bother buying a golf cart just to clutter your garage?   Oh, right.  The herd.

I guess it is part and parcel of human nature.  Not something bad or good, just is.   In one of the neighborhoods on our island, everyone has an American flag flying in front of their house, by the road.  On trash day, it is funny to look right down the street and see the rows of American flags and recycling bins next to them, all standing at attention as if to salute, all perfectly aligned.  We make fun, but do you want to be "the guy" without the American flag or with his garbage "wheelie bin" at a cocked angle?  Of course not, which is why we are glad we don't live on that street.

Manicured lawns are also a normative cue and again, in some neighborhoods, it becomes a competition to see who has the best lawn.  Our street faces the marsh, so we don't look out at other people's houses or lawns.  Funny thing, not many people on our street have elaborate lawns, plantings, and whatnot.  But on the streets where houses face each other, it seems the lawn competition heats up.  I guess if you look straight at your neighbor's manicured garden, your sandy lot of weeds looks pretty shabby in comparison.   It is funny how we are motivated by these things.

Well, another "house moving day" is in order.   Time to hitch up the trailer and move on to a new place.  It will be interesting to see what all the folks there are doing in unison!   I am sure we will fit right in.