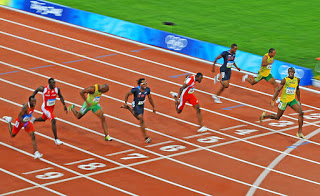 Leaving the mega-city that is South Florida, I realized that my behavior had changed in the short time I had been there.  I was no longer a relaxed driver, but like the rest of the lemmings, was flooring it to red lights and stopping at the last minute.  Stupid stuff, really.  But if you don't do this, the guy behind you will zoom around you, cut you off, and then slam on his brakes, so he can "win" at the game of traffic.

What drove this home to me was a trip to the Trader Joe's in Ft. Lauderdale.   There was a line outside, as they were only letting so many people into the store.  It wasn't a long wait - maybe a minute or two.  As we walked to the end of the line, Karen got out of her car and started sprinting across the parking lot to "beat" us to the end of the line and thus "win" at queuing.  So I sped up my pace a bit to get there ahead of her, and she sped up as well, to the point where towards the end, she was doing the 50-yard dash.  I still got there ahead of her.  I won.   Stupid.

But it made me think, how when you live in a crowded city where resources are scarce and it is hard to get ahead, that stupid games like this go on every day.  Traffic is bad, so you seek out the tiniest advantage - a car length - to "get ahead" of the traffic.   I saw this firsthand when I moved to Northern Virginia.  Coming from a more rural area, competition wasn't so fierce.  But in the city!  People drove like maniacs, and every little thing seemed like a competition - like getting on an elevator, or in the subway car.  It was stupid stuff, really.  Who really "wins" in getting a seat on the subway?  City dwellers will tell you this is deathly important.

What was really scary was how I quickly re-adapted to this mode of thinking.   Moving to Northern Virginia was depressing at first.  Everything seemed so expensive, and the competition for just about everything seemed fierce.  But within a decade, I had graduated from law school and opened my own law practice - owning a home of my own (with a swimming pool) as well as an office building in old town.  Not bad for a kid who came to town a decade earlier in an old Chevette and $50 in his pocket.  Funny, too, when I told my parents I would own a place in Old Town some day, they laughed.   When I finally did it, they sort of belittled the accomplishment.   Oddly enough, they are in Northern Virginia now - in Arlington..... Cemetery.

But maybe there is a method to this madness.  In the country, the light turns green and there are maybe one or two cars that go through the intersection.  You can take your time.  No hurry, no rush. But in the city, if everyone drove at that pace, no one would get anywhere. So ironically, even though people are travelling much shorter distances in the city than in the country, they tend to drive faster in the city. The faster they go, the more traffic the system can bear.  How odd.

But eventually, living like that wears on your soul.  I recounted before how winning in life is not necessarily coming in first place, but just finishing the race. The stress of "winning" all the time wears you out, which is one reason why, when we had the chance to escape from Fairfax County, we did so - and why I live on an island today, where the speed limit is 35 (max) and 25 in most places - and you can drive a golf cart on the road.

It is funny, but you can tell the "city people" visiting the island from the way they drive.  They tailgate and speed and try to "get ahead" but often don't even know where they are going.  So intent on "winning" the race of driving, they will pass you in a no-passing zone (almost killing a bicyclist in the process) and then a half-mile later, you see them by the side of the road trying to figure out the map.  Don't know where they're going, but they're making good time!   This on an island seven miles long, with only one major loop road.  Just keep driving, you'll reach every point on the island in a short period of time.

It is good to go away, as you realize how lucky you are to live where you are - well, unless you live in some festering city.   Once you do live in a city, as I noted in an earlier posting, you do find ways around, and perhaps your own quiet corner, as we did in Hollin Hall.  But to an outsider, it seems so noisy and busy and insane.

I guess that is the other thing I am looking forward to - less noise.  Being camped next to I-95 for several days was, well, noisy to say the least.  We are now at Faver-Dykes State Park (no, I am not kidding, that is the name of the place) and went for a nice kayak ride and enjoyed the deafening silence for the first time in more than a week.