Tennis, Anyone? (Sports That Have Fallen From Favor) 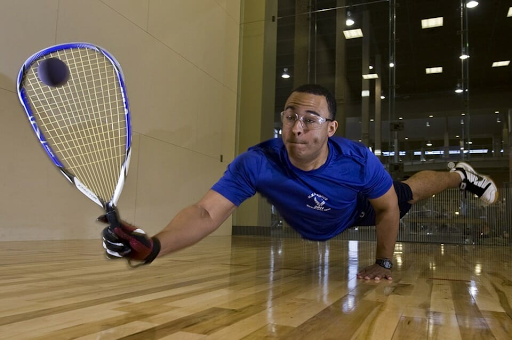 Sports rise and fall in popularity.  Why is this?

Sure, there are the costs involved. As the author pointed out, Racquetball required a Racquetball court, which meant you had to join a club and pay dues - or sneak into an apartment complex, as he did, later on when the clubs closed.  Golf and Tennis suffer from a similar problem - you have to have access to a court, plus the equipment is not cheap, either.

But I think the main reasons go beyond that.  The lack of unstructured leisure time and the competition from other leisure activities are the main reasons these sports fell from favor.  I mentioned before that my parents' generation all played Bridge - a complex card game that takes a long time to learn and an even longer time to get good at.  No one in my generation plays it - not like my parents' generation did.  It was everywhere back then, today it is nowhere.

(Mahjong is another game quickly falling from favor.  When we moved to the Island 15 years ago, there were three "Tongs" playing different rules.  Today, there is one, and I am not sure it is as well-attended as in recent years).

The game of Contract Bridge was created by a bunch of rich people killing time during an ocean voyage.   Today, people just don't have that level of unstructured time.  Not only that, people are more likely to play an electronic game in their home - something with more action and technology that a boring card game.

I think racquetball, golf, and tennis have suffered as similar fate.  Here on our island, our golf courses are largely empty most of the time, and falling into disrepair.  The big money-maker for the island is our small water-park with big slides for the kiddies. The golf course loses money, consistently.  Not only are there fewer players, there are far more competing courses that were overbuilt in the area in previous years.  They are talking about eliminating one whole course (we have three 18-hole courses and a 9-hole executive course) and putting in senior housing.  The tennis center was finally renovated, but if you want the court to yourself, that is still not a problem.

Perhaps it is also the emphasis in high school sports on major team sports - baseball, basketball, and particularly football (which is a recognized religion in Georgia and much of the South).  Maybe they still have a golf and tennis team in the local high school.  I know at my school, that wasn't as popular - the kids who went out for that tended to be more intellectual and upper-middle-class.

My Dad was a big tennis nut.  I never could play the game, having 20-200 vision.  Any kind of fast-moving ball might as well be invisible to me.   If I ever hit a baseball with a bat, it was by sheer luck.  I tried taking tennis lessons, but I was never able to play the game very well.   If you think about it, it is a very difficult thing.  The ball comes over the net and you have to make a split-second decision whether it is going in-bounds or out.  If in, then you have to figure out how to position your body, whether to hit it forehand or backhand, and then try to hit it so your opponent will miss it - without going out-of-bounds again.  Maybe that was the problem for me - I was over-thinking it.

But if tennis was too fast for me, Racquetball was ten times faster - and handball ten times faster than that.  I admire folks who can play those games well, but I realize I never will be one of them.   And it is sad that these games seem to have fallen from favor lately.

The author of the article cited above says that he now plays Pickleball more these days.  Pickleball is a game favored in retirement communities like The Villages, where unused or underused tennis courts can be readily converted to Pickleball courts.  Pickleball uses an inexpensive wooden paddle, and a hollow ball with holes in it - like a whiffle-ball or a golf practice ball.  The idea is to slow down play, which is why it is popular with the elderly set whose vision might not be as good as it used to be.

So you see, that might be another reason for the decline in more traditional sports.  People are getting older and no longer have the stamina for 18 holes of golf, or the coordination for high-speed ball sports like tennis or racquetball.  It might also explain why things like golf were so popular a decade ago - when the baby boomers were in their retirement prime.

But a bigger part of this is, I think, that young people don't want to play the games of their parents so much. Golf had a brief heyday in the 1990's and early 2000's, only to fall from favor in the last recession.  People simply don't have the time needed - hours of unstructured time - to play 18 holes, plus the countless days, weeks, and months to learn the game.  Throw in the hundreds, if not thousands spent on equipment and greens fees (or club memberships) and it isn't hard to see why the game has fallen from favor.

Maybe our generation just wants to play different sports.  Jogging and running, for example, were not big things when I was a kid - my parents did not "jog".  That became a "thing" in the 1970's and today, everyone claims to be a marathoner or half-marathoner, at least from the number of "13.1" stickers I see on the backs of SUVs.  My parents viewed bicycles as children's toys, suitable for sidewalk use or maybe delivering newspapers - something you chucked the moment you got a driver's license.  Today, everyone thinks they are Lance Armstrong, with all that implies.

Again, I think the video game has taken over - and we have become a more sedentary species as a result.  We are not as athletic as the previous generation - and obesity is now an epidemic.  We all have jobs now that force us to sit in front of screens all day.  And when we get home, we relax in front of another screen, playing a video game or watching some television show.

Will these older sports come back, or will they merely die off?  Hard to say.  Perhaps a new generation will see these little-used tennis courts and golf courses and take up the sport.  On the other hand, without some exposure to them as a youth, it isn't clear how they could take it up.  The ascension of Tiger Woods gave many hope that golf would stop being a game only of the country club and the well-off.  And in a way, it already was - the best golfers are not the executives and rich folks, but the union electricians and plumbers, who have the beefy arms and the thousands of dollars of golf gear in the back of their pickup trucks - who are on the greens at 3:30 in the afternoon, while young lawyers are in the office until 9:00.   Of course, those union jobs have sort of gone away, haven't they?

And despite the rise - and fall - of Tiger Woods, I don't think the inner-city kids are going to take up the sport in record numbers.  Sports like basketball are popular in the city as they don't require much in the way of equipment - a ball and a hoop and a flat place to play.  Golf requires a lot more land - and a lot of expensive equipment.  I doubt that inner-city kids are going to take up fly-fishing, either - another sport that requires a lot of time and energy, space, and expensive equipment, which is also in decline in recent years.

The decline of the leisure class combined with our sedentary lifestyle is a real one-two punch for these sort of time-consuming and money-consuming games.  The fellow exhausted from a day stuffing boxes at Amazon isn't stopping off at the public golf course to practice his chip shots.  He's going back to the RV he is living in and watching television until he falls asleep.   We have squeezed a lot out of the working class, and the results are somewhat predictable.

I have mentioned this before - concentration of wealth in the hands of too few works against the wealthy.  When no one can afford to buy your products, your business will suffer.  Trump's golf clubs will go under if no one has the leisure time and disposable income to learn and play the game.  Our economy does its best when we have a robust middle-class with the time and energy to do things, other than work.

Maybe that is why no one plays Racquetball anymore.

NOTE:  Please spare me the flames from folks who will say, "Well, I still play Racquetball" or "I still play golf!"  or "I play bridge!"  That's missing the point.  The reality is, as the author of the piece linked above notes, there are far fewer venues left and far fewer players of all of these sports and games.  It ain't like the 1950's for Bridge, the 1960's for Tennis, the 1970's for Racquetball or the 1980's for Golf.

So please, go troll somewhere else.