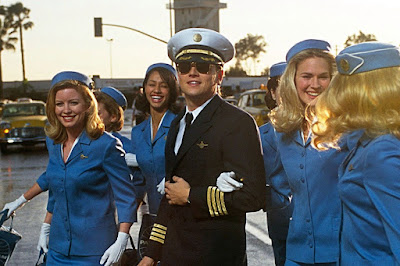 Airlines made a lot of money from business travelers.  Will this ever return?

Ah, for the glory days of jet airline travel - from the early 1960's to the late 1970's.  It was a heady time.  If you watch "Catch Me If You Can" you'll get an idea of what it was like back then.  And the movie is not too over-the-top in terms of how things were.  Imagine going to the airport, dressed in a suit and tie.  The airports were all new, and not overcrowded.  The airplanes were all new, too.  Eastern Airlines "Whisperjets,"  PanAm "Clippers," and the gold tails of Continental airlines.   Sipping cocktails in the American Airlines Admirals Club at O'Hare.  I was there.  It was fantastic.

Part of the reason was regulation.   Airlines were told by the CAB (later FAA) what routes to fly, how much to charge, and what equipment to use.   Most planes were flown half-empty (or half-full, if you were an optimist).  And the cost of a round-trip ticket was about equal to what you'd pay for an older used car in running condition.  As a result, the airports were not crowded, nor were the planes.   The hoi-polloi weren't allowed in those hallowed halls with their sweatpants and greasy t-shirts.  It was a glorious time.

Pilots back then were Gods, not bus drivers.  A friend of mine is a pilot for cargo jets.  We watched with amusement as a young woman in yoga pants was hitting on him the other day - he exudes that pilot mojo, apparently.  I am not sure his wife would have been too happy about it, but then again, she's probably used to fending off strays.  After all that's probably what attracted her to him in the first place, right?   Today, maybe this is less the case, as the job of flying airplanes becomes more of pushing buttons, which can turn out to be a bad idea when the buttons break, as we have seen in recent years.

I recall back in 1977, flying in a 727, complete with built-in rear airstairs, from Syracuse Hancock Airport, to Hartford's Bradley International Airport and being one of maybe 2-3 people on the plane, other than the crew.  I think we stopped in Albany on the way - it was like a Greyhound bus, stopping on a route mandated by regulations.  On that last leg, I believe I was the sole passenger. On one occasion, they held the plane for me and paged me at Hancock Airport, as I was late for the flight.  Since there were so few passengers, they felt, well, might as well wait.

But all that changed - for the better and the worse.  Airlines and trucking companies (also regulated in a similar manner) were deregulated in the waning days of the Carter administration (which Reagan and the GOP took credit for). The cost of fuel had skyrocketed in the 1970's and many argued that deregulation was necessary.  Of course, the result was airfare wars, the rise of small independent (non-union) airlines and the slashing of fares.  A lot of airline employees lost their pensions. One by one, the legacy carriers went bankrupt, merged, and morphed into the few remaining carriers we have today.  A lot has changed.

Today, we fly on planes that are older than many of the passengers.  Airports are overcrowded as are the planes, which are routinely overbooked.  A full flight is now the norm, not an anomaly.

Well, it was, anyway, before CoVid.

Back in the day - the early 2000's, I made a monthly reservation on United to fly from Washington DC to San Francisco.   I figured out, early on, that if I booked the flight round-trip from San Francisco to DC, "staying over" four weekends in Washington, the airfare was far less.   The thinking was, if you flew out on a Monday and returned on a Thursday, you were a business traveler and should pay top dollar.  But if you stayed over the weekend, you were a tourist, and could only afford so much.  By reversing my reservations, I was "staying over" as a "tourist" in my home town for four weekends, which allowed me to fly out and back to the coast during the week for the princely sum of $200.

United claim they were going to put a stop to that, but never did.  And of course, it meant that I "threw away" one-half of the first ticket I bought, and the last - years later - when I finally stopped flying out there.   And of course, I quickly realized that BWI and Oakland were cheaper places to fly to.  I had it down to a system.  Since my clients weren't paying my airfare, I cut costs to the bone, and racked up frequent flyer miles, which allowed me to upgrade to business class on most trips.

But over time, the face-to-face meetings became less and less important.  We could do things on the phone, over the internet, and through these newfangled things like "Skype" and whatnot.  Say, whatever happened to "Skype" and why did "Zoom" sort of take over their space?   Interesting thought, and something that should give Zuckerberg pause.  What is hot one day on the Internet is not.  I still have a sticker on one of my laptops advertising it is "Skype compatible!"   How quaint.

Business travel drove the whole system back in the day.  "Frequent Flyer Miles" weren't a come-on to sell credit cards, they were a bribe to business travelers to get them to be brand-loyal to an airline.  The idea was, you'd book your business travel through United, and then accumulate enough miles to fly the whole family to Hawaii next Spring.   And back then, you could, as half-empty airplanes had plenty of seats for "free" customers to take.   It was a nice perk of being a business traveler, and at one point the IRS was talking about taxing these miles and the government was trying to force employees into coughing them up to Uncle Sugar.

Today?  Well, the airlines seem less concerned with who is flying, so long as the seats are all full.   Sure, they still use an arcane pricing structure so that no two seats in any airplane have the same price.  You want to book at the last minute, first-class, you pay a premium.  You want to book a month in advance, using super-saver fare, with no luggage, you get a deal.   But every seat has a butt in it, and flying is no longer so much fun.

CoVid has killed off a lot of businesses that perhaps were ready to die.  A lot of forgettable chain restaurants are filing for Chapter 11 bankruptcy and closing locations as people realize they really didn't need to eat a fatbuger with fries and pay $27.50 with tip for the privilege.   People are also realizing that it is just a lot easier to order stuff online than to spend an hour driving into to town to rummage through stores trying to find things and then settling for "what they got" in stock.  These sort of trends were already in the making - the death of "brick and mortar" has been well-documented.  The pandemic just accelerated these things.

Many people are predicting a huge rebound - and it might happen, too.  People need that personal contact and personal experience.  Maybe the cruise lines will see a huge resurgence.  Maybe people will flock to Disneyworld again to stand in line with a lot of sneezing snot-nosed booger kids.  Maybe being locked into an aluminum tube, breathing the same stale air and farts of 200 other people of questionable hygiene will become a "thing" again.  Maybe, maybe not.

We are creatures of habit, and habits are hard to shake.  Back in the 1980's attendance at our little island declined precipitously.  Low-cost airfares to Orlando meant that "family vacation" could be a trip to Did-ney, and not some lame beach on the coast of Georgia.  Instead of a six-hour drive to brown water, you could fly to sandy-white beaches in Ft. Lauderdale, for about the same amount of money.

But in recent months, people are taking to driving again.  RV sales are through the roof, and our little island is being over-run with tourists who want to get away from it all, rather than be crowded into a tourist destination.   We are the home of splendid isolation, and people are starting to appreciate that - and seeking it out.

We've been coming here since about 1990.  In the late 1990's, we made an offer on a house, which fell through.  Mark wasn't so sure we should buy here.  "It's kind of creepy and quiet" he said.  "Yea, isn't that great??" I replied.  After 9/11, the anthrax scare, and the beltway sniper, "creepy and quiet" started to look appealing.  The charm of the big city wore off.  I suspect CoVid is doing the same to a new generation of folks - who can afford to leave.

The point is, our habits have changed, and I am not sure that it will "snap back" to pre-CoVid behavior, at least not overnight.   Sure, airlines will see increased traffic in the coming months - they already are.  Disney has reopened, as have restaurants and bars - in some parts of the country.  Slowly, over time, things will go back to "normal" but I suspect it will be a new normal.  If we do go back to the old ways, it will take a long time to do so.  Leisure airline travel may not come back so fast, if people get out of the habit - and discover new habits.

But will business travel rebound so quickly?   I wonder.  So much of business travel was a boondoggle.  A chance for "face to face" selling by salesmen (and maybe a chance for an under-the-table bribe, or maybe setting up the purchasing agent with a prostitute).  You laugh, I've seen it happen, firsthand.   Business conventions were historically a time to trot out new products, and to get fabulously drunk -and again, prostitutes.   But were they really the big sales "gets" that people claimed they were?  Sure, the company would announce a big sale with a big customer at the big convention - but in many cases, that big sale was really closed before the convention started - or would have closed in any event.  It is hard to say - I am sure the die-hard salespeople would disagree with me.  Kind of hard to hand someone a suitcase of cash over Zoom, ain't it?

All I know is, that in the few years before I retired, I stopped traveling for business.  Clients realized they could contact me by phone or over the Internet, and the need for in-person meeting declined.   Granted, there was something about "being there" that made a difference.  If I was in the office of a client for a couple of days, they often would throw more work my way. "While you're here, can you look at this case as well?  We've been having problems with the Examiner..."   That sort of thing might not occur, if you are in on a Zoom call.  It is, of course, hard to say what could have happened or not.

I suspect that we will see a long hard haul for the travel business in the near future.  The stock market seems to think otherwise - wishful thinking, perhaps.  We will all be inoculated (I have an appointment for March 8th) and immediately jump back on an airplane to fly to Disney and then go on a cruise - those of us who still have a job or money, that is.

I think maybe people are being a little overly-optimistic.  But perhaps that sort of optimism is the good part of humanity.  We'll see!