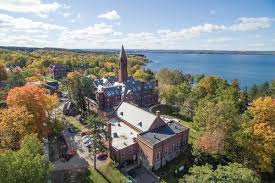 You can put butts in the seats by cutting tuition by two-thirds.  This is not a sustainable model, however.  And what does it say about the real value of the education you are providing?

A recent article online says what I had predicted back in 2010 - that small colleges are going to go bankrupt as the product they are selling is antiquated and increasingly worth less (or almost worthless) while costing more and more.  Of course, I am no great prognosticator - if you predict enough things, one of them will end up being "right" or you can claim it was right.  But also the writing was on the wall, with the steady drone of articles about student loan debt and the number of college graduates that cannot find jobs, after majoring in agitation studies.

The article about Albion college made me sad.  The leadership there has no clue about the bus that is about to run them over.  To attract more students, they slashed tuition, decreasing their income by 2/3rds, and set out to attract more minority students.   Sounds like a for-profit college to me - attract minority students and then saddle them with student loan debt and hand them a worthless diploma.   Great business plan!

A lot of these little schools started out as women's colleges or minority colleges or regional colleges.  Wells College, in Aurora, New York, near where our vacation home was, was started by one of the founders of Wells Fargo, so his daughter would have a place to go to college.  Back then, young ladies were expected to get married, but if they insisted, could first go to school to study the great authors and learn Greek, before they settled down to a life of washing dirty diapers and being beaten by their husbands.

Over the years, such colleges survived, even though their tuition costs were some of the highest in the land.  Kids from wealthy families with middling grades would attend such schools, to park for four years and get a B.A. in literature.  And back in my parents' era, maybe that was enough to get you a job "in industry" or high finance or even government.  A college degree was a college degree, and outside of the professions, no one really cared much what you studied, so long as you could prove yourself through study and also identify yourself as one of the upper classes.

All that has changed.  Some small colleges are hanging in there.  Wells College has Pleasant Rowland as an alumni - who sold her American Girl dolls to Mattel for nearly a billion dollars (take that, Barbie!).  So long as Pleasant props up the school, they can stay in business.  Albion college, profiled in the article, is tapping into its $175M endowment, which you can't do for too long before you run out of endowment.  Some observers give the college only a few years before they will be forced to close their doors as they run out of money.

What is interesting about this trend is how it largely is going on unnoticed.  The number of high school graduates is declining, forcing schools to compete for admissions.   Many are offering perks like luxury student housing, rock-climbing walls in the student center, and in some cases, perhaps even a valuable education.  Others are going full-on party school, offering degrees in LGBTQ studies or African-American studies or other fields for which there are limited openings.  Albion college, for example, as profiled in the article, hired one of its alumni as "director of belonging" to help with the transition from an all-white school to a more diverse student body.  It illustrates the fallacy of so many of these degrees - they serve only to qualify you to teach others to get the degree in question.

Sort of like my hippie brother with his Doctorate in Puppetry.  He was fortunate to find the one job in America that required that credential, and is now teaching and running a puppet museum.   Good thing it worked out for him, although he did have to struggle for many years, and the staggering cost of the education - I wonder if it every paid back?   Others are less fortunate - if you get a degree in psychology and have crappy grades, you really can't go anywhere with it, without an advanced degree (which will be hard to get if you barely scraped by in undergrad).

It's even worse if you drop out - you owe all that student loan money and still have to pay it back, without the credential that supposedly will get you that big-paying job.   Funny thing, that.  As a dropout from General Motors Institute, I had no trouble getting a job at Carrier - who were impressed not that I dropped out, but that I was admitted to such a program.  Some fields of study are more rigorous and difficult - and more useful - than others.

What we are seeing is a major realignment in our educational system, which is antiquated.   High School, once rigorous and difficult, has been reduced to adolescent day care.  In my grandparent's era, graduation from high school was not an easy thing - you had to know two languages, one of them Latin, and several years of mathematics, chemistry, physics, literature, writing, and so on.   High School back then was harder than college today.

Today, college is the new High School and slowly turning into more adolescent day care, as we park young people for four more years of partying before we turn them out into the world, where many fall flat on their faces, unprepared for the realities of an unforgiving society, even as they had a decade or more to prepare for it.  Part of this problem is that these youngsters are getting bad advice - outdated advice - often from people who profit from the bad decisions of young people.  The college Dean isn't going to suggest that maybe a liberal arts degree isn't a cost-effective proposition.

And sadly, it seems that the Dean of this Albion college doesn't understand this - wanting to "change" the college without actually changing anything.  It is not that education-for-education's sake is a bad thing, provided you can afford that.  In an earlier time, where a leisure ruling class existed, college was a good place to park your kids.  It was also a good place for strivers, like my Parents and Grandparents, to try to move up the economic ladder.  Of course, my Grandfather studied finance and law, and became a successful banking lawyer.  My Dad went to MIT and although he transferred to the Sloan school of Management, the education he received did line him up for a job.   My Mother got a Master's in Library Science, which, if she had decided to become a Lesbian spinster instead of an alcoholic Mom, would have set her up for a good gig as a Librarian or researcher somewhere - not high-paying, but a job.

My siblings' degrees in Liberal Arts turned out to be less useful to them, and all had to go back to school to get graduate degrees to qualify them for a job.  The old model of degrees in "general studies" is outmoded.

Or maybe that is the new mode.  Maybe Bernie Sanders is right - God Forbid!   Perhaps since people are living a decade or two longer than 100 years ago, that young people need to stretch out High School for eight years, before deciding on a real field of study.  If so, then indeed, College should be free - and worth every penny you pay for it.

That is the fundamental problem with the Albion model - by cutting tuition by 2/3rds, you are exposing what the real value of your education really is.  It is not that their new minority students "cannot afford" the standard tuition, but that the standard tuition is, like the "sticker price" on a car (or a Boeing aircraft) just a joke - a marker or talisman of a price that no one pays unless they are desperate.

Perhaps there is another way - a third way.  Perhaps "education for education's sake" can also be combined with "learning something useful" that will lead to employment after graduation, which in turn will insure that future alumni will contribute to the endowment of the school.  The problem with the Albion model, is that by graduating low-income students with liberal arts degrees (and student loan debt) few will be able, down the road, to donate money back to the school.  I get regular pleas from Syracuse University to send them money, something I was loathe to do while paying back student loan debt.  Well, that and how they overly-rely on NCAA sports to fund the place.

Yea, don't get me started on that - how our educational system was hijacked by professional sports, to create a series of "feeder" leagues, starting in High School and going on to College, where athletes are paid nothing and the schools rake in the dough - and education becomes only an excuse to host an entertainment franchise.   That is why the bigger schools will survive, as they have the name recognition, often based on the sports teams.   I don't know how many job interviews I went on, where the interviewer, when he saw Syracuse University on my resume, talked about Coach Boeheim, but nary a mention of the Engineering program.  When I went to GWU, they hired a new Dean, who made it a priority to create a Division-I basketball franchise, using our tuition money to build it.  And yes, in subsequent job interviews, not much was said about the quality of the law school, but hey, how about those Colonials?

So where does this leave us?   Same place as in the rest of our postings.   We can rail against the unfairness and inefficiency of it all - how the whole education system is "broken" and needs overhaul, but that would be externalizing.   Odds are, if change is going to occur in our educational system, it will take years, and the bankruptcy of these small colleges will be part and parcel of the process.   In the meantime, we, as student-consumers, can still seek out the best educational value for the dollar, and borrow as little as possible in the process.

And yes, this is possible to do.  So many of the "sob stories" you read on the Internets about college costs, usually profile a post-grad student who has run up obscene amounts of debt, but never worked while in college and never made much of a sacrifice, either.  Give up luxury student housing?  Go to a cheaper school?  Not have a brand-new car?  Study something useful?   No, just have the government bail me out when I graduate, and then pay me not to work!  What the heck are they teaching in school these days?

Note that like so much else in our economy these days, CoVid is the nail in the coffin for failing businesses.  Maybe brick-and-mortar storefronts would have survived another few years without the pandemic.  Maybe it would have taken people that much longer to realize you can order office supplies online, as opposed to driving to Staples, for example.   CoVid didn't put these places out of business, it merely accelerated what was a process already in motion.   I suspect the disruption from CoVid will do the same for these small schools.  As the article noted, one big source of income for the school was in dorm and  cafeteria fees.  Educational institution or Motel 6?  Not much difference, it seems.