The Path of Least Resistance (He Did The Best He Could) 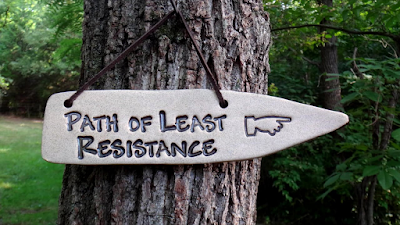 We all follow the path of least resistance, at least sometimes.

I was thinking the other night - a dangerous preoccupation of mine - about a friend of mine who was commiserating about their parents, who were, to say the least, a little weird.  I understood where he was coming from, to say the least.  Anyway, he was trying to rationalize it all, and said "Well, I guess they did the best they could!" which is a phrase I hear a lot when people talk about folks who fail to live up to expectations.  They can't help it.  They did the best they could under the circumstances.  I guess they had to rob that liquor store.  You know how it is.

And in fact, by trying just a little bit harder, we can often improve our lives greatly - to the point where the rewards far exceed the effort involved. On the other hand, the path of least resistance leads to nowhere.  Every major religion sort of teaches this theory.   The Catholics, with their "Seven Deadly Sins" proscribe "Sloth" as being evil. Loafing around, doing nothing, taking the path of least resistance - it is all-too-easy to do, and while it seems like the path to happiness at the time, it often is the path to depression and misery.  Is the old good-versus-evil, Heaven-versus-Hell.

But that is a funny thing about humans.  We want to take the path of least resistance - or at least what appears to be the easy way - and that seems counter-intuitive in terms of a survival skill.  As complex beings, we don't just hunt and gather anymore. We farm crops, raise livestock, build shelters, make clothing - all tasks that require work that doesn't necessarily show an immediate reward.  The caveman who prepares and stores food for winter, lives to survive for another year.  The one who just goofs off, starves to death in the cold.

Or does he?  That caveman might just steal the stored food from the industrious caveman neighbor and end up surviving long enough to reproduce. Or perhaps the industrious caveman's wife thinks the slacker is a glamorous "bad boy" and is seduced by him, on the sly.  Maybe the playboy caveman doesn't survive the winter (or the spear thrust through his chest by other angry cavemen) but his DNA lives on.  And maybe that is why we have strivers and slackers in this world.  We have people who settle down and build farms and raise crops and create villages and even cities.  On the other hand, we have gypsies, moving from place to place, stealing what they can to survive for the day and not caring much about long-term thinking.

An interesting thought - at least to me.  And maybe today, we have far too many of the path of least resistance people, and far too few of the motivated folks who are willing to work toward far-off goals. We have a whole generation - it seems - whose mantra is pay off my loans, give me free money, and make college free (and guarantee jobs, make rent free, and so on and so forth).  The path of least resistance is a popular one, today.

In my own life, I have followed both paths - probably the path of least resistance moreso than I should have.  When I was a kid, I was pretty depressed - with a home life that was, well, insane quite literally.  I was bullied in school, and while I was above-average in intelligence, I could have gotten better grades than I did, mostly because of depression - and drug and alcohol abuse.  The path of least resistance seems appealing, when you are depressed.  But often, it leads to more depression.

I followed that path for a decade or so, before one day I woke up, as if from a dream, and had one of those "As God as my witness, I'll never be hungry again!" moments.  I realized that if I was to have any sort of life, I would have to get off my ass and make it for myself.  No one was going to hand me free money or pay off my debts.  It would be hard, it would be daunting, but it would be worth it.

What followed were some of the happiest days of my life.  I still had little, of course, although what little I had was pretty decent - a place to live, a car to drive, and a bicycle to ride.  I also had a job - several of them in fact.  I did everything from delivering pizzas, to working at Planned Parenthood, to tutoring calculus, to working at United Parcel, to delivering phone books - in addition to my regular job at Carrier.  It was hard work, and I went to bed exhausted every night, not from a cloud of marijuana smoke and cheap beer, but the relaxing exhaustion that only comes from a hard day's work.

It would have been easier to just keep my head down, keep my regular job, party with my friends on the weekend, and do little else. I shudder sometimes to think what would have happened to me - the factory eventually closed, and I would have to live with odd jobs or whatever, trying to scrap together a few dollars for some pot and fancy rims for my car.  It was not a good way to live.

But we all have choices, which is the best thing about America. We just returned from the grocery store, and the "path of least resistance" is well-evident there.  The end-cap displays were all for high-fructose soda pop and chips and snacks of various sorts. The path of least resistance was not hard to find - it always is, by definition, the easiest path to take.  But the cost of the snack foods, in terms of dollars, and in terms of long-term impact on your health, is very great. Take the easy way out, and you'll find yourself in trouble later on.  Maybe vegetables and fresh foods are harder to prepare and harder to find (and it takes some education as to what to look for and how to prepare them) but the long-term payback is far greater than the short-term rush of junk food.

But you have to make the better choice - the one that has delayed gratification, not the instant gratification and carbo-rush high of the snack food and soda pop.  We all have choices to make, and it is liberating to be able to make your own choices, but as part and parcel of this, we are also free to make bad choices.  Some argue that the government should protect us from bad choices  - or make choices for us. But if we go down that path, they really aren't choices anymore, are they?  Of course, the government already makes choices for us these days - there are some things too important that we can't just let people take the low road.  No, you can drain your used engine oil into the wetlands.  And yes, energy independence is a national security concern - so the government tells us how many miles per gallon we should be getting - and fines us for getting too few.

Motivating yourself to do better things isn't easy - it is hard, probably the hardest thing there is.  Quitting drugs and alcohol and going back to school, and then to law school, wasn't hard.  Deciding to do these things, was.  Once I made the decision and went down that road, it sort of bootstrapped itself.  Better things started happening to me, not all at once, but over time.  Funny thing, too, people want to see you succeed in life, provided they see you are making the effort to improve yourself and not just taking the easy way out.

Of course, many people take this sort of thought the wrong way - that somehow you can "think your way to success!" by thinking positive thoughts (books and seminars galore promote that nonsense).  No amount of "Successories" posters will change your life, to be sure.  And wild dreams that are impractical, are not the answer to anything.  Plans that are sure to fail are just as much the path of least resistance as doing nothing.  Buying into an MLM scheme is just squandering what little energy you have.

It is also important to realize that we all take the path of least resistance, from time to time, as no one is perfect, or even close to being perfect.  Human efficiency, in my estimation, is in the low single digits - 1-2% on a good day. Often far worse on others. So it makes no sense to beat yourself up for not studying medicine in your spare time or not learning how to split the atom in your basement.

On the other hand, I think that this "He did the best he could" slogan is little more than a cop-out.  It reminds me of a comment a sardonic friend of mine once made about the trend among overweight gays to call themselves "bears" and just accept morbid obesity as a lifestyle.  My friend said, "This whole 'bear' thing is just another way of giving up!"   And maybe he has a point.  It seems that today, unhealthy lifestyles are embraced, under the rubric that "body shaming" is akin to racism or sexism.  Calling someone "fat" is akin to tossing the N-word at them.

It seems on a number of levels, people are taking the path of least resistance and then crying they are victims and can't help it.  Whether it is drugs or the need to take an "emotional support animal" on an airplane, everyone wants the easy way - and the rest of us have to suck it up.  Someone goes to Party U, studies something idiotic and gets shitty grades and now can't get a job - he's the victim, and the rest of us have to pay for his four-year hangover.   Yes, even going college, which seems like the hard thing to do, is often the easy way out, particularly if you take the easy courses and don't think about the long-term consequences.

I could go on, but you get the point.   As a nation, we have become fat, bloated, and lazy, (and in debt) and cry that we are victims of greater powers and nefarious schemes.  It is the easy way out - far easier than looking at our own actions and figuring out what we did to get ourselves in the situations we are in.   No one wants to do that, because it is hard - the hardest thing you can do, in fact.

But once you do that very simple thing, oddly enough, everything else becomes much easier.

The alternative is to be the guy who everyone says of, "He did the best he could!"