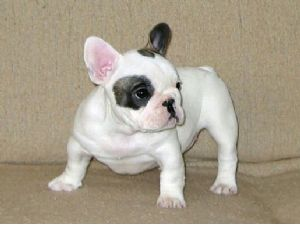 There is a difference between a status symbol and a pet.

I wrote before, a long time ago, how my debit card was stolen as part of a complex scheme that involved selling French Bulldogs over the Internet.  My debit card was a small cog in the game - paying for online ads on a website in Ontario, Canada, to sell non-existent dogs to people who would wire money to Mineral Wells, Texas, where locals would be roped in as "secret shoppers" to act as mules to launder the money before it was sent to Russia.  Geez, for all that effort, I would think you could just have a regular job, eh?

But it got me thinking, at the time, about how some people view pets not as loving companions to share their lives with, but as objects to own to impress other people.  Now that I think of it, many folks look at spouses the same way.  Melania?  Is that you?

What drove this home to me were some recent articles about thefts of designer dogs.  In one incident, a delivery driver scooped up the family pet and "stole" it from their owners.  In other incidents, French or English bulldog puppies were stolen from their owners.  It defies logic, in my mind, why someone would want to steal someone else's pet - other than the mentally ill pet hoarder, who thinks they are "rescuing" an animal, instead of stealing it.

I realized that to some folks, having a "designer dog" or other pet isn't a matter of having a loving animal to care for, but to have a status symbol.  French Bulldogs are expensive - a puppy (inbred from a breeding mill) can cost thousands of dollars.   But you won't find them on the end of a leash on Rodeo Drive, but rather on the end of a chain, attached to an engine block, in front of a run-down trailer home.  Yes, the very poorest in society covet status symbols, and this includes designer dogs.

Part of this is the culture of belligerence - and as a result, the sort of pets favored by the poor tend to be vicious ones - attack dogs, guard dogs, fighting dogs - as well as carnivorous or "exotic" pets, such as large snakes and carnivorous fish.  I bought a kitten once, at a pet store, for 99 cents, not realizing at the time, that they were being offered as food for snakes.  Speaking of exotic pets and white trash - "Joe Exotic" - end of story!

But having an expensive or "desirable" pet is also part of it.  It is the idea of obtaining the unobtainable - which is why it is so easy to sell "collectibles" to the poor, whether it is Beanie Babies or Cabbage-Patch dolls.  The poorer a person is, the more they crave status symbols.

It always floors me that people talk about getting a pet and then talk at length about what brand of pet to get - and that is all breeds are, brands of pets.   They are less concerned about the character and nature of the animal than with having the latest-and-greatest brand of pet.  So they get a Rottweiler or a Pit Bull or a Jack Russell terrier and find out their temperament is anything but calming.  In some instances such pets are merely annoying - eating your shoes or your sofa.  In other instances, they eat small children or even their owners.  Small price to pay, I guess, for status.

And that is all these sort of dogs are, is status symbols - expensive status symbols at that, for the people who can least afford to pay.  But that is the nature of poverty, as I have discovered over the years.  The poor are not poor because they lack money - far from it.  A lot of money passes through their hands, but they manage to keep little of it.  They spend what little they have trying to imitate wealth.  To the poor, wealth is something you buy, not money you put in the bank.

It reminds me of that scene in Driving Miss Daisy where Hoak says, "If I had what you had, I'd be shaking it around for everyone to see!" to which Miss Daisy replies, "That's vulgar!"  If there is a lesson there, it is don't be vulgar.  Real wealth isn't bought at the pet store or the car dealer or the clothing store or the shoe store.

Of course, the sad part of this pet story is that once the novelty of having the latest-and-greatest brand-name pet wears off - or the pet in question goes out of style - they are found, in plenty, at the local shelter.  But that doesn't mean they are a "good deal" to adopt.  I've seen more than one elderly person on our island try to adopt one of these fighting-dog mixes, only to end up in trouble.  At the very least, they end up falling down as these powerful dogs yank on the leash to chase a squirrel or cat, and Grandma ends up with a broken hip.

Pets can be a very expensive proposition, particularly if you don't have a lot of money.  Even basic feeding and care can cost well over $1000 a year - which may represent the bulk of disposable income for someone at or near the poverty line - or even someone making the median or average family income in the USA.   Of course, in such cases, such as the homeless with pets, the animals are fed scraps and never receive basic care, and thus suffer from preventable conditions, such as heartworm and the like.

With regard to bulldogs, some folks claim that these animals are born to suffer.  Bred to have a collapsed muzzle, they struggle to breathe on a daily basis.  This is how evil humans can be - we bred several lines of dogs (French Bulldogs, English Bulldogs, Pugs, etc.) for their looks, even as those looks make it hard for them to even breathe.  We are a selfish species, it seems.

I am kind of surprised that nearly a decade after my debit card was stolen, that French Bulldogs are still a "thing."   It just saddens me that people want a pet not for the companionship, but because of how the dog looks or because it has a particular pedigree, or more precisely, how much it cost. Like I said, I think many folks choose spouses the same way - hence the so-called "Trophy Wife" that is merely another acquisition parked in the garage between the Lamborghini and the Mercedes.

Is that any way to live?  Are people like that even happy?  I find it hard to fathom.