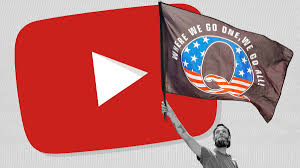 YouTube often suggests popular videos. This means they often suggest Qanonsense videos.
A recent article online claims that YouTube tends to suggest more conservative and conspiracy theory videos including Qanonsense videos, to people who are already clicking on conservative themed videos.
I thought this was interesting and I checked Mark's YouTube app on his phone and was appalled to find several Qanonsense-related videos listed there as suggested watching. Some of them are pretty subtle. For example, one claimed to be a biography of JFK Jr., but it was full of Qanonsense and the comment section included such bon mots as "Where we go one we go all" – which is the Qanonsense slogan.
It's not that Mark is watching conservative videos, rather that these are popular videos and the algorithm YouTube uses to suggest videos for users is based on not only what you have been watching but what other people are watching as well.  Unless you down-vote these videos or click on the upper right hand corner and say "Do not show this Channel" or "I'm not interested in this video" it will keep throwing stuff like this at you.
It is kind of funny and scary how his "feed" was all cooking videos, real estate videos, pottery videos, RV videos, boating videos - and Qanonsense.  It wasn't like he was clicking on conservative or political videos in the past - YouTube just started suggesting them.  And by "them" I don't mean political videos in general, or leftist or rightist videos, but extreme alt-right and Qanon videos.   What the fuck is up with that?
I checked YouTube on my own phone, and it was all WWII, airplanes, car crashes, and of course, knitting videos.  No Qanonsense, though.  But then again, I am more proactive in clicking on "Not Interested" or "Do not show this Channel".  People who don't do this are assumed to want to see everything, I guess.  That, or YouTube (Google) finds it profitable to make people go slowly insane (they probably click more and buy pallets of survival food online).
YouTube claims it is trying to erase Qanonsense videos or make sure they're not upvoted or promoted. But given the nature of the subject matter and how how subtly it is presented sometimes, they have a daunting task ahead of them.  Clearly their algorithms are not working.
And I am sure that Qanonsense believers are probably brigading these videos by upvoting them en mass using sock puppet accounts and 'bots and also making lots of comments which tends to make a video appear more popular on YouTube.   As the old saying goes, "like, comment, and share!" Those three things move your video up in the YouTube rankings which will generate more hits and the more ad revenue.
Linking to a video or site also brings it up on Google search results.  Google assumes that if a lot of people link to a video or website, then it must be "relevant" and useful.  But sadly, many times people link to things as an example of what is horrible, and this backfires by making the horrible thing move up the rankings in Google.   I was going to put one of these YouTube Qanonsense video links in this posting, but then I realized this would actually help spread it.
Even "documentaries" about Qanonsense, such as the three-part series, The Search for Q on Vice (that great source of truth) end up being little more than promotional videos.  There is no such thing as bad publicity, right?   And Vice knows this and realizes that by "exposing" Qanonsense, they are promoting it.
Makes you wonder whether the Scientology people are secretly funding their detractors - after all, what better way to keep their religion in the news?  If you aren't being persecuted, then what's the point?  All major religions are persecuted in one way or another - it only serves to reinforce the religion.
And sadly, attacks on Qanonsense will do just that. Many are already saying it has the makings of a religious cult and has attracted many fundamentalist and end-times Christians, who see its "teachings" as conforming to their end-of-the-world-view.   And after all, Qanonsense is like a Rorschach test - you can read into it what you want to.  Kind of jarring when you see white supremacists marching arm-in-arm with former Vietnamese refugees - I guess both see Qanonsense as a way of taking back their homeland.
But what this latest revelation about YouTube tells me is what I have slowly come to the conclusion over the last ten years - social media is evil and it cannot be fixed.   It is evil because human nature, left unchecked, is evil.  And social media, lacking any kind of relevant gatekeeping or editorial control, ends up embracing the worst in all of us.
Newer Post Older Post Home