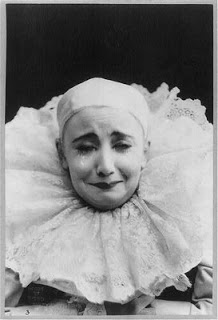 Why are we suppose to feel sorry for people?

A recent article online is annoying for two reasons - well, maybe more.  First is the title, claiming that people wanting to go to college are "Gobsmacked" which isn't even a word, at least in the United States.  I suspect the article in question is from a troll farm in the UK, loosely aligned with Russian interests.  No one says "Gobsmacked" over on this side of the pond, period.

Somehow this dreck ended up on USA Today, from "The Hechinger Report" (apparently named after the ill-fated lumberteria).  They write Op-eds that feel sorry for people, and apparently anyone can write for them, and some major newspapers use them as a text farm, from what I can read.  So it is possible the author is indeed from the UK.

But the really annoying thing about the article was this quote:

NEW HAVEN, Conn. – A few weeks ago, ahead of a nor’easter that unleashed biting winds and snow across New England, Alyssa Washington, a high school senior who wants to be a nurse, made her big college decision: not to go next fall.

The comments in italics are mine.  If you can't fill out a form online, can't figure out how to reset a password, can't write an essay - you shouldn't be going to college, period.  Odds are, you will flunk out if your skill levels are below the filling-out-forms-online level.
I understand where she is coming from.  When I was 18, I was pretty much depressed, living in a pot-and-beer stupor most of the time, and didn't want to bother with filling out the application forms.  Writing "essays" back then seemed like a chore - what could I say that anyone would want to read?
Now look at me - 40 years later, and I won't shut up!
But not being motivated to go to college isn't being gobsmacked or whatever, it is just maybe their soul telling them they don't want to go - that maybe they don't want to be a nurse.  If you want something badly enough, you'll go after it.  If you can't be bothered to fill out a few forms, well, that is your brain telling you that you really don't want it.  And that's OK - better to figure this out before signing up for a zillion dollars in student loans, then dropping out and having no way to pay it all back.
I was pretty lackadaisical about applying for college when I was 18, and not surprisingly, my initial academic career was pretty short-lived.  I flunked out after three years.  But after a few years of "working" I realized what I had missed out on.  I went back to school - night school - for another eleven years in all, because I realized that getting an education was valuable and the only way I would be able to have any kind of life at all.   Funny thing, filling out those forms didn't seem such a hassle, once I had that realization.
I am supposed to feel sorry for this lady?  Sorry, it ain't happening.  She'll figure things out, just as I did, or spend the rest of her life in low-pay service jobs.  That's the choice you are making, when you bail out of school because filling out the application is "too hard".
But like I said, maybe that is a good thing.  If you can't even fill out the application form, maybe you got no business going to college, period.  Not everyone should go to college.  If you doubt this, ask the barista at the coffee shop how college worked out for them - and how much they owe in student loans!
Newer Post Older Post Home