College Sports (For People Who Never Went to College) 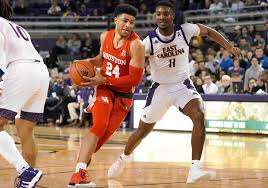 Why are people who never went to college, fans of college sports?  Why do people root for teams from schools they never went to?  It mystifies me - but there is money involved, which explains a lot.

We are camped in the middle of a group of Wisoconsites and Minnesotans.  Real salt-of-the-earth people, and I love hearing that rich Wisconsin accent, although some from the Cheese State don't seem to have a volume control.

Anyway, "the boys" are all gathered around the telly at their RV every evening watching basketball. That is to say, NCAA Men's College Basketball.  And it is exciting to watch, to be sure.  But what struck me as odd, is that most of these fellows never went to college and thus are rooting for teams that represent schools they have no affiliation with.   In some cases, they are rooting for teams not anywhere near their hometown, or indeed, even in their State.  What's up with that?

Before I go further, let me say that not going to college isn't the end of the world.  I have a friend who never went, but was an autodiadact - he taught himself mechanical engineering and refrigeration technology and went on to run his own business designing and building commercial systems.  He always has had this chip on his shoulder about not going to college, which I think was probably driven home by some clueless college-educated dweebs who gave him a hard time about it - sometimes they were his employees.

Going to college doesn't make you an expert in a field, or indeed, even qualify you to work in that field - you have to get work experience to do that.   All I can say is, every time I graduated from college, my reaction was the same:  "That's it?  But I don't know anything yet!"   You learn more in life than you do in school.  So college isn't for everyone, and in fact, as we are seeing, it can be an exorbitantly expensive waste of time for many.  If you didn't go to college, it doesn't mean you are any less of a person, in fact, you may be more of one.

But my friend also follows college basketball, at least for a college in his home State. To me, it is puzzling, as that really isn't "his team" anymore than it is mine.  And even attending some schools with reasonably decent basketball programs, I never felt any "team spirit" for our school - the teams were made up of players recruited from all over the country, and not locally.  You never saw the players on campus, as they took special "jock" courses, and lived off-campus in expensive luxury housing (paid for by the school).

So yea, rah-rah for the team and all, but I never felt it, particularly when you see how much money is involved - millions in television rights, and of course, the players rarely receive any of that.  And their "free education" is worth what they paid for it.  College sports are just feeder teams for professional sports - using up four years of some of the best productivity of an athlete, who can hope for, on average, maybe another five years of paid employment, if they are picked up by a professional team, before an injury takes them out.

Of course, cutting to the chase and dropping out of school and going pro is frowned upon, because, well, I'm not sure why.  College Deans are against this idea, of course - the sports franchises are money-makers for the schools, as one Dean of Students reminded me when a football player was accused (and convicted of) rape.  The College held their own trial and found him "innocent" which is a crock.  So maybe that is why I am not a big "fan" of college sports.  It is a plantation system, exploiting young (mostly) Black men for their free labor, all of whom hope to "make it big" and get endorsements from Nike and whatnot, and become the next Michael Jordan.  The odds, sadly, are pretty long, even if you are recruited to an NCAA team.  My suggestion - take the college part seriously and learn something.

Anytime someone talks about actually paying the college players who are bringing all this money into the school, well, all hell breaks loose!  "This is amateur play!  People do it for funsies!"  But the coach of the team is often the highest-paid employee in the school, and often the highest paid employee in the State.  He's not doing it for funsies.  He's not an amateur.

Sure, it is fun to watch a well-played, competitive game. But I am not a "fan" anymore than I am a "fan" of Lady Ga-Ga, who is also a money-making franchise, making money from "fans" who will do anything, pay anything, to show their allegiance to their Ga-Ga God.  Again, if you want to starve the 1%, stop giving them your money.  And when you go nuts over sports teams or a rock star - and pay hundreds of dollars for tickets or decorate your house as a monument to them, you are merely trading your drab little life for a very small piece of reflected glory, at quite a staggering cost.

I am not sure what got me going on this, and to you flamers and trolls out there, no, I am not "against" college sports, just I don't think they are so important to dedicate my life to.  Yet these nice men I met, who never went to college in their lives, could tell you reams and reams of statistics about their favorite college team, the coach, the players, and so on and so forth.  They didn't seem to know much about the actual college itself.  I am beginning to think that perhaps a lot of these colleges are little more than justification for a sports franchise - a profitable one where you don't have to pay the players.  Oh, sure, they bring in a couple of students and professors on campus to make it look legit, who can buy "oxygen" seats in the rafters for only $50 each, if they want to come to the games themselves.  Otherwise, the school part isn't all that important.

We went back to Syracuse last summer, and it was interesting how some things never change.  Acropolis Pizza, where I used to deliver wings and pies, is still there.  But the "Carrier Dome" is now getting a new hard-top, it seems, and I notice they no longer call it the "Carrier Dome" but "This Space Available Dome" as Carrier has faded from the scene as a defining industry of the Salt City.  Maybe they can go back to salt.

I just found it kind of odd these fellows where so devoted to these teams - from schools they never went to, or knew anything about, sometimes not even in their State.  How does one go about picking a team to be a fan of?   And why does someone pick one team over another?   I mean, I guess I could root for my "Alma Mater" but no one on the team today was there 40 years ago when I was a student.  Well, other than Jim Boeheim - damn, that guy has been around forever hasn't he?

But let's not kid ourselves - there is little difference between NCAA "amateur" basketball and NBA "professional" basketball, other than the pay for the players.

UPDATE:  A reader writes that Baseball, being created in an era where College was only for the elites, has a different structure as a result.  Sure, college baseball exists - so does college fencing, crew, and boxing.  Not many people pay attention to them, or pay to see them.  Baseball has "farm teams" that recruit talent, and you can be sent "up to the majors" or "sent down" to the minors, even more than once.   And farm team players are paid - although not much in some instances.

It is a more just approach to the labor problem, I think - and one that is more democratic.  A friend of mine left college to go play for such a farm team.  He told me, in all earnestness, that he didn't expect to make it to the majors, but instead he could play for a few years until he aged out - and live a lifelong dream of playing professional baseball.

But of course, such a system of "farm teams" would destroy the NCAA and its "amateur" rubric.   The colleges would revolt.  That is the problem - the system is so entrenched and so much money is involved - and the people with the money make the rules - that change isn't very likely.