Why I Open Junk Mail

Note:  This is an older posting that I just finished today. With more stimulus checks on the way, maybe it is still timely. 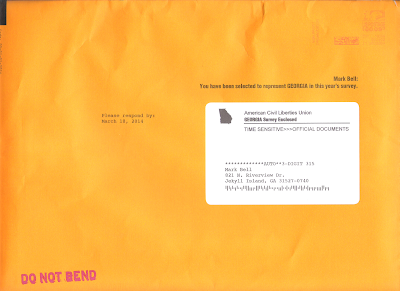 Throwing mail away without opening it first can be problematic.

There have been many articles in the paper lately about people throwing away their stimulus check, either the paper check from the IRS or the debit card that they are issuing to some taxpayers.

Of course, the easiest way to avoid this problem, as I noted before is to go to the IRS site and enter your banking information for automatic deposit. I received my stimulus check back on April 30th, without having any trouble whatsoever. About a month later letter came from Donald Trump claiming credit for it all.  Like most junk mail, I didn't believe it.

In the weepy stories I read in the press, a person throws away the debit card figuring it it's some sort of come-on or they actually throw away the stimulus check without bothering to open it. In one recent article, a couple's daughter throws away their stimulus check without opening it. I'm not sure why they're letting their daughter throw away their mail in the first place. It's not the daughter's place to make that call.

But that's one reason why I opened up all of our mail before I throw it away.  Probably 90% of the mail we get does end up in the trash.  But often times things can get stuck in the mail with those flyers and folders we get, that are marked "Carrier Sort."  We usually get a brochure at least once a week with coupons for the local fast food restaurant and things of that nature. Sometimes, a letter or other real piece of mail gets stuffed into these brochures and if you throw away the brochure you might be throwing away valuable mail.  So it pays to leaf through the brochure to check and then toss it, because coupons are just an inducement to spend, not a way of saving or making money.

Maybe this is an old habit from my days as a patent attorney. Long after direct deposit became popular, many of my clients would still pay me by check, mostly so they could play the float with me by telling me that they had mailed a check, when in fact they hadn't even bothered to cut it yet. Waiting to get paid as one reason I'm glad I'm no longer self-employed.  But nonetheless, I learned early on never to just toss out mail without looking at it carefully.  Sometimes a letter can be stuck inside a junk mail brochure and it pays to paw through this stuff.

Besides, sometimes it is amusing to see exactly what sort of cons they are pulling on the plebes these days. The latest gag from the local Toyota dealer is a tiny box with a battery and LED that "lights up" a secret code that could win me a free car!   I guess they think I am that stupid.  Toyota makes great cars and has some of the crappiest dealers - they think they are handing out gold ingots or something.  Nissan doesn't have as good a product, but they act more like you are doing them a favor, than vice-versa, when you buy from them.

Other times things can arrive which look like junk mail but aren't. For example a Communications from both Kia and Ford regarding my vehicles. Most of the time it's a come on for me to buy another vehicle at these go right in the trash. But other times these are notices of recalls or other problems with the vehicles.  The rest of the time, it is some pitch for an extended warranty and those go in the trash as well.

For example, the Ford has a beautifully counter-weighted tailgate which can be opened remotely with your key fob. You press the button and slowly opens up. The problem is, apparently sometimes they open up while you're going down the road, which would be rather inconvenient as all your stuff would fly out onto the highway.

I received a letter in the mail from Ford, which looked for all of it to be one of those come-ons for an extended warranty or an invitation to buy another car. Nevertheless, I opened up and read it and found out that they extended the warranty on this tailgate to compensate for the problem. I carefully placed that letter with my other documentation for the vehicle, should we have a problem down the road.

By the way, you do keep all your documentation for your vehicles in a nice folder or binder, right?  Please don't tell me that all the service records for your car - an asset worth tens of thousands of dollars - are wadded up in the glove box.   That would be pretty irresponsible, right?

I recounted before how Bank of America locked my checking account while I was away on vacation. Apparently they sent me a letter in the mail asking for my proof of citizenship and what I did for a living. Apparently some computer kicked us out as being incomplete is part of some Homeland Security requirement. Since I never received the letter while I was traveling, I was mystified as to why my account was locked out. Many phone calls later I was able to get through to their Security Branch who was quite satisfied with my verbal answers over the phone.

Of course, I understand the motivation to throw away junk mail. Most of it, as the name implies is junk. It's either offers for raw deals or just stuff that waste your time. The credit offers and Loan offers to come in the mail are usually poor bargains. The come-ons with a local car dealer which come with a key attached to them and invited me to come in and test to see if it fits in a car or obviously just a way to try to get me in the showroom so you can strong-arm me into a new car.

But since I'm immune to these come-ons, it doesn't hurt me to open these envelopes just to make sure there's nothing important inside. Like I said it only takes me a few seconds to figure out whether something is a con-job or not. Usually, raw deals telegraph their nature with the use of large fonts in different colors and wild promises that sound too good to be true, because they are.

On the other hand I did get a mailing over a year ago from Capital One inviting me to open a money market account with them and promising me a $200 credit if I would deposit $10,000. I almost threw that away as junk mail until I reread it several times realize it wasn't a very bad deal, particularly since I had $10,000 parked in a savings account earning no interest at all.

By the way they're still offering that deal and in fact, they've sweetened it a bit, I believe. Of course it's not available to people already have an account, so I'm out of luck. And of course it's not available to people who don't have $10,000 to deposit. Once you have money, they offer you the best deals. If you don't have money you end up with the raw deals.

But throwing away your stimulus check? I really fail to see how that can happen. It's been advertised heavily in the media that this is going on and people should be looking for these checks. Not only that, several media outlets have advertised the URL for the IRS site so you can enter your direct deposit data. I've even reproduce that URL here.

No, keeping track of spending and keeping track of your Investments isn't sexy or fun. It can take 15 to 20 minutes out of each day, but in the long run leaves you more empowered and more free to do what you want in life.