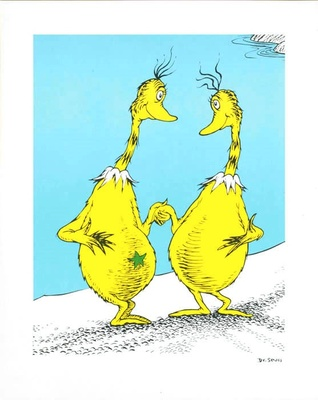 No, Dr. Seuss isn't any more racist than anyone else.

Today is Theodore Geisel's birthday.  Known professionally as "Dr. Seuss" his books guided a whole generation of youngsters and informed them of issues from racism (The Sneetches) to environmental issues (The Lorax).   To most people, he would be seen as a hero of the Left, and part of the modern era of progressive education.  But in today's culture, his early writings are being used to condemn him as some sort of KKK racist.  Worse than that, even his "progressive" writings are being condemned as not being progressive enough.

While no one is calling for "cancelling" his books, some of his very early works (when he was still in college) have clear racist overtones, and are not being reproduced (not that they were popular anyway). Others are calling for his books to be read, but put in context for young readers, so they don't pick up on subliminal racist undertones.  It kind of seems shocking to me, as the far-right had condemned Seuss for ages as indoctrinating children into progressive thinking.   The Left has turned in on itself.

Mr. Rogers, they're coming for you next, you white supremacist asshole!

On the other hand, if they "cancelled" Dr. Seuss, I don't think it would be the end of the world.  Literature has its ups and downs, its primary era of popularity, and then fades away.  Some survives the test of time, others are deemed out-of-touch or irrelevant to a more modern era. The problem is, particularly in some venues, that historically popular authors end up sucking all the oxygen out of the room, leaving no room for up-and-coming authors of a new era to stretch their legs.  It's OK to let go of some literature, over time.

For example, the comics page in the newspapers were dying long before newspapers died. If you looked at the comics section, half the "funnies" were from authors long-dead and gone, and now being drawn by a second- or even third-generation of artists.   "Blondie" for example, was a depression-era comic - but continues on today.  "Peanuts" had its heyday in the 1960's, and Charles Shulz is long-dead, but re-runs of his comics continue today - taking up space that maybe a new comic artist could have used.

Speaking of racism, Shulz had the same claims leveled against him - that his characters were all-white and there was no "diversity" (although Peppermint Patty did represent the LGBTQ spectrum).  So he introduced a black character, Franklin, who was given a few lines to say and then disappeared into oblivion.  Did that really help?  The creators of "South Park" faced similar criticism, and tongue-in-cheek added a character literally named "Token Black".   When you do a cartoon about a bunch of white kids living in an all-white suburb in Colorado, trying to make it racially diverse is sort of ridiculous.  I think that was their point, anyway.

While some of Geisel's early writings are clearly racist, for example, having anti-Japanese overtones, they were written while he was in college and during World War II.  Good thing he didn't have a Twitter account!   That's the problem today - anything you say can and will be used against you in a court of public opinion - which is why I am glad I am retired, I don't have to worry as much.

But his later writings were anything but racist. Which Geisel do we condemn and which do we embrace?  Well, to hear some tell it, there is no redemption, no second acts in American lives.  You say the wrong thing once, it is all over for you.  And once you are dead, it is too late to do a mea culpa apology tour, not that those seem to work anymore.

The other issue is, we are a nation that is 70% or more white, so it isn't "racist" to have a book or movie or comic strip with mostly white characters - or even all-white characters.   It is the reality of life in America, or indeed, most Western countries.   It is not racist per se to show a representation of reality - or is it?

But it doesn't end there.  One of Seuss' books that decried racism was The Sneetches and other Stories.  In that book, the story of the Sneetches is told.  They are creatures apparently from another world who discriminate against one another based on whether there is a star on their belly.  A clever salesman sells them a machine to add stars to the belly of non-starred Sneetches, and when everyone has a star, sells another machine that removes stars.  Eventually, the machines break down and the Sneetches can't remember who was starred and not-starred originally, and thus agree to recognize each other equally, regardless of appearance.   It was, in the 1960's a profound lesson of tolerance, and not a popular story with some folks in Southern States.

You would think this story would show that Seuss had second thoughts about racism and would at least partially redeem him.   Nah!  Can't have that!   Some argue that his story is lacking as while it preaches racial tolerance and equality, it doesn't go far enough in terms of restorative justice.   Where are the slave reparations for the non-starred Sneetches?  Where is the Affirmative Action?  It isn't enough to treat people equally going forward, we need to go back, generations, to correct injustices of the past.

Theodore Geisel is hardly an icon of white supremacy, the neo-nazis, or the far-right.  In fact, much of his popular children's literature espoused things like tolerance and open-mindedness (Green Eggs and Ham, for example).  His Lorax was a pro-environment piece that was arguably ahead of its time.  Do we judge him by that, or by his college and early writings?  Because if that is the standard we apply, then no one can write anything, at any time, because everyone is a little bit racist - particularly the authors of this so-called "study" that condemns Geisel.

Yes, everyone is a little bit racist.  Everyone.  I hear outrage from some corners when this is said.  "Black people, by definition, cannot be racist!" they shout, as if racism was only against "people of color" or something.  Well, I have news for you, white is a color, and yes, many people harbor negative stereotypes about white folks.  Everyone does this.  We harbor misogynist views as well.  Come on, the whole "Karen" thing is misogynist and racist as well - posturing that white women are a bunch of complaining and entitled, uh, witches - or something that rhymes with that.  We all wallow in that sort of stereotyping, too.  It's kind of fun - unless your name is actually Karen, of course.

Of course, white folks, being 70% of the population and owning everything, can take a little racism against their own kind. The sort of "discrimination" white people face is negligible.  But with "studies" like this, condemning progressive liberal whites, it seems that maybe it is on the rise.

The canard that Seuss was not "progressive enough" in his Sneetches story is sort of absurd. It would be akin to condemning white and Jewish "freedom riders" for not doing enough for the cause - even as many were assaulted and even murdered.  How far did Seuss have to go in order to be accepted then by today's standards?  Because today's standards, if practiced back then, probably would have ensured that none of his books would ever have been published.   The Sneetches story was taught to me in grade school in New York State in the 1960's.  I am sure it was on the banned-book list in Georgia in that era.

There is also an issue of cultural appropriation.  While it is a good thing to be supportive of causes for justice that are not your own, it isn't necessarily a good thing to take over those causes.  When you have white "Antifart" people leading BLM marches (and marring them with violence) it detracts, not adds.  When Lady Gaga decides to be the face of LBGTQ causes to make a buck or two, it isn't really helping us, just monetizing the cause for her own benefit, as I noted before.

Of course, the whole thing is a tempest in a teapot, and part of me thinks I should not even comment on it at all.  After all, the news sells controversy, and using this obscure "study" and some lame story about banning/not banning Dr. Seuss, is one way to sell eyeballs and generate click-through revenue.  I am sure Tucker Carlson will devote a whole show to the issue.  As the Post story linked above notes, no one is "cancelling" Dr. Seuss at this point - particularly not based on some obscure "study" from authors with sketchy credentials (who want to make a name for themselves, no doubt).

Sometimes it is just best to ignore nonsense like this and move on. While there are people dumb enough on the Left to go along with nonsense like this, it hardly represents mainstream thinking, on the Left, and certainly not that of Democrats in general.   In fact, you have to wonder if these sort of stories aren't being fanned and promoted by the far-right, who wants to make the Left look as ridiculous as possible.  Antifarts and Qanonsense - we slap those labels on each side, sticking our opponents with the worst example of their extremists.

I think Dr. Seuss is safe, for now.  But maybe it is time to make room on the bookshelf for some new authors as well!