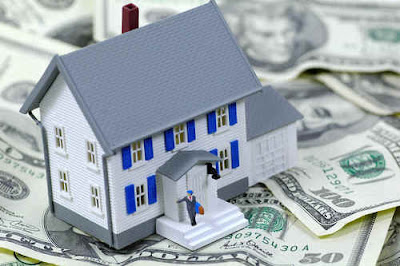 As more and more households face financial stress these days, many people are looking at the balances in their 401(k) or IRA accounts and wondering whether instead of struggling with mortgage payments, they should use the 401(k) or IRA money instead to just "pay off" the mortgage.

Is this a good idea or not? Like anything else, it depends on the circumstances. But in general, it probably is a bad idea, mostly due to the tax consequences.

If you are over 59-1/2, you can withdraw money from your 401(k) or IRA account without penalty. So for someone near retirement or contemplating retirement (or laid off late in life), such a move might be tempting. After all, if you've been laid off at age 60, you might not have the income to pay the monthly mortgage. But you might have the money in your 401(k) or IRA to pay it all off in one lump sum.

And as an "investment", a home these days, while not appreciating significantly, isn't likely to drop too much lower in value. People will still need places to live, and any home has a minimum value, even as a rental property. As a "safe" investment, it beats bonds and money market funds (offering 0.5% or less these days) in terms of the mortgage interest saved (5.5% or more) or even appreciation.

And since there is no 10%+ tax penalty for an older person, at least they don't get dinged that way.

However, there are other consequences.

For us younger folks, the consequences are more serious, as there will be a 10%+ penalty for early withdrawal tacked on top of that.

But many people are having this idea as of late (Google it and see) and it does illustrate the fallacy of our tax-incentive based system:
That is the problem with tax-based incentives, in a nutshell, and it does get one wondering why most of us spend our lives chasing after parts of the IRS code instead of doing what we want to do.  As I noted in my Should You Be Debt-Free? entry, using the tax code as an investment guide can be short-sighted.

Once you have invested money in your 401(k) or traditional IRA, it probably is too late to take it all out in one lump sum and pay off your mortgage - without devastating tax consequences. But the proposition does underscore the fallacy of using the IRS as your investment counselor. The overhead and transaction fees, not to mention the risk, in "loaning money to yourself" is rather high, as many of us are finding out, the hard way.

We put money in our 401(k) or traditional IRA and give it to financial institutions. We then borrow money from those same financial institutions in the form of mortgages. We thus put our lives at the mercy of bankers - and thus depend on the volatility of interest rates, property values, and stock prices.

Was this ever such a good idea? So long as stock prices continue to climb and interest rates stay low and housing prices are stable, it was a good model. When the whole thing reverses, however, we look on with envy at the guy who owns his own home, free and clear. Who's the Motley Fool now?

Some 401(k) mortgage plans allow you to borrow against the balance, provided you pay it back. The problem with this approach is twofold: First, the interest rate on such a loan is likely to be higher than on your existing mortgage. Second, the interest is not likely to be tax deductible, as it is not secured by the property. So as an alternative, I am not sure that is workable, either.

During the last election, President Obama discussed eliminating the 10% penalty in certain circumstances, to allow people to pay bills and save their homes. The proposition never came to pass, and it is not clear that it ever will, or that it could be used to allow you to pay off your mortgage. If such a proposal were passed, it would encourage people to cash in 401(k) money more freely, which would probably cause the markets to take a hit. So it likely will not pass.

Regardless of the political implications of the proposition, if you are considering such a move, it might be telling you something. If the monthly mortgage payment seems like too much dough, then perhaps you own too much house for your comfort and income level. Selling your home and moving to a smaller, cheaper place (or renting) might be a better move, in terms of cutting your cash flow requirements.

If you are over 59-1/2 and really want to do this, you should at least consider ways of reducing your tax burden. If you are laid off, for example, and are struggling to make the monthly mortgage payments, you might consider withdrawing from your 401(k) over a number of years, so that it does not put you in the next tax bracket and increase your tax burden.   Or at the very least, take out part in December and then the next part in January, so you can divide the amount over two tax years and hopefully put yourself in a lower marginal bracket.  Consult your tax adviser for more details.

But realistically, this may not work, as even a fairly small amount of money can put you in a high bracket, and if you stretch the payments out over, say, 10 years, then chances are, you are better off just making the regular mortgage payments. The net result is about the same. And hopefully, at this stage in life, you are at the point where the remaining mortgage payments are more principle than interest.

A better prospect might be to sell and move to a smaller home.  If you are stressed out over mortgage payments, that may be a sign you own too much home for your income bracket.   The advantages of this move are many.   First, you preserve your retirement account, so you have something to retire on.  Second, a smaller or cheaper home has lower taxes, insurance, and utility bills, so you cut your monthly overhead.   Third, if you have some equity in your existing home, you may be able to sell that home and buy a cheaper home and pay all-cash or take out a smaller mortgage.   Another option, of course, is to rent, and in many markets, the cost of renting a home is far less than the cost of owning - which makes no sense at all, but there you have it.

For younger people, the prospect of the increased taxes AND the 10% penalty make this an even worse proposition. Simply stated, there is no easy way to do this and not pay a staggering amount of taxes, at the highest possible rates.

You would have been better off getting a 15 year mortgage back when you bought the house....

Note that for an investment property, it may be possible to use 401(k) money in a self-directed IRA to buy a property for investment. This cannot be a personal residence, however. I looked into this several years back, and talked with an adviser with an investment company that would manage the money in a manner consistent with IRS rules. The problem with this approach, at the time, was that it required that the purchase price of the property be equal to or less than the money in my 401(k) account (and I could not aggregate the money with my partner's). At the time, my 401(k) account wasn't large enough to make such a lump sum investment.

(Note that the link above suggests that you can "loan money to yourself" in a self-directed 401(k), but I am suspicious that this sounds literally too good to be true. They also suggest, that, contrary to the advice I was given, that you can borrow money to buy Real Estate, in addition to the money from the 401(k). Approach with caution!)

I suppose some clever fellow could figure out a way to form a sub-S corp, invest his 401(k) money in that, in a self-directed IRA, and then have the sub-S corp buy his house, which he would then rent back. This would avoid the tax problem, as you would not be "withdrawing" from your 401(k) but rather "investing" it. But I suspect such an approach would raise the ire of the IRS, as it would be too self-serving.

In addition, at retirement, you have to take out a certain percentage of your 401(k) and pay taxes on it every year. I am not sure how this could be done in such a scenario. I guess you could take out a percentage of stock from the Sub-S corp and transfer ownership to yourself and pay taxes on the valuation of the stock. That would at least allow you to space out your tax problems, but might instead cause a cash-flow problem (where do you get the cash to pay the taxes on the stock?). And of course, how you valuate the stock might piss off the IRS as well.

It is an interesting thought, though. Weirder things have been done and are now part of the code. The Starker Deferred Exchange, for example, would never have occurred, if a fellow named Starker hadn't forced the issue at one time...