Why you don't want a BMW 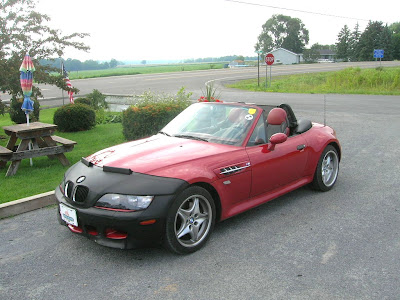 A BMW, like this M Roadster, can be a lot of fun. But do you really want to own a BMW? I own four, and I would not recommend them for most folks, due to the cost and difficulty of ownership.

People who don't own BMWs often think they are great cars and are under the misperception that, since they are so expensive, they must be "better" than their more plebeian Toyota.

But if you own a BMW for any length of time, you will realize, that like any other boutique made product, it is fussier, more expensive, and less reliable than mainstream fare.

When you make only limited numbers of a product, these effects are amplified by a factor of 10 or 100 or maybe even 1000.

For example, Chevrolet introduced the Chevy Cavalier back around 1983. It was a simple car, front wheel drive, four cylinder engine, with a 5-speed trans-axle or an automatic. They were cheap, fairly reliable and didn't rust too badly.

Nearly 30 years later, the same chassis soldiers on as the Chevrolet Cobalt, relatively unchanged, even in appearance, from its predecessors. While engine electronics and the body panel shapes have changed, the underlying drivetrain is pretty much the same. And why not? It is not like the design mission has changed in the interim.  Point A to Point B, period.

And in that interim, as millions upon millions of these cars rolled off the assembly line, common problems and defects of the vehicle were made known, and over the years, various design changes made to prevent such problems. So, while not a superstar by any means, these pedestrian cars will easily go 150,000 miles without much difficulty or intervention on the part of the owner, other than to put gas in them and occasionally change the oil.  Then you throw them away.

In contrast, consider my 1999 M Roadster, of which BMW made only a few thousand copies of. Only about 400,000 copies were made of the underlying Z3 chassis. And while it may share engine and driveline components with other cars of the marque, many parts are in fact unique. And since the car was in production for only a few short years, there was little time to find common problems and design solutions for them. And in terms of complexity, the car has twice as much technology as most cars.

In short, a BMW is more likely to be a less reliable car than any more pedestrian mass-market car. So why do I own it? Well, it is fun to drive, and since I can repair it myself, most of the time, it is not too expensive for me to own. It is an expensive luxury - a toy - more than a piece of transportation.  And it is put together well.  If you work on a BMW, you can really appreciate the Engineering involved.  If you pay someone else to work on it, you just get the bill.

For the average person, owning a BMW can double, even triple or quadruple the cost of car ownership - and provide a mode of transportation that is often less reliable.   Unless you are a "car nut" and want a very unique car that handles a certain way, a BMW is likely not going to make you very happy. And in fact, for many people, it is a horrible mistake and nightmare.

To begin with, many people buy these cars for the worst reason possible - status. They will never admit it, but they want to impress the unknown "others" in the world with their flaunted apparent wealth.   But of course, we all know what they really are doing - living beyond their means and overspending on a car for the shallowest reason possible.

A simple BMW sedan can cost upwards of $50,000, or nearly twice what a more pedestrian Toyota would cost. Granted, it handles better, goes faster, and has all the status associated with a snob-appeal car.   But it costs twice as much. For most people, who are travelling from point "A" to point "B" the difference in the driving or riding experience is going to be negligable, particularly for the costs involved.

The warranty is shorter, of course, than most cars, and the amount of time it will spend in the shop, even if you are not paying for it, will be larger. When under warranty, this is merely an annoyance. Out of warranty, an expensive nightmare.

On many BMW boards, I read postings from people who buy these cars, not knowing what they are getting themselves into, and then I watch as they melt down over the never-ended expenses and costs involved. They overpaid for the car and now regret it, and now that staggering repair bills are added in, they realize that they really can't afford the car to begin with.

Since they are not handy with tools - and naive enough to take the car to the dealer, once the warranty has expired - their repair bills are staggering.

As I noted in my BMW Fright Pig entry, used BMWs can be a particularly dangerous trap, as one with "only" 70,000 miles on it could need thousands in repairs in short order - everything from oxygen sensors to a whole new suspension, to an overhauled cooling system.

As I noted in my Are you Over-Insured? entry, if you can't afford to walk away from what is parked in your driveway, you probably own too much car for your income level. If you live in a $250,000 house, chances are, you really can't "afford" a $70,000 BMW. In terms of proportion of your overall income and estate, it is too large an asset to be on wheels. And yet, I see such cars, parked in front of houses that are quite pedestrian, if little more than hovels.

I have enjoyed tinkering with my collection of four BMWs (yea, hate me). But I realize, even at age 50, that driving cars that "require my constant intervention" (as one former BMW owner put it) will get old very quickly. As I lurch toward retirement, I look on with envy, at my neighbors and their 200,000 mile Toyotas which are still on their original clutch, and rarely, if ever, break down.

There will come a time when I put down my wrenches, put away the Voll Synthase, Mann Filters, ATE Super-Blue, and all the other paraphernalia of BMW maintenance and just learn to enjoy owning a car and driving it. Perhaps some boring Toyota, or a Passat Wagon. And maybe, once a year, I'll wax it. Maybe.

So don't feel you are "missing out" by not owning a BMW. Making your life less complicated and easier is probably a better solution all the way around, anyway.
Newer Post Older Post Home