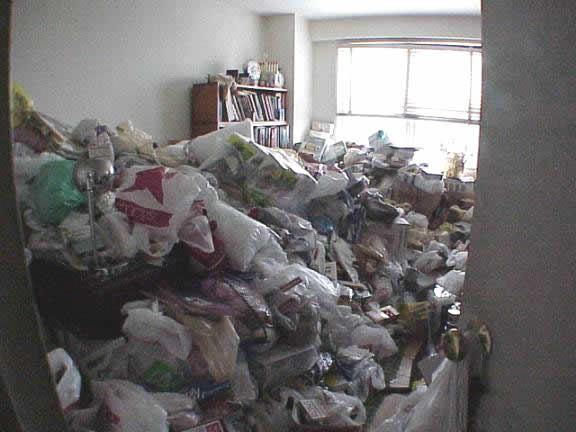 Hoarding Disorder doesn't just happen. It sneaks up on people a little bit at a time. Being proactive in discarding things is one way to prevent this from happening.


Hoarding Disorder is becoming a more noticeable problem in this country. In addition to the raised awareness of the problem, I think there are other factors making this almost an epidemic. Mental illness is on the rise, I believe, as more and more people disassociate themselves from reality (aided by the television and other skewed social norms). Our extreme wealth (largely unnoticed by most Americans) allows us to accumulate more and more. Even recycling and environmental efforts are to blame, as it becomes harder, in many parts of the country, to even throw things away. Hoarders can now argue they are enviro-friendly "recyclers."

But beyond the problems of the hard-core hoarder, as illustrated above, is the tendency of most Americans to accumulate "junk". Most American homes are filled to the rafters with "stuff" they neither want nor use. Outdated electronics, old documents, gifts and souvenirs, free things that seem "too good to throw away", parts and bits that "I might need someday".

The typical American home is crowded with "things" and as a result is not an attractive or restful place to be. Many Americas have their garages packed with boxes of junk, while their expensive cars sit outside in the elements. Put the cars in the garage, throw the junk in the trash, not vice-versa!

The problem with all this stuff is that the reasons we save it all are identical to the reasons the hoarder gives in keeping old paper bags. "Someone might need this someday," they say, "And they're too valuable to throw away!" A hoarder might say that about their bag collection, but a non-hoarder might say the same thing about an old jar of rusty screws.

And the common refrain of many people is, "Well, it doesn't cost me anything to keep it."

The latter is particularly not true. If you have a piece of something that has even a residual value, and you have no realistic intent of using it, sell it. Otherwise, it will just decay or become obsolete and eventually be thrown out as junk (by you or your heirs) and no value will come of it.

I came to this realization the other day when we moved our patio lounger. It was an elaborate affair we bought in the Keys - the sort of beach cabana that the resorts use. While it fit perfectly by our pool, it was crowding our small dock by the lake and we rarely used it. I put it on Craigslist and a week later it was gone - and I had $125 more in my pocket. If I had kept it on the premise that "It doesn't cost me anything," I would have tripped over it for a number of years, until one day it decayed to the point where I would throw it away. By selling it, I get $125 and someone else actually uses it.

Obsolete electronics is another form of clutter many folks have. Old computers, monitors, televisions, tape decks (remember those?), cell phones, telephones, and the like, all crowd closets, basements, attics, garages, drawers, and the like. They are old, obsolete, and partially or fully broken. Yet we feel that they might be "worth something" and hang on to them. After all, we paid a lot for them at one time, it seems a shame to throw them away!

With the switch to digital television and flat-screen TeeVees, many Americans are finding that their old "tube" TeeVees are horribly obsolete, even though they still work fine. If you are not using it, sell it at a garage sale for a dollar - it is probably cheaper than trying to throw it away!

With audio equipment, the same is true. Records and Tapes are obsolete. And CDs are already on the way to becoming obsolete, in favor of digital storage devices. Cassette tapes are not making a comeback. And despite the occasional articles about the vinyl freaks out there, records are not making a comeback either. Sell or discard this stuff. Your record collection might be worth a few bucks to a vinyl freak, but then again, probably not. Your drugstore copy of "Boston" that you played until the grooves wore out is not a "rare collectible" but just a worn-out record. There is a huge distinction between the two!

And there is the rub with hoarding disorder and how it sets in to all of us. We see an article in a magazine, on TeeVee, or online, about how such-and-such is now a "valuable collectible" and we start to think that maybe our worthless junk is "treasure in the attic". The folks at "Antiques Roadshow" really should be horsewhipped for making people believe this nonsense.

You see this all the time in the car business. An immaculately restored and rare car fetches $1M on the auction block, so Cletus thinks his rusted out '87 Camaro is worth at least a hundred grand. It is a skewed perception of reality.

The other problem people have is that they think "Well, if I discard something, suppose I need it later?" And of course, the answer is, there will always be one or two incidents where you toss something out and later wish you hadn't. But to keep mountains of garbage on the premise that you might need one thing is foolish. Moreover, there reaches a point where you have so much junk, you can't find the thing you need - which is the same as having thrown it away.

Paperwork is a big problem here. Many folks save records from 10-20 years ago. "You never know when you might need that document!" they say. The IRS only audits back 7 years, so there is little point in keeping records older than that. So they drown in boxes and boxes of old papers. And since they are afraid of throwing away something valuable, they can't part with these old boxes of junk without going through them, page by page, which takes hours and hours, so they never do it. Or if they do, they spend five hours and throw away maybe 50 pages. This is not a cost-effective use of your time!

Here's a hint: If you are archiving old papers, put them in a box, and mark it with a date and a "destroy by" date. When the time comes, you can just toss the box in the trash pile, rather than having to go through everything in it.

Keepsakes, mementos, photos, and other "treasures" can be a problem as well. It is nice to have a few such things, but after a while, they can clog your life. While it can be fun to go back through such things and reminisce, the actual opportunity to do so might not present itself ever, in your lifetime - or your children's lifetime.

For example, my Mother took endless photos during her life. When she died, no one was really interested in taking over custody of her hundreds of boxes of 35mm slides. Since no one does "slide shows" anymore, and the context of the slides was largely lost with the death of the author, it is doubtful that anyone will ever view such things again. And transferring several thousand slides to a computer is not a task for the faint of heart. So the slides languish in a closet somewhere, until some day they will disintegrate into dust and eventually get thrown out.

I was chagrined to be foisted off with all of her genealogy materials when she died. I have no heirs, so no one will be interested in the family history once I pass away. Yet none of my siblings was interested in this stuff, even though they have offspring who might want to know, someday, where crazy Grandma got her crazy from. Off to the burn pile it will go, in my lifetime, or after I am dead.

Uploading such things to the Internet is one way of preserving them and perhaps making them available to future generations (provided they are cached somewhere in perpetuity). But few people think of this. Left in a box in the basement, they are on water-heater flood away from mildewed oblivion. What is the point in that?

Free things are also problematic. So-called "Gimmies" or "Goodie Bag" materials you get at conventions, often emblazoned with the logo of a sponsoring company. That ashtray seems too nice to throw away, yet you don't smoke. The thing to remember about such things is that they are worth what you paid for them. So while your nicely embroidered ID badge holder seems "too nice to toss", in reality it is just clutter once the convention is over. Many an office becomes cluttered in this manner, with logo'ed hand exerciser balls and post-it note pads.

Books are another problem area. Yes, they have value, and yes, it is nice to have a "wall of books" in your study. But when they start taking up boxes on the floor, the basement, or the attic, you may have a problem. Electronic books and readers are not some far-out future invention anymore - but a reality. Within the next 10 years, paper books will go the way of vinyl. Does this mean your worn-out paperback copy of Catcher in the Rye will be worth millions? Hardly. Hardbound books, particularly first editions or early editions are, and will be, worthwhile to own. If you have them, put them in a nice bookcase. If you have them in a box in your cellar, sell them before they mildew. But the airport paperback spy thriller you read on the plane? Disposable, largely.

You can sell the books you no longer want on Amazon and other outlets, and thus realize some money from the transaction. In fact, some folks make a business of this. If you have boxes of books in your basement, attic, garage, or anywhere that is not a book shelf, you may want to ask yourself why.

And that is an interesting point. As I noted in my earlier posting on Hoarding Disorder, one characteristic of the hoarder is that they don't take care of their things and let them degrade and get destroyed over time. When you toss something in a 120-degree attic, you are letting it degrade. Keeping it in your barn, garage, or basement - same thing. If you really want to hang onto something, then make an effort to take care of it - in climate-controlled storage. If it doesn't seem worth the hassle, then ask yourself why you are keeping it.

Owning things is a form of slavery. If you own enough "stuff" you become a slave to your possessions. Eventually, the mental weight of all these things can be enough to crush you - and for hoarders, this is a literal risk.

But for the rest of us, clutter in our homes and daily lives can have an effect on our psyche - even if it doesn't morph into full-blown hoarding disorder.

Being proactive in getting rid of "junk" is a good way of preventing hoarding tendencies from starting. Throw away things you don't need, don't use, have no intention of using, or don't want. Make it a periodic habit to clean out rooms and view them with a critical eye. The problem with junk is that it accumulates slowly over time, until and we don't even notice its there.

Doing things is better than owning things. That is the topic for my next blog entry...
Newer Post Older Post Home